Gabriel wrote a letter to EU leaders slamming Turkish President Erdogan's politics and calling for the bloc to scale back its relations with Ankara. His statements underline an icy relationship with no thaw in sight. 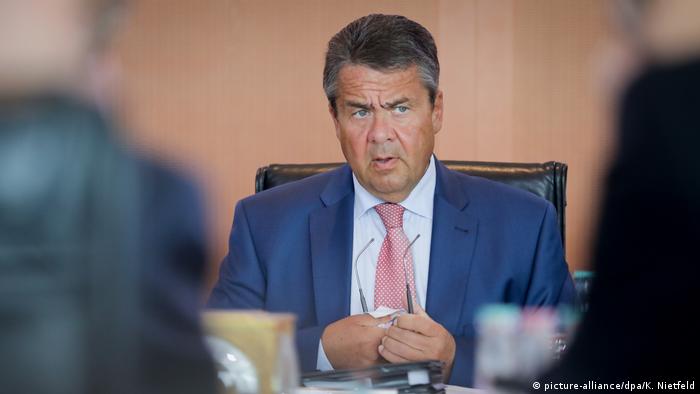 Der Spiegel saw a letter from Sigmar Gabriel dated July 24 to EU top diplomat Federica Mogherini and the Commissioner for EU Enlargement Johannes Hahn. In it, the German minister described Erdogan's politics as being "in blatant contradiction to our European value system and (demanding) a clear answer."

Gabriel's words reflect a growing tensions between the EU and Turkey. The EU has criticized Erdogan's government for imprisoning alleged supporters of terrorism, including German-Turkish journalist Deniz Yucel, and purging thousands of perceived political opponents from the ranks of government, education and military after the failed July 2016 coup.

Germany has also pulled its troops from the Turkish airbase in Incirlik after a spat over access to the base.

Read more: What is Turkey's Incirlik air base?

In his letter, Gabriel called on the EU to reduce pre-accession help provided to Turkey. The non-EU member country has been in full membership talks since 2005. The talks have stalled for years.

Gabriel additionally outlined that aid should only be provided within the framework of initiatives that foster democracy and rule of law in order to assist Turkish civil organizations instead of Erdogan's government.

His proposals for harsher measures also extended to the realm of Turkish businesses. The foreign minister said that the European Investment Bank (EIB), the union's non-profit lending institution that seeks to foster European integration and social cohesion, should curtail its financial support for future projects in Turkey.

"The basic principle should be that we do not attempt new business initiatives right now," Gabriel wrote, in relation to EIB financing.

Gabriel's letter was dated one day before Mogherini, Hahn and EU affairs minister Omer Celik met with Turkish Foreign Minister Mevlut Cavusoglu in Brussels to discuss the relationship between EU and Turkey including future membership in the bloc, immigration and Turkey's demands for visa-free travel for its citizens.

In the aftermath of the meeting, the EU leaders announced that Turkey's long-standing desire to join the EU had been frozen for the time being, although talks between Brussels and Ankara would continue.

Other politicians across the EU have called upon the bloc to take a stronger stance against Turkey. The European Parliament in Strasbourg held a non-binding vote in early July to suspend membership talks with Ankara.

The European Council also resolved not to open new areas in membership talks with Turkey.

Turkey's request to join the EU has yet to be formally suspended.