The Trump administration's top trade adviser, Peter Navarro, has again lashed out against Germany and China for their trade surpluses with the US, saying they pose a risk to American security and prosperity. 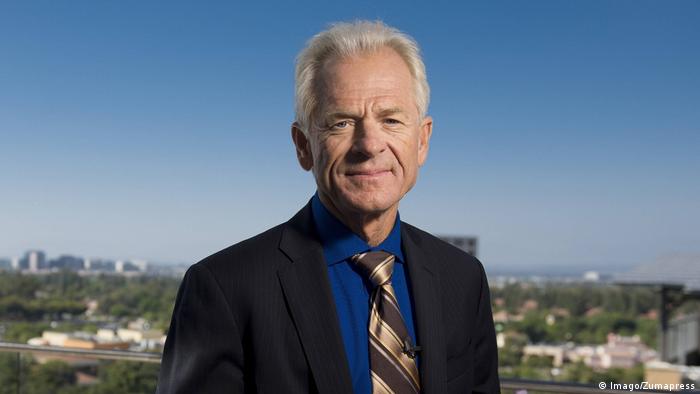 Previously lambasting Germany and China as "currency manipulators," the director of the White House National Trade Council said on Monday that the US trade deficits with those countries and others could cause a loss to American freedom and prosperity.

Speaking at a National Association of Business Economics conference, Peter Navarro argued some of America's trading partners used the proceeds from export sales to buy US companies and technology, reducing America's self-reliance.

As he singled out China and Germany in particular, he said that "in the real world of fixed exchange rates, managed floats and outright currency manipulation" the US trade deficit could not adjust as economists said it should in theory.

That would lead to large and persistent trade deficits, he added, which would leave the US open to foreign takeover.

"Suppose it is not a benign ally buying up our companies, our technology, our farmland and our food supply chain, and ultimately controlling much of our defense industrial base. Rather it is a rapidly militarizing strategic rival, intent on hegemony in Asia and perhaps world hegemony," he warned.

New data showing Germany's staggering trade surplus is likely to feed into US President Trump's protectionist rhetoric. But he has to realize that a strong German economy is also a boon to the US, says DW's Henrik Böhme. (09.02.2017)

China exports surge amid trade spat with US

China has reported better-than-expected trade data for January, pointing to greater demand both at home and abroad. The fresh figures came as Beijing prepared for likely trade stand-offs with the US president. (10.02.2017)

As an example, Navarro noted that there was only one US company currently capable of repairing the propellers on Navy submarines.

Donald Trump's top trade adviser even painted the picture of the US threatening to lose "a broader cold war" not by shots fired but by "cash registers ringing."

"Might we lose a broader hot war, simply because we have sent our manufacturing and defense industrial base off-shore," he added rhetorically.

Currently, China accounts for nearly $350 billion (330 billion euros) of the US trade deficit, which is about half the total. Navarro accused the country of being engaged in a "conscious strategy" to dramatically increase investment around the world, including in the US and in Germany, where it was buying "one company a week."

He also promised a backlash from the Trump administration aimed at "eliminating currency manipulation and other forms of trade cheating," with the goal of reclaiming "the supply chain and manufacturing capability," as well as creating a level playing field.

Navarro announced that the US Treasury Department would issue a report next month looking into China's currency policy to see if the yuan was kept artificially low, which could result in trade sanctions. He noted it was clear that "historically, the Chinese have taken aggressive policies to make sure the currency is undervalued."

With regard to Germany, which accounts for $65 billion of the US trade deficit, he said that this was "one of the most difficult trade deficits that we're going to have to deal with."

Germany has claimed that it is a member of the European Union and couldn't hold independent trade talks with Washington to tackle the issue.

"That may or may not be true," Navarro said, adding that an upcoming visit by Chancellor Angela Merkel to Washington on March 14 would be used to "have candid discussions with Germany about ways we could possibly get that deficit reduced outside the boundaries and restrictions that they claim that they are under."

During his speech, Navarro also dismissed as "obvious alarmism" that the Trump trade threats - including a planned border tax on imports of 20 percent - could provoke a trade war.

The Trump administration's focus was on eliminating cheating and dumping in the US market, he said, with the broader goal of US trade policy being "not to raise tariffs or non-tariff barriers, but to encourage our trading partners to lower theirs."