The US president's legal team has forced a delay that means he will not have to hand over tax returns to prosecutors for the time being. Trump's lawyers say he should be immune from investigation while in office. 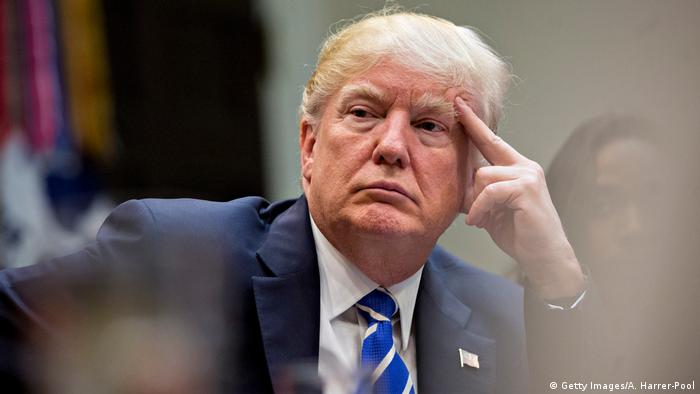 There were mixed results for Donald Trump's legal team on Monday, when the US president won a reprieve from handing over his tax returns after his case was roundly dismissed by a judge.

Manhattan District Attorney Cyrus R. Vance Jr. has called for Trump's accounting firm to turn in eight years' worth of business and personal tax returns. The request is in connection with an investigation into the payment of hush money to two women who claimed they had had affairs with the president.

Read more: Trump discussed people 'like Biden and his son' with Ukrainian president

Trump's lawyers say the proceedings by Vance, a Democrat, are politically motivated and that Trump should be immune from prosecution for as long as he is president.

However, District Judge Victor Marrero said Trump and his team were making a "categorical and limitless assertion of presidential immunity" that would be unacceptable.

"That constitutional protection presumably would encompass any conduct, at any time, in any forum, whether federal or state, and whether the president acted alone or in concert with other individuals."

Marrero dismissed the claim of broad immunity, saying that it was "extraordinary" and "an overreach of executive power."

Trump's lawyers immediately filed an appeal with the 2nd US Circuit Court of Appeals, which granted a temporary stay of Marrero's ruling "pending expedited review."

Why the interest in tax returns?

The prosecution wants access to Trump's tax records as part of an investigation into alleged hush-money payments. The president is accused of having affairs with two women, including the adult film star Stormy Daniels, while married.

The case involves Trump's former lawyer Michael Cohen, who is serving a three-year prison sentence for crimes that included campaign finance violations in connection with the hush money.

Cohen, who made the payment to Daniels which was ruled an illegal use of campaign funds, claims that this was ordered and reimbursed by Trump himself — a possible criminal act.

It's unclear what light the returns might shed on the payments.  Trump's opponents have long been eager to get their hands on the president's tax returns but — breaking from a tradition followed by previous presidents — he has steadfastly refused.

Prosecutors have also said publicly that Trump — who has denied having an affair with either woman — was aware of the illegal payments, but he was never charged.

Even if used in the case, the content of the tax returns may be kept under wraps from the public.

The unfolding criminal investigation in New York comes as Trump finds himself increasingly besieged in a rapidly moving impeachment drive.

US: 500 ex-prosecutors say Trump should be charged with obstruction

Donald Trump tried to fire Robert Mueller and intimidate witnesses, hundreds of US ex-prosecutors said in a letter. They added that Trump would have faced an obstruction charge if he were not the current president. (07.05.2019)

The revelation by The Wall Street Journal was related to a whistleblower complaint about Trump. The US president said it was "dumb" to think he would say something inappropriate in phone calls with foreign leaders. (21.09.2019)