Testifying before the US Congress, Donald Trump's longtime lawyer Michael Cohen described the US president as a "racist," a "cheat," and a "conman" who never expected to win the 2016 presidential election. 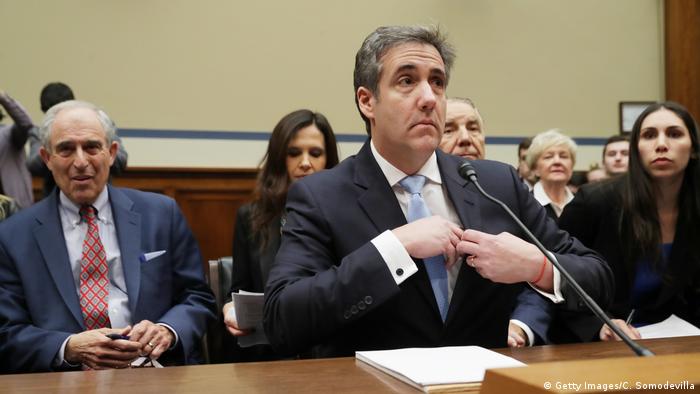 US President Donald Trump's former "fixer" and longtime lawyer Michael Cohen testified before the US Congress on Wednesday in a hearing that saw him repeatedly lash out at the president.

In his opening remarks, Cohen said Trump "never expected to win" the 2016 election and that Trump spoke of his presidential campaign as "the greatest infomercial in political history."

Trump's former lawyer also testified that the president told him black people were "too stupid" to vote for him.

The president "wrote a personal check" as a hush payment to adult film star Stephanie Clifford, alias Stormy Daniels, Cohen said on Wednesday. Trump allegedly provided a check to Cohen while already serving as president and discussed the payments with Cohen in the White House.

"He asked me to pay off an adult film star with whom he had an affair, and to lie to his wife about it, which I did," Cohen said. "I am giving the Committee today a copy of the $130,000 wire transfer from me to Ms. Clifford's attorney during the closing days of the presidential campaign that was demanded by Ms. Clifford to maintain her silence about her affair with Mr. Trump."

Cohen pleaded guilty to his role in arranging the payments, and prosecutors in New York said in a December court filing that they believed the president ordered the payments to protect his campaign.

Trump knew of Democrat email leak ahead of time

Cohen also addressed the hacking of the Democratic Party ahead of the 2016 election, which eventually saw Wikileaks release a trove of hacked emails that were damaging to Trump's rival, Hillary Clinton.

"A lot of people have asked me about whether Mr. Trump knew about the release of the hacked Democratic National Committee emails ahead of time," Cohen said. "The answer is yes."

"Mr. Stone told Mr. Trump that he had just gotten off the phone with Julian Assange and that Mr. Assange told Mr. Stone that, within a couple of days, there would be a massive dump of emails that would damage Hillary Clinton’s campaign. Mr. Trump responded by stating to the effect of 'wouldn’t that be great,'" Cohen said.

Cohen said Trump had lied about having no business interests in Russia in the run up to the 2016 election. The then-presidential candidate "knew of and directed" negotiations on building a Trump Tower in Moscow during that time, Cohen said.

Cohen previously admitted that he had lied to Congress when he said that efforts to build the property ended in January 2016, when in fact it continued until the middle of the year.

On Wednesday, Cohen said that Trump did not "directly" tell him to lie to Congress about the talks. 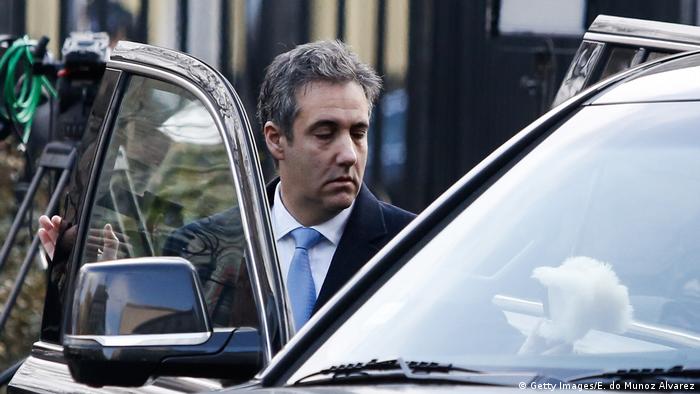 Cohen pleaded guilty and will serve time in prison

Cohen also denied having "direct evidence" of Trump's campaign colluding with Russia. "But, I have my suspicions," he said.

The 52-year-old ex-attorney then described that a conversation he had overheard between President Trump and his son Donald Jr. in which they referred to a meeting, which Cohen then speculated was the meeting with a Kremlin representative about "dirt" on Hillary Clinton.

President Trump has admitted that the meeting took place, but denied having any knowledge of it.

The ranking Republican on the oversight panel, Jim Jordan, questioned Cohen's credibility, given his guilty plea for lying to Congress and other crimes.

Examining Cohen after his testimony, Jordan accused him of slandering Trump due to the lawyer's "selfish motivation" and due to his bitterness about not being offered a job in the Trump administration.

Another Republican lawmaker, Tennessee Congressman Mark Green, slammed Cohen as a "fake witness" and his presence in Congress as "a travesty."

Cohen also fired back at the Republican lawmakers, claiming they "protected" the president.

"The more people that follow Mr. Trump as I did blindly are going to suffer the same consequences that I'm suffering."

A congressional probe into alleged Russian meddling in the 2016 US election has expanded to include Trump's personal attorney, Michael Cohen. US media cited Cohen as confirming he had been approached by the Congress. (30.05.2017)