Donald Trump Jr. says a Russian lawyer he met didn't reveal compromising material about Hillary Clinton. His comments came after he published an email that offered sensitive information from Russia on Clinton.

In a televised interview on Tuesday, US President Donald Trump's eldest son denied a meeting with a Russian lawyer during the 2016 election campaign had yielded potentially explosive information about Democratic presidential candidate Hillary Clinton.

"It was just a nothing. There was nothing to tell," Donald Trump Jr. told Fox News.

"It was literally just a wasted 20 minutes," he said, adding that he didn't tell his father about the meeting because it had been inconsequential.

Hours earlier, Trump Jr. released an email thread that showed him discussing an offer to receive damaging material on Clinton, his father's rival in the White House race.

In one reply, at the prospect of Russian help in defeating the Democrat, he said: "I love it."

Trump Jr. said he had shared the emails "in order to be totally transparent" as accusations of collusion with Russia over the 2016 US presidential race continued to amass.

In his interview with Fox, the 39-year-old admitted: "In retrospect I probably would have done things a little differently," before conceding that the Russian offer was considered important research on Trump's rival.

President Trump meanwhile lauded his son's attempt to fully disclose the dealings: "My son is a high-quality person and I applaud his transparency," Trump said in a statement read to reporters by White House spokeswoman Sarah Huckabee Sanders.

Sanders added that it was "ridiculous" for the press to talk of perjury and treason in reference to the emails, after Democrat Senator Tim Kaine said Trump Jr. had gone "beyond obstruction of justice."

The emails are the first documentary evidence disclosed showing that a Trump family member was willing to accept a meeting with a Russian government source in order to help Trump score favorably in the 2016 election.

The private meeting, first reported by the New York Times, is just one of the many threads in a deepening scandal surrounding Trump's road to the White House. Several Congressional and FBI investigations are looking into whether Trump's entourage colluded with Moscow to influence the outcome of last November's presidential vote.

Trump Jr., in addition to being the president's son, was deeply involved in his campaign.

The email exchange in question took place with music publicist Rob Goldstone, who suggested that his contacts in Russia could "incriminate" Clinton, based on her past dealings with Russia.

Goldstone told Trump Jr. in the email that his contacts had information that could "provide the
Trump campaign with some official documents and information that would incriminate Hillary and her dealings with Russia and would be very useful to your father.

This is obviously very high level and sensitive information but is part of Russia and its government's support for Mr. Trump." 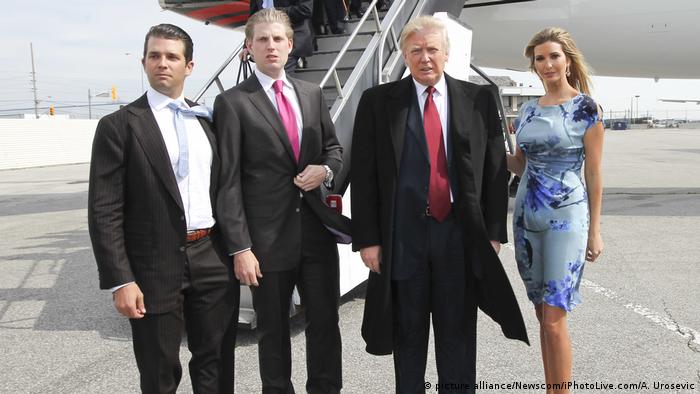 Donald Trump's children are among his closest advisors

The meeting with lawyer Natalia Veselnitskaya reportedly took place in June 2016 at Trump Tower in New York. Trump Jr., however, claimed that no valuable information on Clinton was exchanged, and that the Russian attorney mainly spoke about adoption policies between the U.S. and Russia.

Late on Tuesday, Republican Senator Chuck Grassley, chairman of the U.S. Senate Judiciary Committee, demanded to know why Veselnitskaya had been allowed to enter the country in June 2016 as her visa had expired the previous January and her request for an extension was denied.