US President Donald Trump says the inquiry takes away "the power of the people," while Secretary of State Mike Pompeo seeks to prevent testimony from State Department officials. 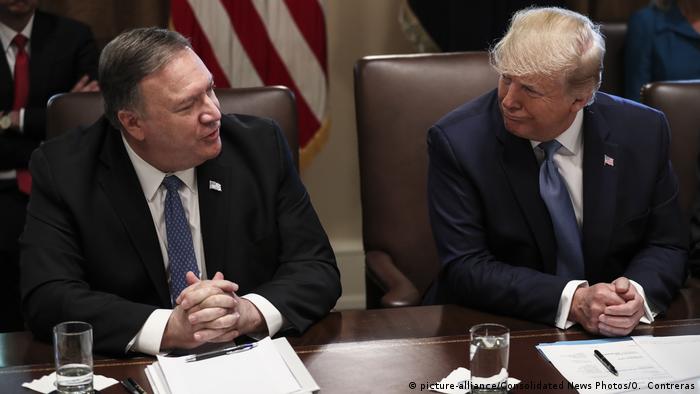 The administration of US President Donald Trump was defiant in the face of an ongoing impeachment inquiry Tuesday, resisting Congress' access to witnesses as Democrats warned that concealing information on Trump's dealings with Ukraine could result in punishment.

On Twitter, Trump lashed out at his political rivals, and called the impeachment inquiry a "coup" that intends to "take away the power of the people."

Trump's tweets followed a letter released by Secretary of State Mike Pompeo accusing the Democratic committee heads leading the inquiry of attempting to "intimidate, bully and treat improperly the distinguished professionals of the Department of State."

Pompeo has reportedly tried to delay five current and former State Department officials from providing documents and testimony in the impeachment inquiry. Democrats accused Pompeo of "stonewalling" the investigation.

"I will use all means at my disposal to prevent and expose any attempts to intimidate the dedicated professionals whom I am proud to lead," Pompeo said.

"Any effort to intimidate witnesses or prevent them from talking with Congress — including State Department employees — is illegal and will constitute evidence of obstruction of the impeachment inquiry," said a statement from Adam Schiff, Eliot Engel and Elijah Cummings, the three House Democrats leading the impeachment inquiry.

The statement also said Pompeo should  "immediately cease intimidating Department witnesses in order to protect himself and the president."

Pompeo has previously stated that he doesn't believe any State Department official acted inappropriately in contacts with Ukraine's government.

Since last week, the White House has been pitted against Democratic lawmakers who launched an impeachment inquiry based on whistleblower accusations that Trump abused his office by seeking dirt from Ukraine on Joe Biden, a 2020 election rival.

Trump has called the inquiry "the greatest witch hunt in the history of our country."