The lawyer for the anonymous whistleblower has pointed to statements from Donald Trump as evidence of a threat against his client. Verbal rampages by the president against his opponents meanwhile show no sign of abating. 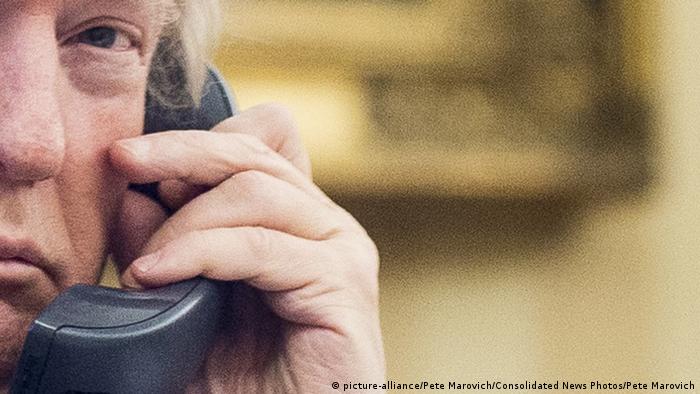 The whistleblower whose revelations triggered an impeachment inquiry against US President Donald Trump now fears for his life, his lawyers said on Sunday.

He cited Trump's barely veiled threats of capital punishment as cause for concern.

Trump told a closed-door meeting of US diplomats on Friday that whoever gave compromising information to the whistleblower was "close to a spy," and that "spies and treason" used to be handled "a little differently than we do now."

Read more: How Ukrainians are reacting to the Zelenskiy-Trump affair

"The fact that the president's statement was directed to 'the person that gave the whistleblower the information' does nothing to assuage our concerns for our client's safety," Bakaj wrote about Trump's comments.

"Moreover, certain individuals have issued a $50,000 [€46,000] 'bounty' for 'any information' relating to our client's identity. Unfortunately, we expect this situation to worsen, and to become even more dangerous for our client and any other whistleblowers, as Congress seeks to investigate this matter."

He called on leaders from both political parties to reaffirm their support for whistleblower protection and denounce retaliation.

Democrat Adam Schiff, the leader of the House Intelligence Committee in charge of the impeachment investigation, told ABC an agreement had been reached with the whistleblower to appear before the panel, saying he hoped he would appear very soon.

Schiff said they were still trying to arrange security clearance for his lawyers and ensure they kept the identity of the whistleblower secret.

Trump repeated his attacks on the whistleblower on Sunday evening in a series of posts on Twitter.

He said he wanted to meet "[his] accuser," as well as "the person who illegally gave this information" to the whistleblower. "Was this person SPYING on the U.S. President? Big Consequences!" he wrote.

The US president on Monday also directed another implied accusation of treason at Schiff, seeming to refer to comments the latter made in parody of Trump's call to Zelenskiy at a meeting of the House Intelligence Committee last week.

"Rep. Adam Schiff illegally made up a FAKE & terrible statement, pretended it to be mine as the most important part of my call to the Ukrainian President, and read it aloud to Congress and the American people. It bore NO relationship to what I said on the call. Arrest for Treason?" Trump wrote on Twitter.

In another weekend tweet that aroused criticism even among Republicans, Trump cited a comment made by a conservative pastor who said on the talk show "Fox & Friends Weekend" that removing the president would provoke a "civil war-like fracture" in the US.

Republican Adam Kinzinger tweeted about his concern at Trump's comment on Sunday.

"I have visited nations ravaged by civil war. ... I have never imagined such a quote to be repeated by a President. This is beyond repugnant," Kinzinger wrote.

Trump lashes out at impeachment 'scam'

Donald Trump has warned the "country is at stake like never before" as an impeachment inquiry against him picks up steam. Top Democrat Nancy Pelosi says public opinion now supports the investigation. (29.09.2019)

The whistleblower said Trump's actions in a phone call with Ukraine's leader were "a violation of law or executive order." The White House was also accused of attempting to conceal "all records" of the call. (26.09.2019)