President Donald Trump said anyone who fed information to the whistleblower was "close to a spy," alluding that the person committed treason. He also said there should be a way to end impeachment inquiries in the courts. 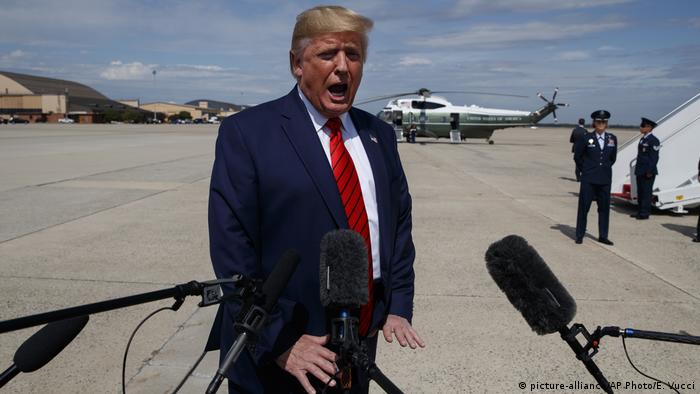 US President Donald Trump lashed out on Thursday at Democrats, the press and the whistleblower's sources, all at the center of the impeachment inquiry that was launched this week.

The president spoke bitterly at a private breakfast in New York in honor of US ambassador to the United Nations, Kelly Craft and her staff. His remarks were obtained by The New York Times and the Los Angeles Times newspapers, from a source who was at the event and recorded them.

The New York paper also reported, citing sources familiar with the whistleblower's identity, that the man is a CIA officer who had been detailed to work at the White House but who has since returned to the intelligence agency.

Asked about Thursday's hearings on the released whistleblower complaint, which accused him of seeking foreign interference  in the 2020 election, Trump said it was "a terrible thing" for the country and accused House Speaker Nancy Pelosi of having been "hijacked by the radical left."

Pelosi: 'This is a cover-up'

Pelosi said the information provided by the whistleblower needed close scrutiny. "This is nothing that we take lightly," she said.

The House leader said the allegation that the White House tried to conceal records of the call was an attempt to "hide information of a political nature."

"This is a cover-up," Pelosi told reporters, adding that it was "a sad week” culminating in her embrace of impeachment.

Her counterpart in the House, Republican leader Kevin McCarthy of California, defended the White House decision to "lockdown" the details of Trump's call.

"Could I see why you'd want to put it on a more secure server?" McCarthy asked. "I think in the world of technology today, yeah, people should secure what's going forward."

Meanwhile, at the White House, spokeswoman Stephanie Grisham said the president had "nothing to hide” and that the complaint was "nothing more than a collection of third-hand accounts of events and cobbled-together press clippings."

Secretary of State Mike Pompeo told reporters he believed all actions taken by his department's officials were "entirely appropriate," but did not address claims Trump's personal lawyer, Rudy Giuliani, that the State Department tasked him with reaching out to Ukrainian officials.