Pro-Russian rebels in eastern Ukraine and Kyiv-based President Petro Poroshenko still rule out a truce. His government forces say they control routes around the rebel-held cities of Donetsk and Luhansk. 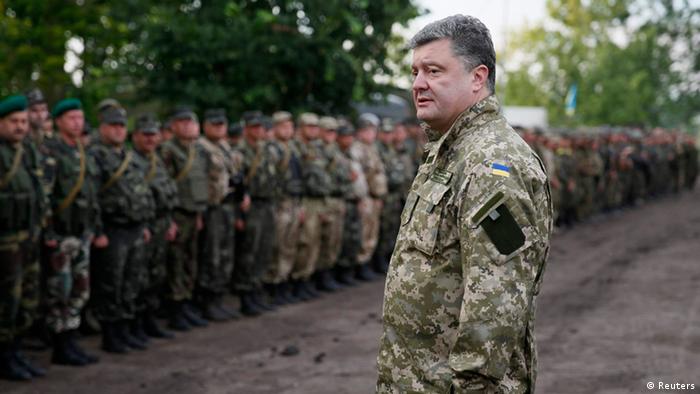 On Tuesday, Poroshenko (pictured) visited Ukrainian troops in the former rebel stronghold of Slovyansk and said he would only talk with the "real masters" of the steel and mining region. He also vowed to win back the two key regional cities.

Ukraine's military said Wednesday it controlled all routes in and out of both centers, including Donetsk with its 1 million population.

The French news agency AFP said German Chancellor Angela Merkel and French President Francois Hollande would make a joint telephone call to Poroshenko on Wednesday to press him to enter into talks with the rebels.

In Moscow, Russian President Vladimir Putin was to discuss the Ukraine crisis with Federica Mogherini, the visiting foreign minister of Italy which currently holds the rotating EU presidency.

EU leaders reportedly hope that a new truce and a Kremlin promise not to meddle can take off pressure to impose Western sanctions on Russia to avoid damaging energy deliveries.

The Kyiv government on Wednesday accused Russia of holding a Ukrainian woman officer Nadezhda Savchenko, 33, who was allegedly abducted by rebels in June near Luhansk while she was fighting with a pro-government militia.

Russian investigators said Wednesday that Savchenko, a pilot, was suspected of tipping off Ukrainian troops about the presence of two Russian television journalists who were killed by mortar fire last month.

Lithuania has been a vocal advocate of stronger EU ties with Ukraine.

Russia, meanwhile, said it had approved the candidacy of the former US ambassor to Kyiv, career diplomat John Tefft, to become Washington's new envoy to Russia.