Ethiopia is adamant it will not be strong-armed by the US in talks to end the Grand Ethiopian Renaissance Dam dispute. As the US swings from observer to power broker, the stalemate is splitting the Arab world and Africa. 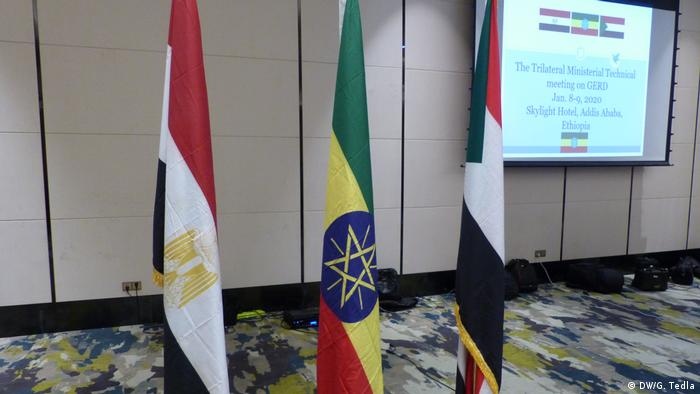 The Grand Ethiopian Renaissance Dam (GERD) is a massive hydroelectric power plant being constructed on the Blue Nile in Ethiopia. In mid-January, Egypt, Ethiopia and Sudan reached a preliminary agreement aimed at clearing the way for the filling operation of the $5 billion project on the Blue Nile. That was after years of wrangling that saw Egypt threaten military action against the dam. But over the past week, a statement by the US mediators has triggered a fresh stalemate.

On February 28, US Treasury Secretary Steven Mnuchin cautioned Addis Ababa not to start filling the dam as planned before a final agreement after Ethiopia stayed away from a followup meeting in Washington. The following day, Ethiopia's Foreign Minister Gedu Andargachew slammed the US for being "undiplomatic" and called for continued talks to settle unresolved matters.

Ethiopia has criticized the US for diverging from its role as mediator. Talk of US bias in the process it is meant only to observe, alongside the World Bank, is doing the rounds in Ethiopia, with some analysts seeing Washington's strong support for Cairo as a means fostering US leverage in the Middle East.

Egypt has taken sharp aim at Ethiopia, accusing it of boycotting the last Washington round and warning that it will use all means necessary to safeguard its interests. 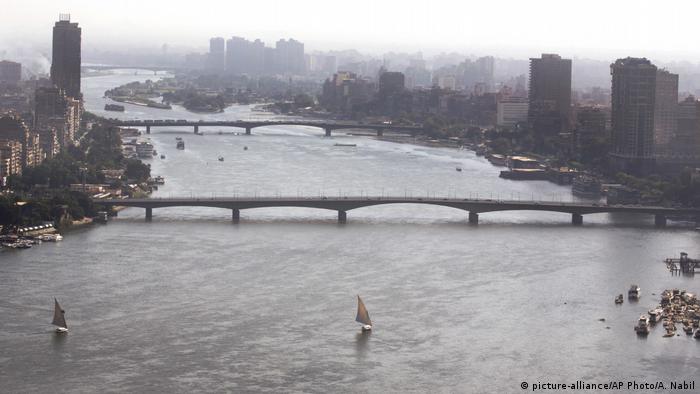 "The US and the World Bank's role does seem to have extended beyond being observers and actually they have been involved in drafting an agreement, obviously using the input of the negotiators from the three countries, and it's that draft agreement which Ethiopia has rejected," said William Davison, Senior Analyst for Ethiopia at the International Crisis Group.

Ethiopia does seem willing to continue with talks, however. "I am told that Ethiopian negotiators are preparing their own draft agreement which they will present to the other parties. So it looks like the talks will continue in one form or another," said Davison.

Egypt's claim to a right to the waters of the Nile under a British colonial deal versus Ethiopia's push for a new equitable arrangement for the Nile Basin countries is likely to remain a sticking point. "That disagreement will probably continue to be a major factor and a major obstacle," Davison told DW.

On Tuesday, the White House made public the assurance of support President Donald Trump gave his Egyptian counterpart Abdel Fattah el-Sisi on the phone over the dam project negotiations in the face of the Ethiopian outcry.

On Thursday, the Arab League weighed in too, asserting Egypt's historical rights to the waters of the Nile. The bloc said it rejected any unilateral action by Ethiopia to fill and operate the dam in the absence of a deal with the downstream countries. Sudan declined to support the resolution. The country is reportedly wary of open confrontation between its partners in the dam negotiations.

Ethiopia on Friday condemned the Arab League's 'blind support to Egypt" but praised Sudan over its "principled" stance.

The dam has been the source of a major dispute since it was announced. The main contention is its reservoir, which has a capacity of more than 74 billion cubic meters and will be flooded to form an artificial lake. In the past, Ethiopia has said it wants to fill the reservoir as quickly as possible — ideally within the next seven years — to ensure the dam can operate at full capacity as soon as possible.

In turn, Egypt has accused Ethiopia of dismissing its concerns about water security, especially in the case of drought. Ethiopia built the dam and now that it is in the process of negotiating an international agreement on the details of the filling and operation of the dam, is saying that a new arrangement must be struck on how to share the Nile waters.

Various rounds of negotiations in the runup to the breakthrough had failed. As Egypt's President el-Sisi turned to Trump for mediation, Ethiopia's Prime Minister Abiy Ahmed turned to South African President Cyril Ramaphosa. The US has taken the lead.

Is the US a balanced broker?

"The United States is obviously under pressure, presumably from President Trump, to come up with a solution to this quickly. As a result, the treasury department has issued a statement that seems to agree with what Egypt has done so far," David Shinn, the former US ambassador to Ethiopia, told DW.

"That raises the question as to whether the US is taking a balanced position on the issue of the Nile dam project dispute. It is true that the US would like to have maximum support for its so-called proposal to deal with the Palestinian question. There has not been a lot of support for it from Arab countries, and it is possible that this could be a trade-off with Egypt."

Trump and el-Sisi are seen to be on good terms, while the US also has a strong institutionalized relationship with Ethiopia, according to Davison. "But ultimately, the sums involved are much bigger when it comes to US assistance to Egypt and Egypt's geopolitical role is also more important for the US. Another factor seems to be that President Trump has taken a personal interest in trying to achieve a Nile deal."

Shinn told DW: "You can't all of a sudden play the role of a binding arbitrator or you're telling one party or the other what to do. I'm not sure that it's  that point, but seems to be departing from the idea of good officers by the US to some kind of stronger role." 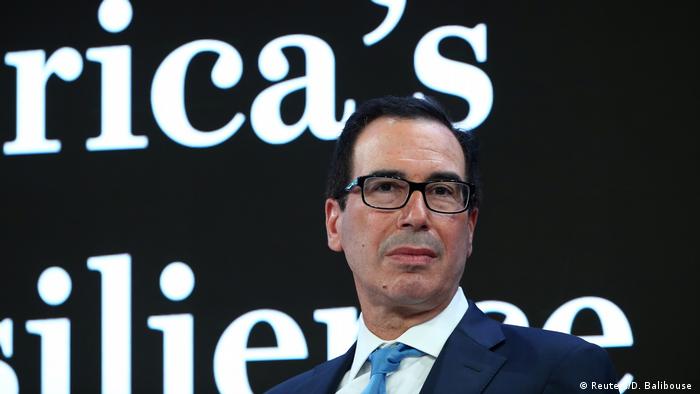 Africa behind the scenes

Not much has been made public officially about South Africa's efforts to end the dam dispute. Ethiopia's request came as President Ramaphosa assumed the role of African Union chair. "There is potential for that being turned into a sort of African-led mediation approach, but I'm not aware of any substantive progress yet," said Davison.

Other Nile Basin countries have had little say in the US-brokered talks between Egypt, Ethiopia and Sudan.

Ethiopia is one of Africa's fastest-growing economies. The dam is a much-need source of power for the country of 105 million people and fundamental to its economic development. The government is hoping the surplus energy generated by the dam can benefit its neighbors.

Joel Okundi Obengo, an independent researcher at Kenyatta University, says that downstream from Ethiopia, Africa's other Nile Basin countries may not be saying much over the latest stalemate and the US involvement, but they are following the situation closely.

The Grand Ethiopian Renaissance Dam is expected to address economic stability beyond Ethiopia. "Kenya, Rwanda, Uganda and Tanzania are actually actively involved because they are also having a stake in the sharing of the resources," said Obengo. "Their role has been muted, but they do it from the back rooms."

Time to bring in China?

Sub-Saharan Africa supports both Ethiopia and the new resurgence in hydro diplomacy taking place in Washington and likely to favor the US bid to broker a deal. "The US is perhaps also better placed than South Africa as mediators, given its ability to develop capacity and share knowledge. It is also in a better position to provide logistical support."

"I think that the US can play a very important role in negotiating this dam in Ethiopia. It is one of the key countries outside Africa that can bring about change, in terms of water security in the region," Obengo told DW. US expertise and knowledge, with technical data sharing, was essential to Ethiopia, he said.

Obengo says military intervention on the part of Egypt if Ethiopia fills the dam is unlikely. "But, this is where other African states will come in to fill the void and encourage active engagement between the two parties."

There is also room for other countries to help resolve the standoff over the dam, and bring specifically when it comes to the knowledge and expertise in seeing the dam project to its potential, he thinks.

"What I see is the possible role that China could play. To the Chinese, this dam is an economic issue - it means business and investment opportunities."

Obengo sees China's international diplomatic clout and its experience in building some of Africa's big reservoirs as a counterbalance to the US involvement in the Grand Ethiopian Renaissance Dam. "China and the US have worked on other projects to find a lasting solution, such as the Iran nuclear deal. They have their issues, but they sort it out between themselves."

Mekbib Shewa contributed to this article.

The three African nations have said they will continue trying to resolve a conflict over plans for a massive Ethiopian-run dam along the Nile river. The project has raised concerns about shortages of drinking water. (07.11.2019)

Egypt has long worried that Ethiopia's planned Grand Renaissance Dam will cut its share of the Nile River. Both countries tried to put fears of a water war to rest at a bilateral meeting in Cairo. (11.06.2018)