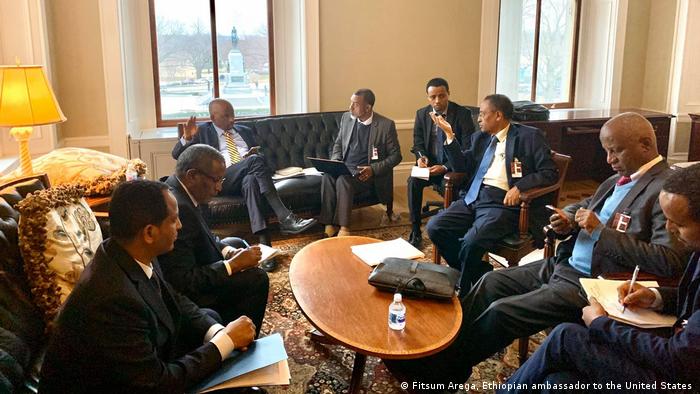 Egypt, Ethiopia and Sudan say they have reached a preliminary agreement aimed at clearing the way for the filling and operation of Ethiopia's $5 billion dam project on the Nile River.

The project, called the Grand Ethiopian Renaissance Dam (GERD), is around 70% complete and promises to provide much-needed electricity for Ethiopia's 105 million people.

Egypt, which gets around 90% of its water from the Nile, is concerned that filling the reservoir behind the dam too quickly could significantly reduce the amount flowing into its borders from the upper Nile basin.

The joint statement, released after three days of meetings in Washington on Wednesday, didn't give details on how long it would take to fill the dam, saying only that it would start in the 2020 rainy season and occur in stages.

Construction on the 6000-megawatt dam officially began in 2011 along the Blue Nile tributary in Ethiopia's northern highland region. 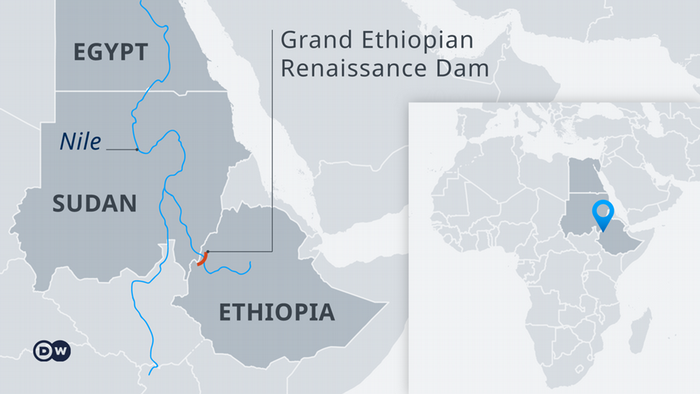 The dam has been the source of a major dispute since it was announced. The main contention is the dam's reservoir, which has a capacity of more than 74 billion cubic meters and will be flooded to form an artificial lake.

In the past, Ethiopia has said it wants to fill the reservoir as quickly as possible — ideally within the next seven years — to ensure the dam can operate at full capacity as soon as possible.

In turn, Egypt has accused Ethiopia of dismissing its concerns about water security, especially in the case of drought.

Previous rounds of negotiations, of which there have been many, had failed to reach a comprise.

At this week's meeting in Washington, the foreign ministers agreed that "there is a shared responsibility of the three countries in managing drought and prolonged drought."

"The mechanism for the "subsequent stages of filling" would be agreed at a subsequent meeting slated for January 28-29.

Egypt's farmers are already facing dry fields because of water scarcity due to a combination of factors such as rapidly growing population, climate change and antiquated irrigation systems. The United Nations has predicted Egypt will face an "absolute water crisis" by 2025.

The Egyptian government fears that Ethiopia's dam will make the situation worse.

However, some also believe Egypt's protests are about asserting its power in the region.

"It's not about technical [aspects], it's not about harming the downstream countries," Meressa Kassu, a senior researcher at the Institute for Security Studies, told DW.

"I think showing [their] power and hegemony in the region could be [Egypt's aim]," he said. "In the Declaration of Principles on the Grand Ethiopian Renaissance Dam, it is clear that any [upstream] countries will not significantly harm the downstream countries."

"The claims of the Egyptian government are not, by any means, supported by evidence," he told DW.

Why does Ethiopia want the giant dam?

Ethiopia sees the dam as fundamental to its economic development. Because of this, the government wants the dam completed as soon as possible as it seeks to transform the country into an industrial nation and boost the economy.

"The government expects a return on this investment," says economic researcher Abdela. "The issue that Ethiopia should complete the project [on time] is very important, otherwise prolonging the period of [construction] will further impact the economy."

Just half of Ethiopia's population of 105 million is connected to the main grid. Even those with access to electricity, including those living in the capital Addis Ababa, have to contend with frequent blackouts.

The government also hopes to export surplus electricity generated by the dam to neighboring nations.

"Our country has a problem when it comes to accessing electricity," said Kefal Egzo, a steelworker for the GERD project for the past five years. "So this project will be very beneficial for Ethiopia, and not only for us but also other African countries."

Maria Gerth-Niculescu in Ethiopia contributed to this article (AP, RTR).

South African President Cyril Ramaphosa has accepted the task, saying that a solution was surely possible. Egyptian officials have occasionally threatened military action against the dam. (12.01.2020)

The chief engineer of Ethiopia's most ambitious project was shot dead in Addis Ababa. The project had raised tensions with Ethiopia's neighbors, who have feared that their access to the Nile River would be disrupted. (26.07.2018)

Joint Statement of Egypt, Ethiopia, Sudan, the United States and the World Bank