Transgender refugees in Greece reclaim their dignity | Europe | News and current affairs from around the continent | DW | 08.07.2018

On the back of a groundbreaking court decision, two transgender refugees have found the freedom to start a new life in Greece. Marianna Karakoulaki and Dimitris Tosidis report from Thessaloniki. 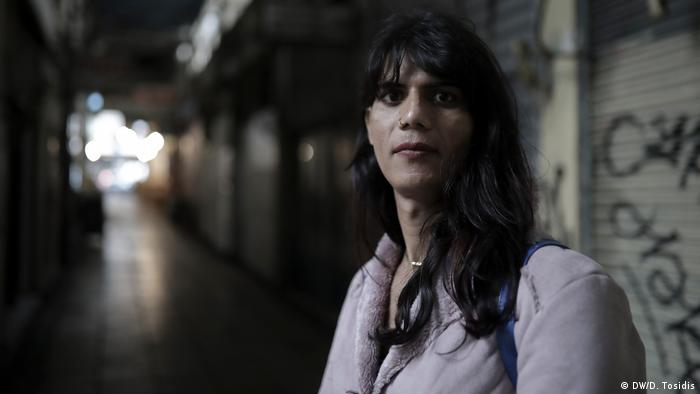 A couple of months ago, Natasha (pictured above) was anxiously waiting for her court hearing to start. Natasha's case was unique: Apart from the fact that she is a transgender woman, she is also a refugee from Pakistan who has received asylum in Greece. She is also the first transgender refugee woman who has applied for a gender identity correction in a Greek court based on a recent law that allows her to correct her gender and name from male to female in her legal documents.

Gabi, from Tunisia, was sitting right next to Natasha, holding her hand, until the moment the judge ordered everyone to leave the room. Gabi is also a transgender refugee woman who has been granted asylum in Greece. When Natasha decided to correct her legal gender, Gabi was very skeptical, she was not sure if she wanted to do the same. Now she is certain she wants to follow suit.

"I left my country, I lost my family, I lost everything. I have many problems because of my gender and my official name. I can't live with this name and with this gender. Of course it's very important for me to change them," she told DW.

The decision to flee 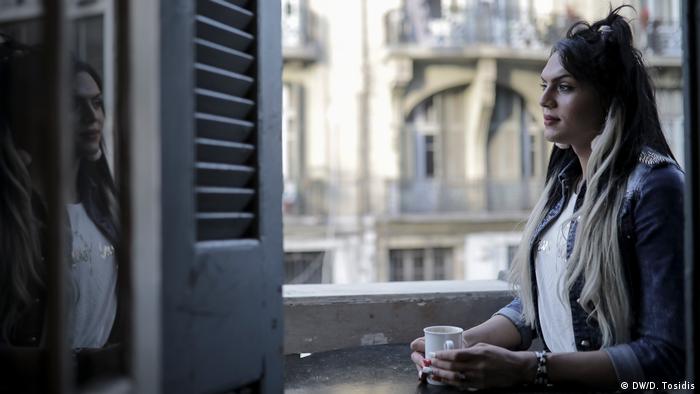 Gabi suffered abuse and harassment in Tunisia and Turkey, but says shes optimistic about her future in Greece

The decision to come to Greece was not easy for Gabi. In Tunisia she faced harassment on a daily basis. She had to stop her studies because her teachers and school mates made fun of her. At home she was not accepted by her family; especially by her brother and sister. She left home when she turned 18.

One day while she was in a taxi, she was stopped by the police, who requested her ID. Once the officer saw her gender, he arrested her.

"I was taken to a room, where they kept me for seven days. I was beaten and tortured. During my court hearing I was sentenced to one year in prison where I was tortured by other inmates. With the help of my mother my prison sentence was reduced to two months," Gabi said.

After she was released, she decided to go to Turkey where she had friends. She liked being in Turkey but she also faced harassment and abuse due to her gender.

"[The decision to come] to Greece was the most difficult decision I had to make. One day I said to myself: 'Gabi, do you want to live like this or do you want to have the life that you want?' So I left."

She arrived on the island of Lesbos and was taken to the Moira hotspot. Once other refugees realized that she was a transgender woman they staged a protest and threatened her. She was escorted out of the camp by the police and was given private housing which was provided by the UNHCR, the UN's refugee agency. Five months later she moved to Thessaloniki. 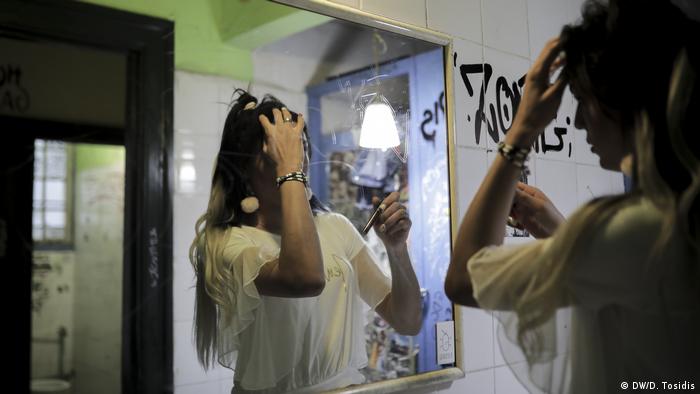 Gabi is taking course to become an interpreter in Greece

Natasha's journey was more complicated. She fled Pakistan in 2015 after facing constant abuse and harassment. Unlike Gabi, Natasha had no other choice but to travel as a man due to constant fear of her life. She stayed in Turkey for a few months where she worked as a tailor.

"I was working in Istanbul, but when I went out on the streets people were abusing me; they punched me, they stole my ID card. I decided to flee to Greece," she told DW.

She arrived in Lesbos after spending three hours on the sea inside a crammed dinghy.

Once she arrived on the Greek mainland, she went to work for a farmer in Skala Lakonias, in southern Greece, to earn money for the next part of her trip. However, the farmer refused to pay her. When she finally managed to leave the farm she went to Idomeni at the Greek-Macedonian border where thousands of people were waiting for the border to open again.

"There was one person from Pakistan in Idomeni who was hitting me and was torturing me. I only went out of my tent in order to get food," she said.

She was in a constant state of fear for three months until she met a Spanish volunteer who, with the help of a Greek psychiatrist, helped her to escape. Once in safety she was finally able to express herself freely as a transgender woman.

Both Gabi and Natasha have now settled in Thessaloniki, where they have found a strong community. They are both active members of Eclipse, a group of locals and refugees that provides support to LGBT refugees. When they speak about Eclipse their eyes shine.

Read more: Pride and a fight for LGBTQ+ recognition in Greece

"Now I have Eclipse and I finally feel happy. It's a safe place, especially for transgender people," Natasha said. 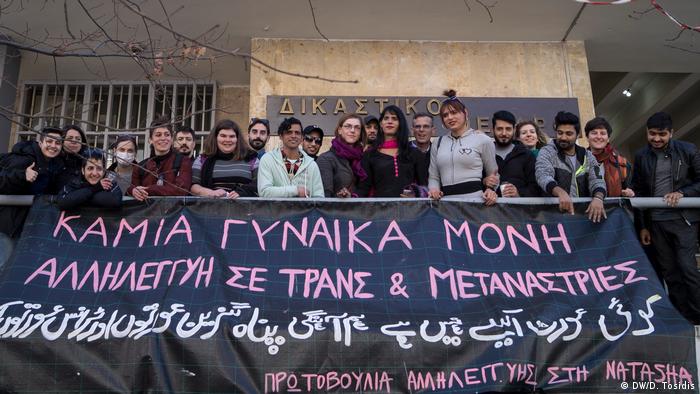 Support for Gabi and Natasha is strong. The banner reads: "No woman alone, solidarity to trans people and migrant women."

Eclipse organizes excursions and workshops that focus on issues such as hate speech, language lessons, computer lessons, group therapy and, of course, parties.

"The people in Eclipse do whatever they can do to make us happy and comfortable. They do everything, and I feel safe," said Gabi.

Natasha's court decision is groundbreaking. According to Aikaterini Georgiadou, one of the lawyers of the Hellenic League for Human Rights who represented Natasha, this decision could have an international impact.

"This legally established decision of a Greek lower court interpreted the Greek law in light of the Geneva Convention, the International Covenant on Civil and Political Rights, and the Greek Constitution. Even though there is no decision by the European Court of Human Rights for such a serious human right, this decision shapes the international and European reality and our legal culture," she told DW.

For Natasha, the decision was life-changing. She's finally feel free to express herself as she wants: "I am happy. I am no longer scared. Finally ... I am myself."

The UN health body has recategorized transgenderism, saying "evidence is now clear that it is not a mental disorder." WHO's international classification is used globally as a foundation to identify health trends. (20.06.2018)

German Foreign Minister Annalena Baerbock has tested positive for coronavirus and is cutting short a trip to Pakistan. The minister had just arrived in Pakistan as the first stop on a tour of several countries.