Pride and a fight for LGBTQ+ recognition in Greece | Europe | News and current affairs from around the continent | DW | 20.06.2017

Pride and a fight for LGBTQ+ recognition in Greece

Greece's LGBTQ+ community continues fighting for acceptance of sexual diversity. A sea of rainbow colors surrounding the White Tower of Thessaloniki last weekend was a good sign, with more than 15,000 people taking part. 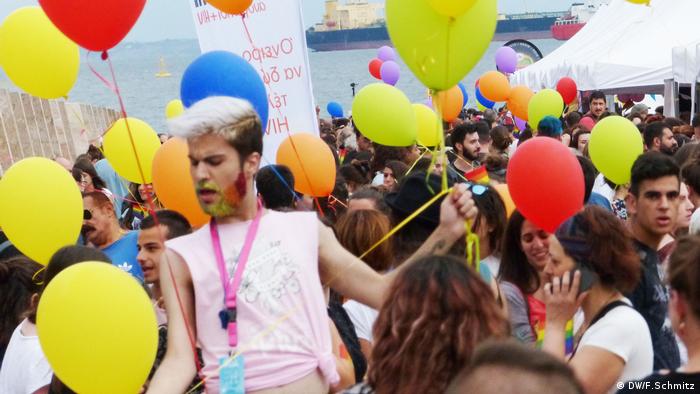 It is still a novelty for prominent figures to speak up for sexual freedom in a country where the Greek Orthodox Church continues to have a strong influence on politics. Ahead of the Thessaloniki Pride celebrations three years ago, for example, a representative of the church said no queer-identified people even lived in the city and that all the participants had traveled there from Greece's capital, Athens. "Priests continue to preach against sexual diversity," said Filippa Diamanti, a teacher and equality activist. "This is dangerous, it makes some people want to resort to violence."

The situation for queer people in Greece has generally improved since 2015, when the left-leaning Syriza government was elected. "Prime Minister Alexis Tsipras recently gave an interview to the gay magazine Antivirus - that's a small revolution," Diamanti said. Despite this, members of the LGBTQ+ community often face discrimination or even violence, whether in the workplace or privately. "We have to raise more awareness in schools and talk openly with students about sexual identity," Diamanti said. "Schoolbooks need to be rewritten, and educators need to be trained in such matters."

What many people consider everyday situations can remain battles for LGBTQ+ people in Greece, the psychiatrist Stavros Boufidis said. "Transgender people face discrimination on a daily basis, and they really do need to be wary of physical attacks," he added. In his view, Greek society is still not ready to accept the full diversity of sexual identities. "My clients often feel like prisoners," he said. "They have no control over their situation, and they feel alone. That can lead to depression and other psychological disorders - and, in some cases, even suicide." 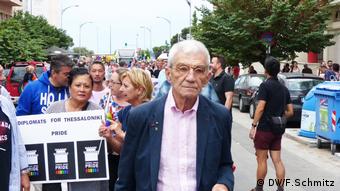 Last weekend's Thessaloniki Pride celebrations, one of the many summer pride parties that take place across the globe, were a positive step in showing LGBTQ+ people in Greece that they are not alone and that they can feel safe and accepted when living their sexual identities openly. "Originally there were lots of protests, but now people have gotten used to us," said Thanos Vlachogiannis, one of the festival's organizers.

There was still hate, of course. This year, for example, a woman joined the proud crowd only to wind up flying a Byzantine flag: a symbol of ultraorthodox and nationalist sentiments. "These people can't really love," she said. "They are living in sin." 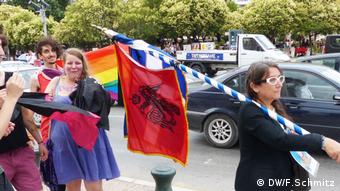 Boutaris has supported the Thessaloniki Pride festival since its inception in 2012. He even posed nude for a magazine, saying the event, which draws tourists from across the Balkans and neighboring Turkey, was a boon for Thessaloniki. "We have a duty as a democratic society to recognize diversity," he said. He added that there are also economic advantages to the festival: "It is one of the biggest events to be held in northern Greece. The hotels are full. The kiosk and restaurant owners are happy about the good business."

"We still have a long road ahead, but support in the general public has grown considerably," said Vlachogiannis, the Thessaloniki Pride organizer. He added that even cooperation with the police, who are known in Greece for their institutional homophobia, has become more positive. Vlachogiannis said he was also happy to see more heterosexuals go to the festival, because they see it as a matter of defending human rights.

A 39-year-old woman from Thessaloniki brought her family to this year's festival. "It's important for children to grow up without prejudice," she said. "Maybe one of my children might be in this situation one day, and I would want them to be welcomed by a tolerant society."

The 2018 brutal beating and death of activist Zak Kostopoulos aka Zackie Oh in Athens brought homophobia in Greece into the spotlight. The opera film 'ORFEAS2021' examines a political struggle.