Pakistan′s first school for transgender students opens | Asia | An in-depth look at news from across the continent | DW | 23.04.2018

The school is being widely lauded for its efforts to empower Pakistan's marginalized transgender community. But will it change the widely entrenched conservative mindset? Shah Meer Baloch reports from Lahore. 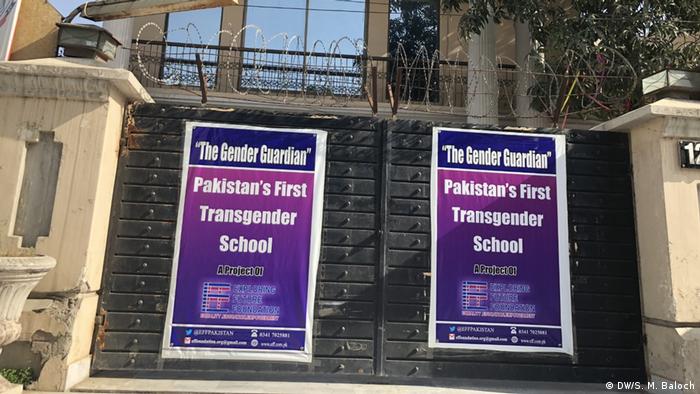 Located in Lahore city in the Punjab province, the Gender Guardian School — Pakistan's first school for transgender people — recorded 25 enrolments on its opening day, and has been hailed by human rights activists, lawyers, teachers and students as an unprecedented initiative to mainstream the marginalized community. A project of the NGO Exploring Future Foundation (EFF), the school currently offers training in eight fields, including cooking, fashion designing and cosmetics, and plans to introduce formal education soon.

"In Pakistani society, there are schools for disabled people, orphans and minority groups but there is no institute for transgender people. So we decided to come up with a proper educational system to empower and educate them so they can make a living and play a bigger role in Pakistan," Asif Shahzad, the school's founder, told DW on the school's opening day, April 21.

Shahzad added that the school aims to provide transgender students with a safe learning environment where they would not only study but receive career counseling too. "Our ultimate aim is to end the division among Pakistanis and permeate pluralism and tolerance in the country." 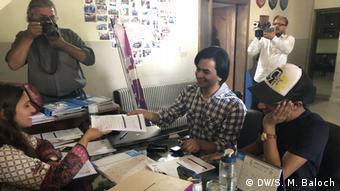 The school aims to help transgender people get opportunities and integrate into society, besides becoming role models to others in their community

"If the community is educated and gets empowered, definitely, they will avoid some unethical professions. So we will work for them so they can get rid of these negative activities and can be brought into the mainstream," Shazad told DW.

Transgender people face various challenges in conservative Pakistan, where they are often harassed and sidelined by society. In 2016, Alisha, a 23-year-old transgender activist, was shot seven times and rushed to the Lady Reading Hospital in Peshawar, where she died due to delayed treatment, reportedly because staff couldn't decide whether to place her in a male or female ward. Her friends blamed it on discrimination.

While constitutional and legal inroads have slowly been made into securing basic rights for transgender people, implementation has sometimes been slow.

The community was only allowed to vote in federal elections in 2011. Last year, they were recognized as a separate category in the national census. Although constitutionally they also have been granted economic rights, such as inheritance rights, it is not often felt in practice. Even religious groups abstain from taking part in the last ritual rights of transgender people as it is thought to be against Islam. 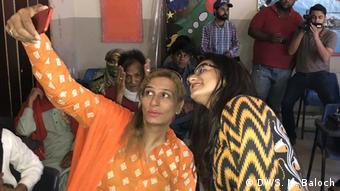 Transgender people face various challenges in conservative Pakistan, where they are often harassed and sidelined by society

This guru-chela relationship, similar to a master-disciple relationship, is a situation where transgender people are sheltered and supported by their mentors who take care of them and stand by them in times of crises.

The spirit behind the change

"They are people, same as we are, and they are worthy of being in this society and living a normal life like us. I hope with the help of this school, they would be able to make a living and be accepted in Pakistan," said Eeman Khan, a non-transgender teacher of English language and computer education at the school.

Khan said that she accepted the teaching job because she wanted to create awareness among Pakistanis that everyone is equal — including transgender people. One of the main hurdles to change is the widely entrenched mindset (even among transgender people) that they are different.

"As a teacher I will try my best to empower my community because when they receive proper education and training, it will help them secure jobs and make ends meet," Abbasi told DW.

Harboring hopes of a better life

Unlike Pakistan's religious minority groups and the disabled, transgender people do not benefit from job quotas, and rarely get accepted for jobs in national organizations. "I joined this school to make a name for myself in Pakistan. I want to be independent and work; if we are independent and contribute to the country then people will accept us," Moon, a student at the school, told DW.

Another student, Arham, told DW that he wants to become a makeup artist, open a salon and provide opportunities to his community. "They can work in my parlor rather than beg on the roads and be a source of entertainment for others."

"Only my parents accept me as a human being but people like my cousins, sometimes even my brother, ridicule me. I am really hopeful that this step toward educating our community will help us integrate into society and we will be accepted as human beings," Arham said.