A group of Islamic clerics in Pakistan have ruled that third-gender individuals - known as hijra - can marry and be buried with Muslims. The community is generally shunned and lives on the fringes of society. 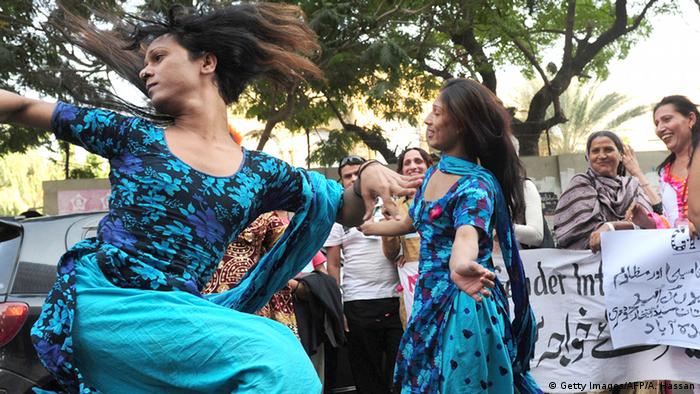 The little known Lahore-based clerical group Tanzeem Ittehade-i-Ummat, or Organization for the Unity of Muslims, issued the fatwa - or religious opinion - which also said that hijras should not be harassed.

"The hijras are human beings and they have rights given by Islam," said Muhammad Zia ul Haq Naqshbandi, the clerical head. "Through this fatwa, we want to inform the public that they can marry," he said.

The fatwa is not legally binding but meant to guide Muslims and Islamic jurisprudence.

There are an estimated 200,000 hijras in Pakistan, a deeply conservative society where hijra often end up as prostitutes, beggars and street dancers. Gay marriage is illegal and sodomy can be punished, but the Pakistan Supreme Court has previously ruled transgender people have the right to inheritance.

The new fatwa advised that third gender individuals having male attributes could marry women and those who were physically women could marry men.

"[...] Normal men and women can marry such transgender people as have clear indications on their body," the document said. However, those with the "physical signs" of a woman and man may not marry, it added.

But Tahir Ashrafi, chairman of the Pakistan Ulema Council, said clerics should be careful while issuing a religious decree about transgenders. "It is a complex issue. In my opinion, a transgender person with male attributes can marry a transgender with female indications on her body," Ashrafi told DW.

The Tanzeem Ittehade-i-Ummat was established two years ago to foster harmony among Muslims. The most influential clerical body in the country of 190 million is, however, the Council of Islamic Ideology, which has not issued a ruling on the rights of hijra individuals.

The document also advised against harassing or mistreating hijras.

"Making noises at transgender people, making fun of them, teasing them, or thinking of them as inferior is against sharia law, because such an act amounts to objecting to one of Allah's creations, which is not correct," it added.

According to Pakistani senator Taj Haider, the transgender people have been mistreated in the Indian subcontinent for centuries. "But the mindset is now changing. The government must make sure that these people receive proper education. That will help them integrate into society and elevate their social status," Haider told DW.

But Almas Bobi, a transgender activist, believes the fatwa allowing third gender individuals to get married won't change anything. "Marriage is not our foremost concern; we need education, health facilities and employment. Our economic status is so low that we have to beg on the streets," Bobi told DW.

Pentagon to repeal ban on transgender service members in July

The Pentagon plans to repeal a ban on transgender service members. This comes five years after ending the US military's ban on gays and puts to rest a long and complicated debate over the last year. (25.06.2016)

As the world mourns the victims of the Orlando attack, members of the LGTB community in many African countries are facing increasing persecution, with anti-gay laws tightening around the continent. (17.06.2016)