Erik Spiekermann, one of Germany's most respected designers, has been openly critical of the design concept for the 2006 World Cup, from the mascot to the logo. He told DW-WORLD.DE why it hasn't been successful. 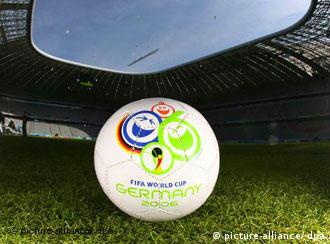 The logo contains too much info and is badly presented, Spiekermann says 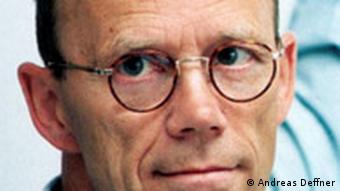 Erik Spiekermann is one of Germany's best-known typographers and designers. He was one of the founders of MetaDesign, one of Germany's leading studios for corporate design and branding, whose clients have included Apple Computer, Audi, VW, IBM and Nike. He has designed the passenger information systems for the German railway system and helped redesign The Economist magazine. He is an honorary professor at the College of Art in Bremen and is a former president of the International Institute for Information Design. He had no role in the design for the 2006 World Cup.

DW-WORLD.DE: You've been very critical of the mascot of the World Cup, Goleo. Why?

Erik Spiekermann: Not only the mascot, but the whole business. I mean the mascot itself is a typical effort by too many parties. It's a lion, which has no historical relevance to Germany whatsoever. We have eagles, gnomes and garden dwarves and what have you, but we don't have lions. That's English or French. The mascot is called Goleo, "gol" as in the Spanish for the English word "goal," and "leo" as in Italian, Latin, Spanish for lion. So it's obviously trying to appeal to a world audience, which is kind of nice, but it's a little patronizing. Why not be in Germany and call it "Fritz" or whatever? We are German, so we might as well own up to it. This artificial lion is neither cute nor ugly nor relevant; it's just embarrassing.

Is this a case of too many cooks in the design kitchen? 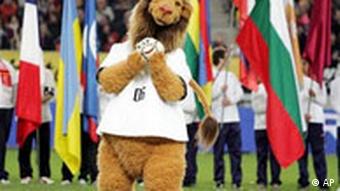 Goleo IV, the official -- and much ridiculed -- mascot of the World Cup

When I first saw both the lion and the logo, the whole design concept for the World Cup in Germany, I thought oh my God, those poor designers. I've been there, dealt with these kinds of clients. I actually have met some of the designers who perpetrated this design and know that they were at a disadvantage from the outset. Everybody wants to own a design for an event as big as this, from the CEO to his wife to a whole chain of people going down. And there are way too many committees and meetings where changes are required by people who don't know what they're doing. In the end, after all the input, the common denominator in this case turned out to be very, very low. I wouldn't employ any of the guys behind this design.

Why don't you think the whole concept works, especially regarding the logo?

First, there are too many messages. The original brief was: we've got to fit Germany in there, then 2006, then FIFA, plus we've got to have some happy people in there, we need green for the lawn, we've got the German national colors. So there's green and black and red and yellow and happy faces and FIFA, just way too many messages. You can look at this and count the elements and it just flies in the face of effective communication.

Has Germany done better in the past? 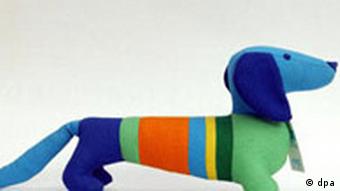 "Waldi" was the mascot for the 1972 Olympics in Munich

Yes. There was one obvious example: the 1972 Olympics. That was very much the other end of German design. It was designed by a group around Otl Aicher, one of the founders of the old school, very much in the Bauhaus, Germanic, Protestant tradition. It was very strict but they managed to bring in pastel, light colors that made the design look German in that it was clean and tidy, but it was also fun, bright and cheerful.

Even their mascot was a little dachshund, which is about as German as they come. It was designed over a couple of years by the best of the crop here, but these guys in Munich who designed for the World Cup this year got picked because they knew somebody high up in the German football association and FIFA. It gives us a bad reputation here.

Why do you think the World Cup designers avoided appearing too "German"?

Part of it is that we have this incredible cross to bear. You can't be proud to be German because we have such a bad history, at least my generation can't, and I was born in '47. The clients for this particular job are of my generation or older, so I think they were trying to give the world everything in one package while being cheerful about it. It's like designing a joke, and you can't design a joke. I think the original design assignment must have been all over the place. With all the things that had to be avoided and then all the things they wanted included, it was impossible to come up with something good. Unless, of course, you were a designer with a strong personality who would basically tell those guys giving the orders to get lost, which the designers in this case didn't. They just took their money and ran.

The World Cup is about the game of soccer first and foremost. Why is design important at all?

It has a straightforward function, it tells you where to go, directs you to your goal, the screens, the stadiums, lots of things. It tells people: 'This message pertains to the World Cup.' It's very much like any location or event design: you have to make your presence known to people. Once they are in the system, design tells them whether they are on their right path and indicates what is about to happen to them. Design has a functional role, but it also creates a mood. It has both important functional and psychological roles.

So what kind of message does the current design communicate? 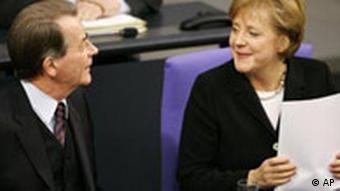 Is the design a mirror of Germany's grand coaltion that's led by Franz Müntefering and Angela Merkel?

It is communicating that the people who designed it and who briefed it have no confidence in their abilities and that they are trying to please everybody at the same time. They are over-organized; there are too many messages; and nobody wants to take on responsibility. In fact, it is a perfect mirror of German society right now. It is very much akin to the governing grand coalition -- two big parties that are basically canceling each other out because no one can make any decisions. Everyone is trying to be nice, everyone knows we have to do something, change society, change behavior, and economy, but no one wants to take the first step because we're so comfortable. We're still wrapped up in our nice security blanket. We know it's cold outside, but we just stay inside and huddle. This sort of World Cup design is very much communal huddling -- trying to please everyone but never even putting a finger outside of that security blanket.

Avoiding controversy at all costs? 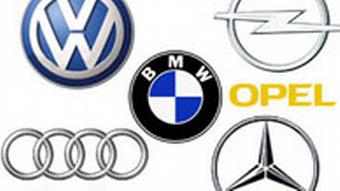 Not liked by everyone

Exactly. What happens in the end is that it becomes incredibly bland. German design is known, and it is known for being German. You buy a Porsche or a BMW or an Audi because it's German, not in spite of the fact that it's German. And not everybody likes it. It has an edge; it's not patronizing. The same goes for graphic design, we have a great history of design. But for some reason, it has just has not moved onto this soccer scene. It's a shame because when people come in from the outside world they think this is how German designers are and for me, it's personally embarrassing. I want to go away and hide and pretend I'm a brain surgeon or something.

What would you say to the designers behind the World Cup project?

Don't give up your day job.

A Mascot for All Seasons?

Goleo the Lion was revealed as the official mascot for the 2006 World Cup this weekend. While fame and fortune beckons for the face of the soccer spectacular, Goleo will find out it's not all furry handshakes and waving. (Nov. 16, 2004)

It's been said that soccer is more than just a sport. It's about passion, excitement and participation. It's also about going a bit crazy. Here DW-WORLD.DE offers five of the most bizarre aspects of the 2006 World Cup. (June 9, 2006)

A new scandal is rocking the FIFA World Cup. Goleo VI, the official championship mascot, is turning out to be a flop. Perhaps he will have to become a male stripper after all. (June 2, 2006)