A new scandal is rocking the FIFA World Cup. Goleo VI, the official championship mascot, is turning out to be a flop. Perhaps he will have to become a male stripper after all. 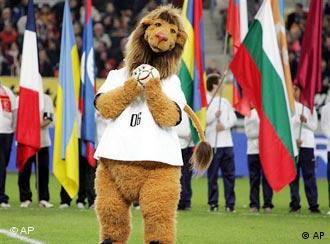 Dude, where are your pants?

German toy maker Nici said on Monday it was facing financial ruin because of the disappointing sales of the official World Cup mascot, Goleo VI.

Somebody should have seen it coming. We live in a superficial age, in which Joan Collins and Linda Evans, who recently got together for a Dynasty reunion, look exactly the same as they did 20 years ago at the peak of the international shoulder-pad mania. Good looks are important. Good looks will get you anywhere.

Goleo, on the other hand, is not exactly what you'd call an attractive fellow. He could easily pass for an out-of-wedlock child of mumbling Star Wars monster Chewbacca and US 1980s sitcom teddy-bear starlet Alf. And now, it turns out, nobody wants to hold him, hug him, and call him George.

The fine gentlemen of FIFA probably couldn't care less. For all their declared love of sport and international understanding -- which sometimes makes them sound as if they were running a charity founded by Mother Theresa and not an international money-making machine with a surplus of 138 million euros ($178 million) in 2005 alone -- FIFA officials were clever enough to diversify into the obsessive-compulsive world of computer games. Teddy bears are so 20th century. But the German company that licensed the European rights to Goleo filed for bankruptcy on Tuesday. 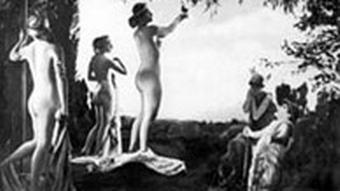 Nudism has by now become an integral part of German culture

Goleo VI will go down in history as a failed attempt at creating a market for teddy-bear erotica. Why would he otherwise be wearing a T-shirt but stay stark naked down below?

Admittedly, Germany is known -- especially to those who grew up with the puritan tradition of Anglo-Saxon emotional dysfunction which treats the naked body as a proven source of evil -- as a weird place where hippies prance around naked in parks and on TV. Maybe Goleo was simply trying to spread the liberating, nudist message: Kick back, get naked and relax!

According to the official Goleo biography on the FIFA Web site, Goleo was cast from a talented group of wannabe-superstars -- ranging from a giant Berlin currywurst sausage to a mammoth Bavarian pretzel. It should have been obvious form the start, however, that Mr. No-Pants was a troubled individual. 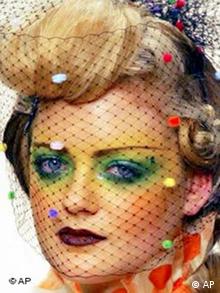 According to FIFA, Goleo was born in Botswana in 1985. He experienced serious trauma as a child when he was discovered by poachers who caught him with a net. He was freed later on but, to this day, he is petrified by all sorts of nets and -- above all -- fishnet stockings.

Fishnet stockings? Hello, FIFA! Anybody home? Everybody knows that the oldest trade in the world is legal in Germany and that sex worker ladies often expose their skyscraper legs only dimly veiled by fishnets. Goleo would only need to take a walk down Oranienburger Strasse in Berlin late at night and he'd have a nervous breakdown. Exposing him to his worst nightmares is simply mean.

And what exactly can Goleo do other than constantly kick his talking ball sidekick Pille in the face?

"Anything you need him to," says the FIFA Web site. "(He can) play the drums, draw figures without trousers, laze around and relax. If he's in a really good mood, Goleo VI also likes to sing, much to Pille's disgust, as he finds the racket truly appalling."

Now one shouldn't be too nitpicky, but Goleo really sounds like a weird combination of a male whore (he'll do anything you want him to), a cartoon pornographer (he draws figures without trousers) and sidekick-molester (he makes his best friend feel disgusted). Admittedly Goleo's sidekick is a scary creature in his own right, but how much abuse does a talking ball have to take these days -- even from a best friend?

There are still kind people in this world who realized that the last thing Goleo needed was to become a superstar à la Robbie Williams. So they decided not to spend money on him. He really has two options now: rehab or professional striptease. Hopefully he will make the right decision.

Could Goleo's Musical Career Spell the End For Pille?

He first appeared without a voice...or trousers...but now, as his career takes another stratospheric upswing, Goleo releases a solo hit single. But what will happen to Pille now the World Cup lion has found his roar? (Feb. 9, 2006)

Hallelujah! It's Raining Knickers in Hamburg

What inspires Karl-Günther Petters, pastor of St. Jacob's church in the northern German city of Hamburg, to buy ladies' underwear? It's not a matter of personal taste or secret passion. It is a sense of charity. (March 20, 2006)