Tired of coronavirus lockdown, Japanese turn to horror for the chills | Asia | An in-depth look at news from across the continent | DW | 25.08.2020

Tired of coronavirus lockdown, Japanese turn to horror for the chills

Innovative Japanese firms are providing bored and frustrated city-dwellers with a place to have fun — but also stay safe — as the coronavirus crisis rumbles on. Julian Ryall reports from Tokyo. 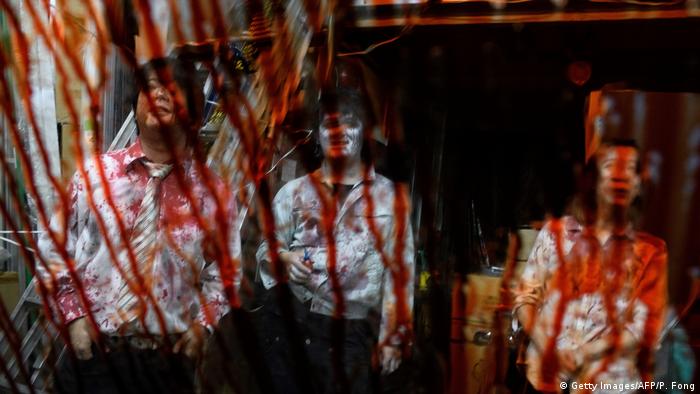 More than 100 people in Tokyo this weekend paid for the privilege to be shoved into coffins and the lid slammed shut, before watching on through a clear window as they were menaced by zombies wielding chainsaws and water guns.

Part theatrical performance, part opportunity to blow off steam as soaring temperatures across Japan see residents increasingly frustrated at not being able to enjoy summer due to the coronavirus pandemic — the innovative horror experience is the brainchild of Kenta Iwana, the founder of "Kowagarasetai," which translates to "The Scare Squad."

"People have not been able to do what they would usually do in their summer holidays and they are frustrated and bored," 25-year-old Iwana told DW.

"They are desperate to do something and to be entertained, but they can't because theme parks are closed and they cannot travel overseas. At the same time they want excitement. However, we all know that it is important that we are all safe from the coronavirus, so this is what we came up with," he said.

The event took place in a lounge at the long-distance bus terminal in Tokyo's Shinjuku district, which is presently nearly completely empty of passengers as people stay at home. Iwana and his three-strong team fitted the room out with coffins, got into their costumes — and characters — turned the lights out and welcomed their first guests.

Step into the coffin

"People were led into the room and were helped into the coffin, which was then closed so they could hardly move," Iwana said. "All they could do was to watch through the window, and scream, of course."

As well as being threatened by zombies and other horrific apparitions, customers were exposed to haunting voices and disembodied hands attempting to open the coffin lid. Each performance lasted for 15 minutes and cost 800 yen (€6.40, $7.58).

"Most of the people who came were in their teens or twenties, but we had a couple of families as well," Iwana said. "But we didn't get any old people," he added.

Still, the event was a hit with customers, with one message on Twitter detailing her "screaming coffin" experience as "so powerful that it was like a four-dimensional horror movie! It was the coolest thing this summer."

Another added: "It turned out that being locked in a coffin was scarier than I had expected and I think it would have been dangerous for me if it had continued for much longer. But I still laughed and screamed a lot — and I got splashed with water more than I expected."

The coffin event is the latest in the Kowagarasetai repertoire, a result after Iwana's first such project proved so popular.

Drive-in movie theaters are making a comeback in spring because people are nervous about going to a cinema during the pandemic. Iwana, thus, wants to create Japan's first drive-in haunted house.

Founded in 2018, his company had previously focused on operating haunted houses for parties and events, but Iwana sensed the opportunity.

Here's how the experience unfolds: Customers pull up at a nondescript parking garage in Tokyo and are guided inside. Once the lights go down, the horror begins, with a team of seven zombies and other ghastly characters attempting to get into the vehicle, dripping blood across the paintwork.

And as all the windows remain firmly closed throughout, everyone remains safe from the virus, Iwana said. The experience costs 8,000 yen, but clients can also hire a care for an additional 9,000 yen. And at the end of the performance, the zombies promise to wash all the fake blood and gore off the vehicle.

"We have a tradition of ghosts and telling horror stories in the summer months in Japan, so this fits neatly with that, but I think the primary motivation for anyone who is taking part in something like this is simply boredom with our daily lives today because of coronavirus," Makoto Watanabe, an associate professor of media and communications at Hokkaido's Bunkyo University, told DW.

Read more: Coronavirus: Is working from home becoming the new normal in Japan?

The Obon holidays in mid-August are traditionally the time when Buddhist families honor the spirits of their ancestors, with many people visiting graveyards to pay their respects. In addition, ghost tales became popular in the traditional form of "kabuki" theater in the summer months. The stories are relatively straightforward and could be played by less experienced actors, enabling the more accomplished performers to rest during the hottest part of the year.

"People are looking to escape," said Watanabe. "They have been teleworking from home, and they can't go out to eat or drink with their friends because of the lockdown. Everyone is worried about their jobs and no-one is going abroad on holiday this year, so there really is not a lot to look forward to."

"So people want to be entertained. They want to be stimulated and excited. And that's pretty normal. Although being frightened might not seem fun to everyone, of course," said Watanabe, adding that other companies have come up with similar escapist ideas. This includes a travel company that sells seats on a passenger jet complete with a 90-minute flight above Tokyo, before returning to the same place where it took off — an experience that gives passengers the illusion that they have been on a journey.

Delighted with his success, Iwana is already planning his next performance, although won't let too many details slip just yet.

Read more: Coronavirus: Will Japan be ready to host delayed Olympics next year?