Thousands stranded in Greece after Macedonia opens border for 250 migrants

The UNHCR has warned of a "looming humanitarian crisis" due to Macedonia's decision to stem migration. Around 25,000 migrants are stranded in Greece after several European nations decided to block passage to refugees. 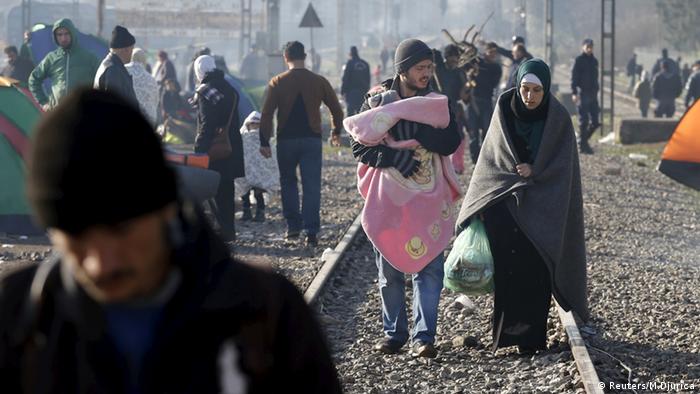 Macedonian authorities on Wednesday allowed some 250 asylum seekers from Syria and Iraq to cross its border with Greece at the Idomeni crossing, Greek officials said.

As tensions at the Macedonian border reduce the refugee flow to a trickle, five camps in northern Greece are struggling to accommodate around 16,000 people. Diego Cupolo reports from Thessaloniki.

As the UNHCR warns of an impending disaster in Greece, those on the ground dealing with the crisis day-in-day-out feel it’s unfolding already. Omaira Gill reports from Athens. (02.03.2016)

The European Commission has proposed giving EU member states millions in aid to cope with many thousands of migrants. Greece will be among the major recipients of assistance amid the current migrant influx. (02.03.2016)

Migrants have no right to choose the country in which they claim asylum, German Chancellor Angela Merkel said after meeting the Croatian PM. The chancellor once again called for a joint solution to the refugee crisis. (01.03.2016)

The Kurds of Idomeni

Following Monday’s Macedonian police action against attempts by refugees to force open the Macedonian gate to Europe, life seems to be getting back to normal – sort of. Marianna Karakoulaki reports from Idomeni. (01.03.2016)

Thousands of migrants, many fleeing war in the Middle East, Asia and Africa, have been stranded in Idomeni by Macedonia's decision to allow passage to only a handful of asylum seekers with identification papers from Syria and Iraq.

Wednesday marked the first time in two days that refugees were allowed to cross the frontier following an incident in which Macedonian police fired tear gas at protesting migrants attempting to force their way through the border fence.

Macedonian authorities have defended their stance.

"Our daily admittance of migrants will depend on how many will be accepted in EU countries," said Interior Minister Oliver Spasovski. "It is very important to secure humane treatment and admit these people, but it's no less important that we protect the Macedonian citizens and police."

UNHCR spokeswoman Melissa Flemming said on Wednesday that the decision taken by Macedonia and other European countries to limit the migration flow has resulted in some 25,000 people stranded in Greece.

Fleming warned of a "looming humanitarian crisis" as around 1,800 people reach Greece daily from Turkey by undertaking a perilous journey across the Aegean Sea.

'Europe will be there to assist them'

Skopje's latest move to allow a handful of migrants continue their way towards Germany, Sweden and other richer EU nations comes as European Council President Donald Tusk called for the restoration of the Schengen passport-free travel zone.

"There is no doubt we need to restore Schengen," he said. "It will cost money, take time and require a huge political effort. There will be countries that may not be able to cope with this challenge.

"But Europe will be there to assist them. We need to invest in Schengen, not in its collapse," Tusk said, adding that it will be one of the issues at a March 7 meeting of European leaders with Turkish officials.

Tusk also said Europe's priorities should be stemming the flow of migration and helping Greece and Macedonia cope with the thousands of migrants there.

He added that EU member states should "refuse entry to third-country nationals who do not meet the necessary conditions or who, although they were able to do so earlier, did not apply for asylum."