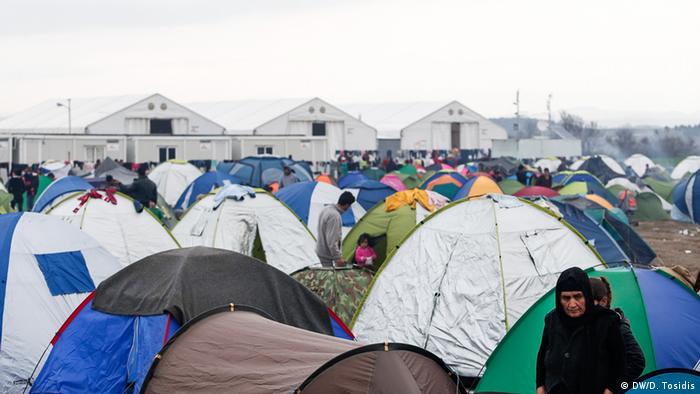 The EU has always emerged from past crises stronger. Once the pressure is high enough, that's when the EU manages to find a compromise at the 11th hour.

This standard operating method is now being put to the test in the most cynical manner. By stopping refugees and migrants mainly along the border between Greece and Macedonia, Austria and the Balkan states are putting enormous pressure on Greece to take action.

At the same time, the terrible images of desperate refugees enveloped in tear gas are meant to force EU heads of state into agreeing on some fairer form of distributing the refugees. German Chancellor Angela Merkel continues to call for a "European solution." By March 7, when the next summit is set to take place, the humanitarian crisis in Greece needs to be so bad, that leaders can no longer put off finding a solution.

The Austrian government hopes that the horrible images will have a deterrent effect on any more potential refugees still in Syria, Iraq and Afghanistan. But what many politicians seem to be repressing, or forgetting, is that real people are suffering right now at Greece's borders, in Athens, in the port of Piraeus. Instead, they've turned these people into pawns on the EU's political chessboard. It's a cynical game that has to stop.

We cannot simply unload the problem on Greece, and as Angela Merkel said in her appearance on a Sunday evening talk show, we cannot abandon Greece. But that's exactly what is happening. And the chancellor, who is increasingly isolated within Europe, has no alternative to offer. Austria's defense minister recommended that Merkel transport the refugees from Greece directly to Munich. He made no bones about the fact that he's willing to use people's misery for political blackmail. It is, in a word, repulsive.

What exactly is supposed to happen in Greece? Should we stand by as it implodes? The fuse is already burning. For his part, Greek Prime Minister Alexis Tsipras is threatening to block EU decisions instead of finally, after months of self-pity, getting on with creating enough emergency shelters for the migrants. Brussels released the funds for this last summer; Greece just has to make it happen. And now in the current crisis, the Greek government is proving a no-show, relying on private aid organizations and the willingness of the Greek people to help.

Central European countries also needn't point the finger at Greece. Refugees and migrants have been living in inhumane conditions for 15 years in Calais, and more recently in Dunkirk. To this day, France and Britain (the country to which most of these migrants wish to travel) have found no better solution than to build stronger fences and tear down the migrant camps every few years. In terms of size, Calais is of course much smaller than the current drama in Greece, but it is nonetheless a shameful reminder of Europe's misguided asylum policy.

Humanity getting lost along the way

We can't wait for the increasingly incapacitated EU to hold another inconclusive summit. People need help right now. Do they have to start dying for these cynical tactics to finally stop?

We won't be able to keep the refugees bottled up in Greece with these border closures for long. They'll find new ways into Bulgaria, Albania, Egypt, Libya, and Italy.

The hope that Turkey will do our work for us and stop people from fleeing to Greece is deceptive. Without a European offer to accept refugees from Turkey directly, Ankara has absolutely no incentive to play the part of Europe's chief border guard.

We have to stop conducting politics on the backs of refugees and immigrants, whether it's in Greece, Macedonia, France, or anywhere else in Europe. The United Nations' High Commissioner for Refugees has accused the EU of provoking a humanitarian disaster in Greece that is largely of its own making. There's not much more to say.

State officials can direct refugees to live in certain places, the European Court of Justice has ruled. Judges ruled in a case involving two Syrians in Germany who claimed they had the right to move freely within the EU. (01.03.2016)

Tensions are rising in Idomeni with more than 7,000 refugees - mainly from Syria and Iraq - trapped between Greece and Macedonia. When refugees hurled stones and broke a fence, police fired tear gas. (29.02.2016)