Ukrainian protesters have accused President Volodymyr Zelenskiy of surrendering to Russia with his plan for local elections in the pro-Russian separatist east. The region has faced five years of violent conflict. 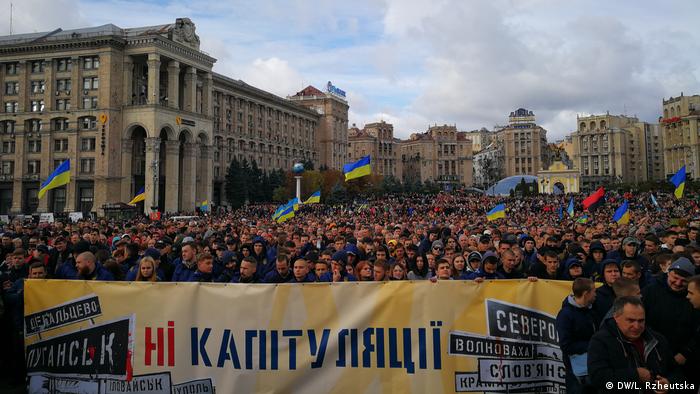 Thousands of protesters rallied in the capital of Ukraine on Sunday to protest President Volodymyr Zelenskiy's plan to allow local elections to take place in the separatist east.

Zelenskiy said the step was needed to revive stalled peace talks on the contested region, which has been plagued by five years of violent conflict between pro-Russian separatists and Ukrainian government troops. But protesters slammed the president's plan as a concession to Russia.

On Tuesday, Ukraine, Russia and the pro-Russian fighters had signed an agreement paving the way for local elections. France and Germany, which have been involved in peace talks, welcomed the move. They hope it will allow the stalled talks to resume in the near future.

Around 10,000 people, including veterans of the fighting in the eastern region, marched in downtown Kyiv on Sunday. They gathered on the Maidan, the city's main square and the focal point of the 2014 anti-Russian influence and pro-democracy movement. Protesters in Kyiv hold up signs reading 'No surrender'

Many carried signs reading "No to surrender!" and criticizing Zelenskiy.

The president was elected in April on a platform of ending corruption and resolving the ongoing fighting in the east. He has expressed support for continuing sanctions against Russia while also engaging with Russian President Vladimir Putin to try to secure a lasting peace in the contested territory.

Zelenskiy defended his plan for the elections, stating that the poll would follow Ukrainian law and feature candidates from Ukrainian political parties. He said the vote should be preceded by a ceasefire and a total prisoner exchange between Ukraine and Russia.

A plan named after a German politician

Allowing elections in the eastern region is one component of a road map to peace that Moscow said was necessary in order to resume peace talks. The plan has been nicknamed the "Steinmeier formula" after German President Frank-Walter Steinmeier, who previously served as foreign minister and helped propose the plan.

A peace deal brokered by France and Germany in Minsk, Belarus, in 2015, has proven unable to end the violent fighting that has claimed some 13,000 lives. The plan outlines broad autonomy for the region, as well as amnesty for the pro-Russian rebels. It was signed by Zelenskiy's predecessor, Petro Poroshenko, who was among the protesters on Sunday.

Zelenskiy is preparing to meet Putin in a high-stakes summit to discuss the conflict in the east.

After lengthy negotiations, Russia and Ukraine carried out a major prisoner exchange. While Ukraine saw prominent filmmaker Oleg Sentsov and others freed, Russia benefited most from the swap. (08.09.2019)

Sunday's parliamentary vote in Ukraine will mark a turning point for the country. The legislature may gain many new young faces — or see pro-Russia elements receive a boost in support. (21.07.2019)