Thousands of plastic eggs wash up on German beach

A small island in Germany has woken up to quite a surprise after Storm Axel knocked shipping containers off a passing freighter. The mayor of Langeoog has bemoaned the tons of plastic bags that washed up with the toys. 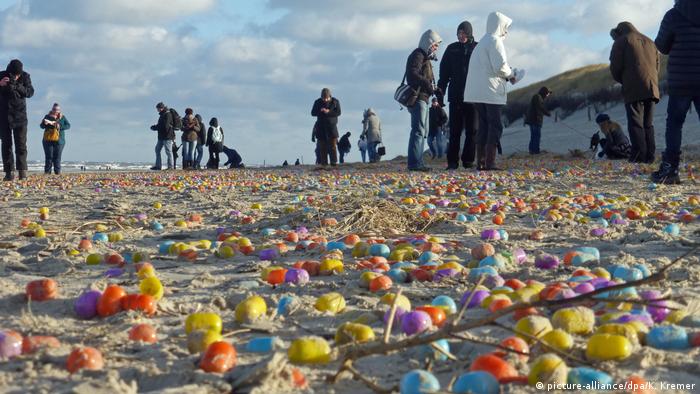 As Storm Axel struck the northern coast of Germany on Wednesday night, causing widespread flooding and property damage, it also brought a pleasant surprise for the children on the island of Langeoog. Tens of thousands of plastic eggs with toys inside, known in Germany as "Überraschungs-Eier" or surprise eggs, washed up on the island near the Dutch border.

According to local media, a freighter belonging to the Danish firm Reederei Maersk lost several of its containers as it was tossed about in the storm, including one filled with plastic eggs containing small toy animals.

Uwe Garrels, the mayor of the small community of less than 1,000, quickly made the decision to allow local kindergarteners to gather as many of the eggs as they wanted. "The surprise eggs have found their way to freedom," Garrels was quoted by broadcaster NDR as saying, adding that he thought this made them duty-free. 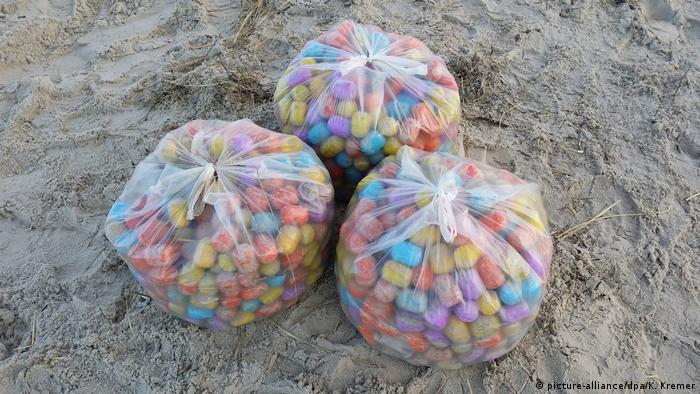 Bags of collected eggs ready to be picked up

Garrels said that if any foreign companies or institutions saw this as thievery, they were welcome to come collect the thousands of small plastic objects obstructing his once-pristine beach.

The mayor cautioned, too, that the clean-up would not be all fun and games. Besides the toys, there were also "untold amounts of plastic bags and other packaging materials" washing up on shore.

On Thursday, Langeoogers were already pulling together to organize a beach clean-up campaign.

The Netherlands and Germany have long disagreed about where exactly their shared nautical border lies in the North Sea. A meeting of the two nations' foreign ministers finally put an end to the dispute. (24.10.2014)

The seven East Frisian islands stretch in an arc off Germany's North Sea coast. Slow tourism is the watchword here. We explore two of the islands: Langeoog and Spiekeroog. (09.07.2014)