The northeastern coast has been hit by the worst storm it's seen since 2006. Emergency workers scrambled to protect the region's citizens and many historical sites.

Germany's northeastern coast was struck over Wednesday night and into Thursday morning by the worst flooding the region has seen in over ten years. As the water in the Baltic Sea rose to about 1.7 meters (5.5 feet) above its usual level, coastal cities like Lübeck, Rostock, Kiel and Flensburg became impassable.

In Flensburg and Lübeck, the flooding became so severe that parked cars began drifting down the street, and it threatened parts of Lübeck's World Heritage-listed medieval downtown, which had to be protected with walls of sand bags.

"We can't comment yet on the extent of the damage," said a police spokesman. He added, however, that the city's famous Gothic citadel, the Holsten Gate, had been spared by Mother Nature. 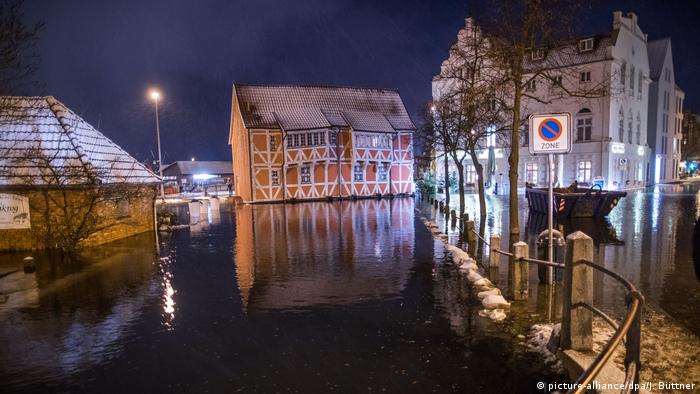 Bad storms can cause even worse damage to Germany's medieval heritage sites. Wismar in Mecklenburg-Western Pomerania was among those affected

At beach resorts like on the popular island of Usedom, waterside promenades, stairwells, and food stalls were pulled out to sea. A spokesman for the region said it was "worse than expected."

Overnight, Germany was hit by severe winds and extremely icy conditions as a result of the event, which the weather service has named Storm Axel. Wind speeds of over 123 kilometers per hour (76 mph) and temperatures as low as minus 20 degrees Celsius (-4 Fahrenheit) caused numerous traffic accidents and instances of property damage throughout Wednesday night.

Although stormy weather, as well as snow and sleet, were expected to continue in Germany on Thursday, Storm Axel was predicted to sweep eastward across the Baltic to Belarus.

The eroding future of a German island

At the end of 2015 a storm flood wiped out a large section of beach and flattened meter-high dunes on Germany's North Sea island of Sylt, sparking fears that its entire southern tip could disappear. (25.08.2016)

A lightning strike has left over 50 people injured at a rock music festival in Germany. Deadly weather has swept across Europe, leaving over a dozen dead in Germany, Romania, Belgium and France. (04.06.2016)