As cleanup begins after massive flash flooding in Germany, many are left wondering why a predictable natural phenomenon causes so much damage nearly every year? 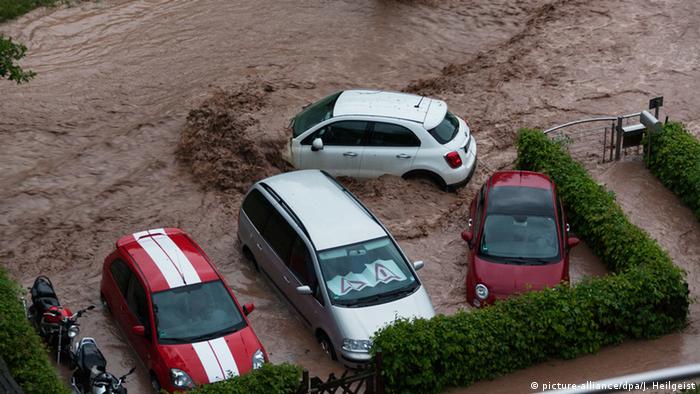 How does flooding happen?

Fresh-water floods usually come in one of two forms. The first is a flash flood, meaning a bout of high-density rainfall over a relatively small area. The localized downpour results in a complete, systemic overflow at various locations simultaneously. Towns and cities in southern Germany registered flash floods Sunday (26.05.2016), particularly a town of 60,000 called Braunsbach, featured here in the video.

The second kind of flood involves a river flowing over its banks.

"High river waters always appears at really large scales," says Andreas Krohn of the Karlsruhe Institute for Technology's Hydromechanics institute. "So not just in small areas of southern Germany, but in Central Europe, for example - when precipitation falls over many days, leading to the water masses growing in the rivers, and the rivers bursting their banks."

This is the type of flood that affected northeastern Germany in 2013, when the Elbe partially burst its banks.

Have humans made flooding worse?

Europe's full of streams, creeks, brooks and rivers whose natural, slow-rising banks are gone, replaced by vertical walls of stone or concrete or v-shaped earthen dikes. In the last 500 years, the Rhine, for example, has been shortened by 50 miles (80 kilometers), has had stretches of its waters shifted nearly a mile to the east, has seen numerous overflow reservoirs filled in and reclaimed, and has had its embankments built in order to speed the waters up. Sound like good flood planning?

"Flood zones have been severed from the river," Krohn says. "In that respect, humankind has concretely worsened the drainage for rivers."

But the biggest influence people have had is to live too close to sources of water.

"The negligence of human beings is that they've simply built on flood zones, in areas that naturally, regularly, annually - or semi-annually - flood, and where nothing was previously built by people before.

Can we make rivers safer?

We can undo the things we've done to rivers - by removing dams, dikes and embankments and giving the river more floodlands for that once-in-a-century storm.

"That's the path that's being taken with many rivers today," Krohn says, "You try to make more surface area available and to give the diked in river some more space."

And ignoring the environmental concerns, what about digging the rivers deeper so they could just hold more water?

"Such measures can only work at the very local level," Krohn says. "You can protect a city by building a wall that's a meter high. That would be a possibility, but it'd be a local one."

Such measures, Krohn adds, would not help countries, like India or Pakistan, which annually suffer months-long monsoons over enormous expanses of land.

"There are more or less no ways to prevent that," he says. "One opportunity is to make the people who live in those areas aware that they live in a risk zone - to have relevant warning systems so that people can save their own lives first, but also their belongings. "

As for those living in southern Germany, could they have done something to have better prevented the floods?

"Honestly, nothing," Krohn says. "In Baden-Württemburg, as much rain fell in 24 hours as usually falls in a month … There's no way to avoid that through precautions. It's a natural process that people can't influence."

Dozens of people, many of them children, have been injured in lightning strikes in Paris and a small town in western Germany. One man was killed by lightning in Poland and several were injured. (28.05.2016)

Fresh landslides in Sri Lanka have been reported as rescue workers try to reach residents in the capital stranded by floods. Poor weather conditions have hindered rescue operations, with hundreds still missing. (21.05.2016)