The Netherlands and Germany have long disagreed about where exactly their shared nautical border lies in the North Sea. A meeting of the two nations' foreign ministers finally put an end to the dispute. 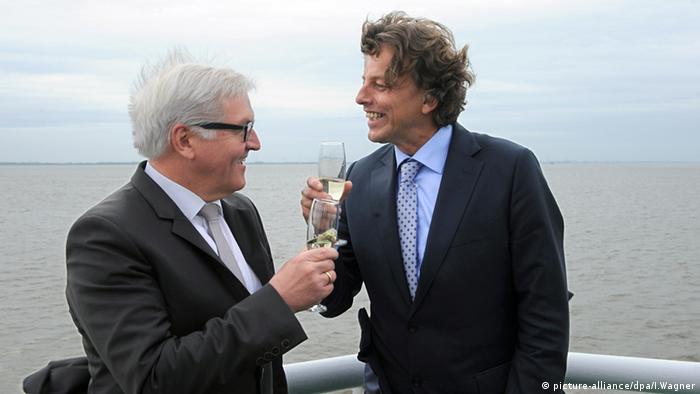 A border dispute is not an issue usually associated within the cut-and-dry framework of the European Union. Yet that's just what Germany and its neighbor, the Netherlands, finally laid to rest on Friday after centuries of discord over the between German East Frisia and Dutch West Frisia, according to German news agency dpa.

German Foreign Minister Frank-Walter Steinmeier (above left) and his Dutch counterpart, Bert Koenders (right), met at the border between the German town of Emden and Delfzijl in the Netherlands, where the Ems River empties into the disputed Dollart Bay. The ministers signed an agreement that the border will remain ambiguous and both nations will share responsibility for the area.

"If only every conflict could be solved so easily," said Steinmeier, after he and Koenders signed the document, symbolically astride the deck of a ship, floating between both nations.

The agreement has important economic implications, as it has long been the site of contention between German and Dutch fisherman, as well as the 450 million euro- ($570 million) Borkum Riffgat offshore wind farm, run by the German EWE energy company to the ire of Dutch protesters.

On the Dutch side, in Delfzijl, a coal power plant has been built which the German East Frisians say will pollute the river and the bay and hurt tourism - something they depend on. The government of Lower Saxony, the state to which East Frisia belongs, called it an "unfriendly act" on the part of the Dutch.

The document signed by Steinmeier and Koenders put these issues to rest, at least diplomatically, and the German wind farm no long stands on shaky ground in terms of international law. The responsibilities of both nations are now clearly defined.

Steinmeier called the agreement "a good result for the economy, for new wind farms and maritime interests."

German Foreign Minister Frank-Walter Steinmeier has rejected calls for German troops on the ground in Syria. He was speaking in the Saudi city of Jeddah, where he is meeting the crown prince and the foreign minister. (13.10.2014)

German Foreign Minister Frank-Walter Steinmeier has tentatively suggested to the OSCE that France and Germany could provide unarmed drones to monitor Ukraine's border with Russia, after talks with his Kyiv counterpart. (10.10.2014)