Several thousand people turned out in Dresden to pay respects to stabbed asylum seeker Khaled I. The explanation behind the Eritrean's death remains unclear, with many criticizing the response by the city's police. 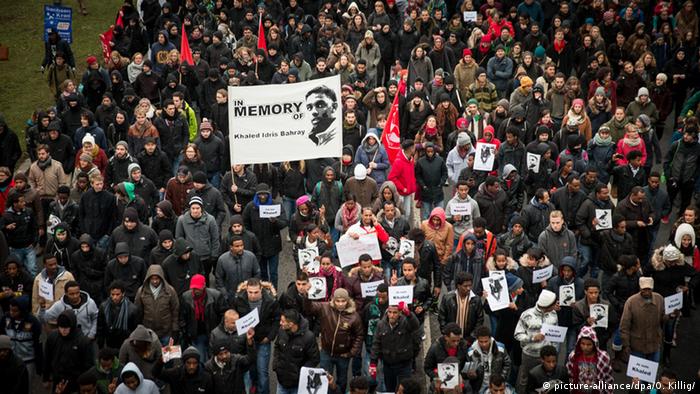 Under the slogan "Rights and security for refugees - in memory of Khaled," the march on Saturday aimed not only to remember Khaled I., but also to show a sign of solidarity with asylum seekers and refugees in Dresden, particularly in light of an apparent increase in xenophobic sentiment in recent months.

Following in the footsteps of mourners across the world who last weekend remembered the Paris attack victims with the slogan "Je suis Charlie," many of those marching in memory of Khaled I. on Saturday were seen holding signs bearing the words "Ich bin Khaled" (I am Khaled).

Amid claims that Khaled I.'s stabbing could have been racially motivated, the participants at the march also demanded an explanation for his death and criticized the anti-Islamization group PEGIDA, which the marchers accuse of turning Dresden into a "center of xenophobia."

The PEGIDA protest movement, which loosely translates as "Patriotic Europeans Against the Islamization of the West" has grown in popularity across Germany over the past 13 weeks. In most cities, counterdemonstrators have outnumbered PEGIDA. However, at the group's most recent Dresden rally on Monday, a record 25,000 PEGIDA supporters marched through Saxony's capital.

Khaled I.'s body was found on Tuesday morning behind an apartment block in Dresden's Leubnitz-Neuostra neighborhood, where he had lived since September. Police had initially denied an external influence, saying only after the autopsy that he had suffered a violent death by knife wounds.

According to German public broadcaster MDR, authorities have continued to make little progress in recent days, with very few witnesses coming forward. Khaled I.'s seven flat mates and neighbors are yet to be interviewed as part of the investigation, with analysis of CCTV from nearby supermarkets also still pending.

In an interview with German radio broadcaster WDR on Saturday, politician and domestic policy spokesman for the Green party, Volker Beck, criticized Dresden police for their handling of the investigation.

"There's a suspicion that criminal justice has been prevented because the approach to the investigation was unprofessional," Beck said, adding that, "Officials didn't secure the crime scene sufficiently, so traces were lost."

"Possible errors should be investigated in order to remedy them in the future," he said.

On Thursday, Dresden Mayor Helma Orosz urged the public not to jump to conclusions about cause of the Eritrean's violent death, but added that the incident was shocking and raises many questions.

Dresden's Christian community will also hold a remembrance service for Khaled I. on Sunday at a Protestant church in the neighborhood where the body was discovered. Similar events are also scheduled to be held in the eastern German cities of Leipzig, Potsdam and Berlin.