Using professional harvesting equipment, the criminals stole €8,000 of grapes. Police are calling for witnesses to come forward after the crime was committed in broad daylight. 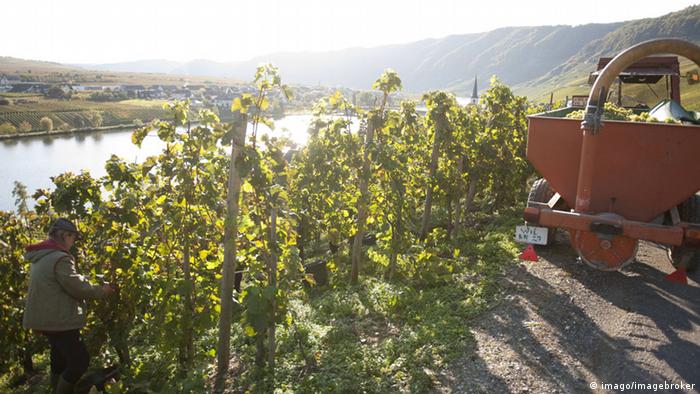 Police in the southern German town of Hassloch reported on Monday that thieves had made off with an entire vineyard of wine grapes in broad daylight. The devious criminals made off with €8,000 ($9,242) worth of riesling white wine grapes.

"The unknown offenders … used a professional harvesting machine over the entire surface" of the vineyard, according to the police report.

The crime was carried out on Wednesday between 4 p.m. and 6 p.m.. The thieves absconded with 1,600 kilograms (3,527 pounds) of grapes in the village of Deidesheim, just north of Hassloch.

Deidesheim lies in the state of Rhineland-Palatinate, which despite its small size is home to six of Germany's 13 wine-producing regions. The area is especially famous for riesling, but is also home to the Schloss Wachenheim Group, the worldwide leader in sparkling wine production. The 13,000 vintners in the area account for 90 percent of Germany's wine exports.

Where is most of Germany's wine produced? Who began cultivating the vineyards? What extinct volcanoes make the Eifel a natural attraction? Test your knowledge of Rhineland-Palatinate. (20.09.2018)

Carolin Klöckner will wear the crown of the 70th German Wine Queen and represent the country's wine at home and abroad. (29.09.2018)