The unusually hot German summer was a hindrance to many farmers, but Germany's winemakers aren't complaining. Estimates show there'll be no shortage of German wine next year — cheers to that! 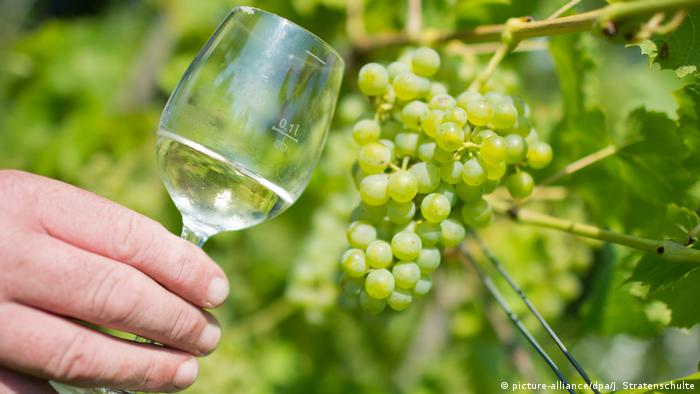 A 9.75-million-hectoliter (one hectolitre equals 100 liters) total harvest is expected this year — 1 million hectoliters higher than the five-year average between 2012 and 2017, and 2 million more than last year's unusually low yield.

The crop for Germany's most popular wine variety, Riesling, is expected to almost quadruple in size, going from 557,000 hectoliters last year to an expected 2.08 million.

The German Wine Institute (DWI) is optimistic not only about the extent of 2018's harvest, but also about the quality of the vintage.

"We will have very good yields and also very good quality," the DWI's Ernst Büscher said. "The condition of the grapes is abnormally good because of the very sunny and dry weather that's persisting."

Of the total 2018 vintage, 64 percent will be white and 36 percent will be red. In the Mosel (90 percent), Rheingau (85 percent) and Middle Rhine (86 percent) growing regions, white grapes are the main crop.

Germany's male wine queen steps down from the throne

Sven Finke-Bieger became a beloved male wine queen in Germany in 2016, when officials couldn't find a woman to take the crown. On Friday he stepped down after a two-year-term on the throne. (10.08.2018)

Saarmojis: German state of Saarland gets its very own emojis

People living in Germany's smallest state, Saarland, are proud of their home and their wine-drinking, barbecuing, easygoing culture. Now there is a way for Saarländer to show off that pride with tailor-made emojis. (15.03.2018)

Premium wines from the Moselle Valley