It is a small festival, but the issues it tackles are major: The 8th Without Borders Film Festival - International Film Festival Bad Saarow explores issues like human rights, human dignity and humanity.

Bad Saarow is a village of 5,000 inhabitants on Lake Scharmützelsee in the eastern German state of Brandenburg. Once a year, the spa town becomes the backdrop for a film festival that presents local and international productions alike.

The festival also sees itself as an integration project with the aim of "reaching young people, in particular with a migration background," said festival director Susanne Suermondt, pointing out that resentment towards foreigners is pronounced in the region, and that the far-right Alternative for Germany (AfD) party came in a strong second in 2019 local elections.

So this year, the festival is showing Masks for all, a short film that looks at how the refugees and the locals coexist. It was filmed in neighboring Storkow and documents how Germans and refugees from Somalia and Syria got together to sew about 3,000 face masks that were then offered free of charge to the people of Storkow. This willingness to act beyond their own needs is a sign of courage, Suermondt told DW. 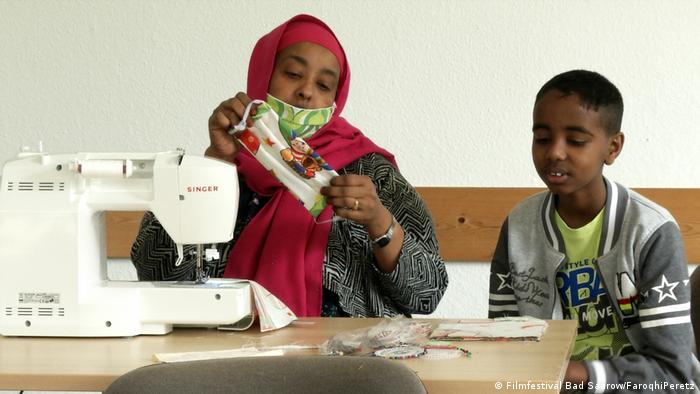 Refugees were the protagonists in 'Masks for all'

Courage is the motto of this year's festival — the courage to "always be prepared to take a risk, to overcome one's own limits," Suermondt said. "Courage has many faces," the festival director added.

Khatera, the protagonist in Sahra Mani's documentary A Thousand Girls Like Me, is one of them. Khatera dared to fight against the systematic oppression of women in Afghanistan. Raped by her father, she became pregnant but was not allowed to have an abortion because it was illegal — just as illegal as having a child out of wedlock. Her uncle threatened to kill her, a judge accused her of lying but Khatera did not give up, single-mindedly pursuing the goal of bringing her father to justice for what he did to her.

The story of a woman's struggle against Afghanistan's corrupt legal system is one of 13 films shown in the four-day festival. The German and international productions all take a different look at courage, whether it is the courage to stand by oneself and one's body in the film Cocoon, to fulfill a long awaited dream in the movie Love Sarah or to make the world a better place in But beautiful.

Restrictions due to coronavirus

The current situation made it very difficult to get the films at all, said Suermondt. For the first time ever, she said, she had to get funding in order to install a hygiene officer and implement a hygiene concept. Now, instead of 300 guests per screening, 90 people can watch the festival selections, some of them open air.

The "Film without Borders" festival runs from September 17 to 20. Deutsche Welle is media partner.

Venice Film Festival: Cinema as the antidote to coronavirus depression