The White House hosted the first in-person summit Friday of "The Quad" leaders, who, in addition to US President Joe Biden, include Australia's Scott Morrison, India's Narendra Modi and Japan's Yoshihide Suga.

"We share a common vision for the future, and we’re coming together to meet the key challenges of the 21st century," Biden said on Twitter.

"We stand for the rule of law, freedom of navigation and overflight, peaceful resolution of disputes, democratic values, and territorial integrity of states," the four leaders said in a joint statement.

Quad leaders agreed to cooperate on vaccines, clean energy and space, Suga said after the meeting. The Japanese prime minister also said the Quad meeting, which was convened to discuss the importance of US involvement in the Pacific, would now be held every year.

How will 'The Quad' influence Washington-Beijing rivalry?

Though China was not officially on the agenda, a US official stressed to reporters the importance of the summit in highlighting the need for a "free and open Indo-Pacific." In Washington, the phrase serves as shorthand for standing up to China's efforts to dominate the region economically and militarily, including by controlling vital sea lanes.

Quad countries agreed to work closer together and share satellite data "for peaceful purposes and consult on rules for sustainable use of outer space," they said in a joint statement.

US officials were keen to stress the Quad is not a military alliance.

What was discussed on Pakistan?

At the end of a two-hour meeting, Indian Foreign Minister Harsh Vardhan Shringla said Biden and other leaders had agreed to keep a close eye on historic rival Pakistan.

He said Pakistan was "projecting itself as a facilitator whereas it has really been in many senses an instigator of some of the problems in our neighborhood and beyond."

Pakistan, which backed the Taliban when it was in power from 1996 to 2001, quickly switched sides and supported the US during its occupation of Afghanistan.

But US officials have long accused Islamabad's intelligence services of supporting the Taliban, because of US links with Indian leaders.

US Secretary of State Antony Blinken thanked Pakistani Foreign Secretary Shah Mahmood Qureshi on the sidelines of the UN General Assembly on Thursday. Blinken said Pakistan had helped to "achieve our common objective" of evacuating US citizens.

What about COVID-19 vaccines?

At the virtual meeting, one of the main priorities was boosting India's capacity to produce COVID-19 vaccines. At the White House meeting Friday, officials are said to prepare for major announcements around the ongoing coronavirus pandemic and climate change as well as a slate of future bilateral talks between leaders.

India's Modi said his country will allow the export of 8 million one-dose Johnson & Johnson COVID-19 vaccines by the end of October.

The Quad's plans to supply a billion jabs across Asia, made earlier this year, were put on hold after India faced a large outbreak at home and halted exports to other countries.

The Quad is also expected to announce plans to bolster semiconductor supply chains and efforts to bring graduate and doctoral students in science, technology, engineering and math to US universities.

What else was agreed?

The US, Australia, Japan and India pledged to work together to fight cyber threats, promote resilience and secure critical infrastructure, according to the four leaders. They will meet regularly to map needs and opportunities, the statement added. 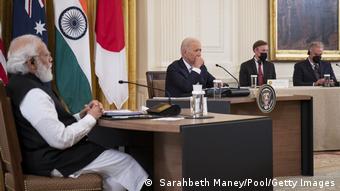 The countries' leaders welcomed an EU strategy proposal for the Indo-Pacific region, laid plans to roll out 5G networks together and set about trying to tackle climate change.

They pledged to work towards "public-private cooperation," voiced support for small island states, especially in the Pacific, and crack down on illegal fishing.

Australia's Morrison said the Quad was a "very practical initiative" aiming to have "a region that we wish to be always free from coercion."

Biden said that members of the Quad were "four major democracies with a long history of cooperation."

He added: "We know how to get things done and we are up to the challenge."

How are Quad leaders reacting to AUKUS?

Last week, the US announced a new military alliance with the UK and Australia that will see Australia receive nuclear submarines, giving it a competitive edge over China's growing naval prowess.

India and Japan welcomed the the partnership, dubbed "AUKUS," as a sign of deepening US involvement in the region to counterbalance China. 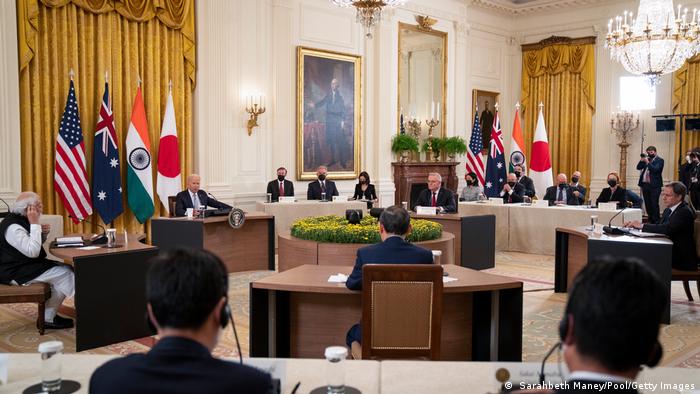 Michael Green, who served as senior director for Asia at the National Security Council under George W. Bush, told AP: "it will really for the next 50 years reset the trajectories in naval power in the Pacific and from the perspective of those countries stabilize things as China massively builds up its naval forces."

For the White House, the Quad summit was also a chance to renew its focus on diplomacy and the Indo-Pacific region, two primary goals of the Biden administration after exiting Afghanistan and the previous administration's efforts to rip up many multilateral agreements.The leaders of the Quad countries have been working together since the tsunami in the Indian Ocean in 2004. But the four heads of state only met in the format known as "The Quad" for the first time in March.

Can US and Japan push back against China in Indo-Pacific?