The Netherlands plans to pave streets with solar panels | Environment| All topics from climate change to conservation | DW | 28.04.2011

The Netherlands plans to pave streets with solar panels

Amsterdam feels about as close to being owned by cyclists as any city can. Yet if that's not environmentally friendly enough, the Dutch are now looking to turn their bike paths, and streets, into clean power plants. 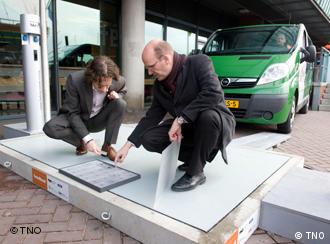 Some technical adjustments are needed, but roads offer plenty of surface area

Paving the streets of the Netherlands with solar panels will kick off with a trial in the small town of Krommenie, 20 kilometers (12 miles) north of Amsterdam, next year.

The city lane opposite the town's train station will be covered with 100 meters (328 feet) of solar panels.

Until now, solar panels have been placed in locations with no other purpose than to extract energy from the sun. This is about to change.

"Solar energy is a rather diffused energy source and you need a lot of area to use it. And these roads, this is some space we already use," said Sten de Wit, a project manager at the Netherlands Organization for Applied Scientific Research (TNO) that came up with the idea. 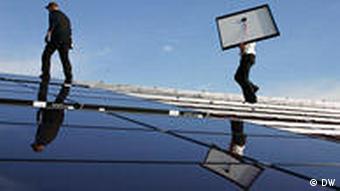 Solar panels on the street will differ from those on rooftops

New technology was needed to develop the 1.5 by 2.5 meter solar tiles necessary for the solar paths. A key challenge was establishing the right surface for the roads.

The slabs incorporate a transparent top, an optical layer of tiny lenses and beneath that a series of small flat solar cells housed in concrete.

The glass top of the solar blocks is highly resistant and has been roughened to allow grip.

"The idea is if you roughened the surface of the top layer, perhaps you get some pollution over time, not all the light will come through the top layer. So what we do is we have these special kind of lenses which are very flat and they concentrate, they focus the light on to the relatively small solar cells and in that way you can use the light that comes through the top layer rather efficiently," Sten de Wit says.

At a laboratory in the Dutch town of Delft, a machine tests the structure's resistance. Some of the tests that are now taking place will help determine how many cars can drive over it before it wears out.

The blocks will also be placed slightly atilt to ensure water runs down to the roadside when it rains – a common occurrence in the Netherlands. 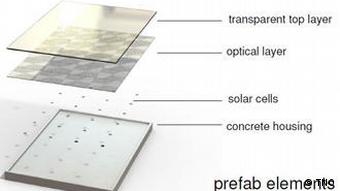 The solar panel will be covered with a transparent top layer

Will the project survive in the real world?

The pilot project is expected to last for five years and the investors will be looking at how this state of the art technology performs in the wear and tear of the real world, where pollution or heavy traffic could impair the panels' ability to gather sunlight.

The experiment is being backed by the local regional government, and Green Left politician Bert Heller is one of the project's most enthusiastic supporters.

"In the whole of the Netherlands there's about 137,000 kilometers of roads and bicycle tracks - if you could put this innovation on all of those kilometers, you'd be able to fuel all the cars now driving those roads with electricity."

Indeed, one of the goals is to connect the system to a future electric car program.

The Northern Dutch province where Krommenie is located has provided an initial investment of 50,000 euros ($74,000) to build the prototype solar road, and it expects to recoup this money if the project advances.

"It's a relatively small amount of money we put into it, if it comes into production then of course we would like the production in our province. So there will be a clear economic side-effect." 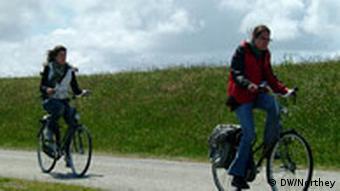 TNO project manager Sten de Wit agrees that this is an investment in the future. "If you look at the comparison with a normal road, then of course it will be more expensive. But on the other hand, you get a lot of energy out of this system."

"The idea is that we want to build a system which eventually generates so much energy that the cost of the road over the duration of the lifetime is not that much higher than the cost of a normal road," he said.

TNO hopes that every 70 square meters (753 square feet) of solar road will generate a year's worth of energy for a medium-sized household.

Of course, not all roads can expect to be equipped with the technology. Shady and traffic-dense regions would be pointless, but elsewhere Dutch people can soon expect to see their dark paved streets turned to light transparent glass.

Work on what could become Asia's largest solar village is underway in the Indian state Gujarat. Renewable energy projects in India are regarded as particularly green since they reduce the country's dependence on coal. (31.12.2010)

The European Union is investing nearly two million euros in the ESAIL project, which was initially conceived of by a Finnish researcher. Now, the project has four other EU member states on baord. (10.12.2010)

German Foreign Minister Guido Westerwelle is spending the early part of this week in Morocco. He wants to talk about energy, but his hosts have put a different issue on the agenda. (16.11.2010)