Solar wind sail could be the fastest object ever built | Science| In-depth reporting on science and technology | DW | 10.12.2010

The European Union is investing nearly two million euros in the ESAIL project, which was initially conceived of by a Finnish researcher. Now, the project has four other EU member states on baord. 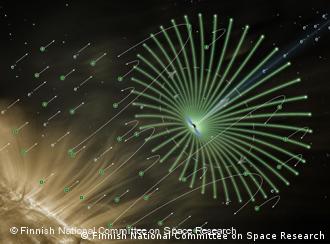 The ESAIL project expects to launch before 2013

On Wednesday and Thursday, the first meeting of the electric solar wind sail (ESAIL) – newly sponsored by the European Union - was held at the Finnish Metereological Institute in Helsinki.

Earlier this year, the European Union gave its blessing with 1.7 million euro (2.25 million dollars) to construct laboratory prototypes of the ESAIL project, whose ultimate goal is to launch the sail into space on a one kilogram Estonian nanosatellite by the end of 2012.

ESAIL is now a joint operation with representatives from Finland, Estonia, Germany, Italy and Sweden.

Solar wind is a constant stream of charged particles that emanate from the sun. A solar sail, which has been used previously, is made of a material that blocks those particles and then propel a spacecraft forward - in the same way a seafaring vessel uses wind to fill its sails.

However, this new Finnish design, which was invented in 2006 by Pekka Janhunen, a researcher at the Finnish Meteorological Institute, creates a "virtual" sail by forming an electric field with a radius of 100 meters from a small wire.

"The field forms an obstacle and so the solar wind particles are scattered in different directions," he told Deutsche Welle. "It's more like an electric parachute than a sail. It creates an enhanced friction between the solar wind flow and the wire."

If successful, Janhunen added, then anything that this small wire was attached to, could theoretically travel approximately 50 kilometers per second, or "a factor of four or five faster than anything else ever constructed."

Using solar wind as a propulsion system in this way can only really be used between planets, so this type of design would be best for Earth-Mars, or other types of longer distance missions.

Other astronomers are also excited about the prospect of this technology.

"In the other solar sail projects the energy comes from solar photons, the weightless 'light-particles'. This project gets the energy from the ions in the solar wind," explained Timo Laitinen, an astronomy lecturer at the University of Turku in Finland, in an interview with Deutsche Welle.

"The technology is completely different, and to my understanding more feasible than the 'traditional' solar sail technology."