A team of scientists at the Massachusetts Institute of Technology have discovered the first planetary atmosphere with more carbon than oxygen. The find suggests there could be mountains made of diamond nearby. 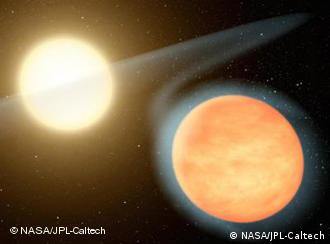 WASP-12b has been found to be a carbon-rich planet

A team at the Massachusetts Institute of Technology researching a large gaseous exoplanet, or a planet outside our solar system, have discovered an unusual composition of its atmosphere that could redefine our understanding of how life is formed.

The study was published Wednesday in the journal Nature.

The planet, known as WASP-12b, is 1.4 times the mass of Jupiter and located about 1,200 light years away and was discovered in 2009 by researchers at the United Kingdom-based consortium for Wide Angle Search for Planets (WASP), who are also co-authors of the new study. 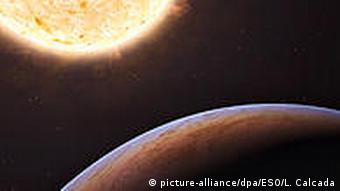 "This is new territory and will motivate researchers to study what the interiors of carbon-rich planets could be made of," said Nikku Madhusudhan, in a statement.

She is the lead author of the study, and now a postdoctoral researcher at Princeton University, in the United States.

Although WASP-12b is a "hot Jupiter" - a Jupiter-sized, extremely hot planet consisting mainly of gas - and is therefore unlikely to host life, scientists believe the planet's unique chemistry could overturn our notions of the necessary ingredients for life.

The researchers believe the abundance of carbon was due to the formation of the planet from rocky materials high in carbon as opposed to icy bodies like comets. This suggests that there may be an entire range of carbon abundances available for making planets in that system.

If there are any rocky planets in the system, it is likely they are covered in tar-like substances rich in organic substances – since carbon is one of what scientists consider the six essential elements of life (the other five being oxygen, hydrogen, nitrogen, phosphorus and sulphur).

If detected, these smaller planets could also have carbon-rich atmospheres, and any life might have to survive with very little water and oxygen and an abundance of methane. This is difficult to square with our current knowledge of the chemical properties of life.

But since NASA recently purported to have discovered bacteria that had replaced the phosphorus in its DNA with arsenic, scientists may soon be forced to re-consider their assessment of the necessary conditions and elements of life. 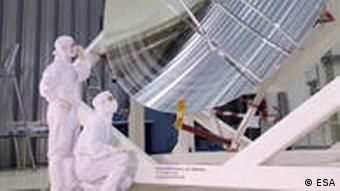 Other researchers said that these are considerations for the future.

"The honest answer is that that's very speculative," said Coel Hellier, a professor of astrophysics at Keele University in the United Kingdom, and another co-author of the paper, in an interview with Deutsche Welle.

"We don't really know whether life could live in that sort of environment. There are certainly a lot of planets out there that do have very methane-rich atmospheres and very little oxygen, so it's certainly worth thinking about."

The other striking image that the paper posits suggests that the possible rocky planets near WASP-12b could have mountains made of diamond. Hellier believes this is easily imaginable.

"It's quite possible that there are rocky planets in that system, even though they are too small for us to detect," he said.

"If there are, then they would have carbon-rich rock, rather than what we have on Earth, which is very oxygen-rich – most of the Earth's crust is made out of rock that is roughly half oxygen. If you have rock in an environment that is very carbon-rich, then you'd expect to have rocks which could be diamond or graphite, which are different forms of carbon."

Astronomers can figure out a planet's atmospheric composition by observing its flux, or the light emitted by the planet, at different wavelengths.

The team, coordinated by Joe Harrington, a planetary scientist at the University of Central Florida, used NASA's Spitzer Space Telescope to observe the flux from WASP-12b, at four wavelengths, right before it passed behind its star, an event known as secondary eclipse.

While the first exoplanet was only discovered 15 years ago, there has been an extremely rapid rate of growth since then.

"Astronomers have now found about 500 of them in total," Heiller added. "We're really now for the first time able to actually measure and detect what their atmospheres are made of. This is a significant step towards showing that we now have the technology to do that."

Frederic Pont, senior lecturer in astrophysics at the University of Exeter in the UK, admires the analysis behind the new paper, but is wary of excitable media reports and premature conclusions.

"It’s very good work, the team is excellent," he told Deutsche Welle. "It’s very interesting, but there are I think just seven data points. Usually if you want to take a spectroscopy of a planet you’re talking about hundreds of points, so with seven points you need a lot of interpolation."

Pont lamented the tendency to oversimplification in the media coverage of new exoplanetary discoveries. "It’s work in progress, right?" he said. "Usually the way it works is this: a result is published, and then the debate starts, and maybe two or three years later we know what was correct or not. But in the media we get the impression that the scientific paper IS the discovery."

"It’s a very complex set of hypotheses to get to these results," he said of the WASP-12b paper. "They don’t see carbon and oxygen, they see the indirect signature of some molecules and they have to assume the carbon and oxygen equilibrium. But the results themselves are extraordinary. They are really at the forefront of what we can do."

Astronomers have discovered a planetary system with nearly as many planets as our own. And it's not that far away, galactically speaking. (25.08.2010)

Astronomers discover Jupiter-like planet in a galaxy far, far away

Scientists have discovered a new planet 1,500 light years away. Moderately cool and roughly the size of Jupiter, CoRoT-9b is a gem for researchers studying planets outside our solar system. (18.03.2010)