Angela Merkel's ruling conservatives have long denied gays and lesbians the right to marry. That has left Germany lagging behind internationally in terms of equal rights. So why the U-turn from Chancellor Merkel now? 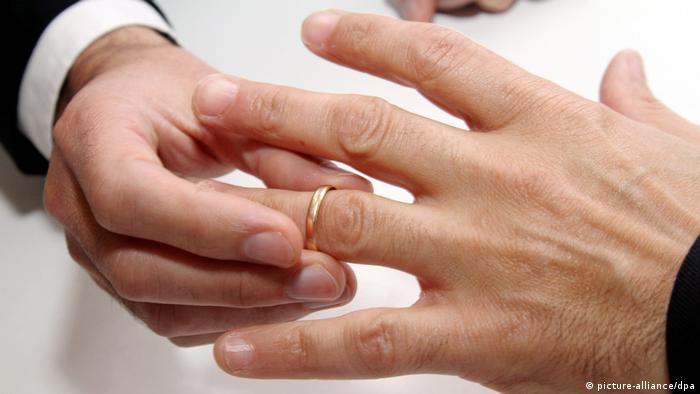 "Yes to marriage! A modern Union with us." Those were the words printed on the invitation for Thursday's annual congregation of Lesbians and Gays in the Union (LSU). The LSU, an association within the CDU and CSU parties, has for years been calling for marriage equality for gay and lesbian people. The LSU is not an official party organization, but rather an interest group founded in 1999.

Discussions on gay marriage have been going on for decades in the Union. So far, the LSU's biggest success was getting the topic of tax equality for homosexual partners onto the agenda for the Christian Democratic Union's annual convention in 2012. The proposal, however, was rejected.

Germany's current CDU and Social Democratic Party (SPD) ruling coalition has also done little to improve the situation, despite pledges to fight discrimination and consider marriage equality for all. A few instances of administrative discrimination have been done away with, but no fundamental changes have ever been made. In adhering to party discipline, requests submitted by individual German states, which have at times even made it as far as the parliamentary judicial committee, were left to die in committee. Requests by federal opposition parties were overridden. Union politicians evaded such issues by pointing to the registered civil partnership, often referred to as "marriage lite," that was put in place for gays and lesbians. That institution was established by Germany's SPD-Green government, under Chancellor Gerhard Schröder, back in 2001. Although the law failed to guarantee the right of gay couples to adopt, nor secure them tax equality, it was progressive enough that Germany, along with the Netherlands, led the world on the topic at the time.

In the wake of CDU chairwoman and federal Chancellor Angela Merkel's abrupt change of course in labeling gay marriage as a "question of conscience," many people working in parliamentary offices – especially those of openly gay CDU parliamentarians – are scratching their heads. Way back in 2012, a group of such parliamentarians formed the "wild thirteen" to fight for similar rights. And although Merkel knows the issue well, she has always been thought of as an obstruction to progress. Many remember a 2013 town hall meeting in which she said: "I'll be honest, I have a hard time with total equality (…) I am uncertain about children's well-being for instance." She felt the need to express her opinion without wanting to discriminate against anyone.

So why is Merkel for marriage equality now? The most widely used explanation among political pundits and professionals in Berlin is that she wants to keep the topic out of the election campaign. The liberal Free Democratic Party (FDP), the Green and Left parties and the SPD have all been stumping on marriage equality and have, in part, made it a prerequisite for any possible ruling coalition after September's election. The Greens were for the concept in 2005, the Left and SPD in 2011, and the FDP in 2012. It seems that the CDU and CSU can no longer avoid the issue.

Now Merkel has declared the issue a question of conscience. That means that a simple majority within the Union's parliamentary group will not determine the vote, but rather members' votes will be tallied individually. Regardless of whether a vote is taken this week or during the next legislative session: Other parties will no longer be able to score points with the issue of gay marriage. Some call that stealing issues/issue hijacking, but for Merkel it is, as always, simply a question of pragmatism 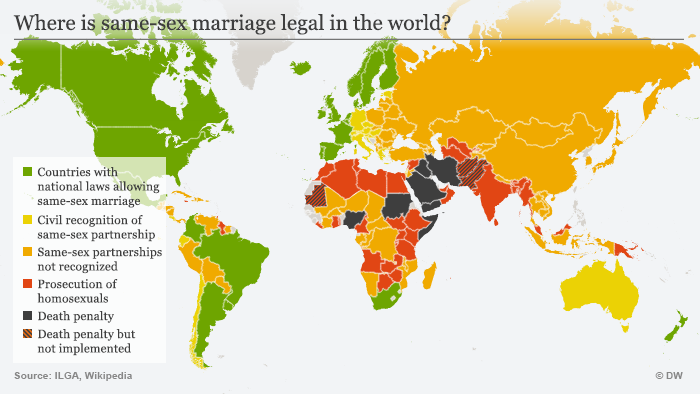 We discuss topics 'much more exhaustively'

The decision also came as a surprise to the CDU's smaller Bavarian sister party, the CSU. Gerda Hasselfeldt, who chairs the party's national committee, has been a liaison between the CDU and CSU for the last six-and-a-half years. When asked to give concrete reasons for the party's opposition to marriage equality, she gave two.

First, she said, was the fact that Germany's constitution defines marriage as a union between a man and a woman. A fact that Germany's Supreme Court has upheld. Secondly, she said that the issue has carried less weight for parliamentarians in the past. Explaining that it was not until recently that the topic had become socially and politically relevant.

But why has it taken so long for this topic to be purposefully discussed in Germany? Why is Germany lagging so far behind compared to other countries around Europe and across the globe? Hasselfeldt told DW: "Because we discuss topics much more exhaustively here, rather than simply orienting ourselves on the topic of the day." She says that German politicians are much more oriented towards their bases, adding, "that is especially true of the Union parties." That is why the Union invests much more time and effort into fundamentally discussing the topic, making sure that all sides of the argument get the feeling that their concerns are being taken seriously. She says it is a tedious process, but one that has been productive.

With that, Hasselfeldt is alluding to the fact that most of the CDU/CSU base is made up of rural voters. Noting that many of them see issues through a much more conservative lens than urban voters, who tend to be more liberal. As party chair, Merkel has consistently attempted to strengthen the CDU's appeal to urban voters, but that has been extremely difficult thus far.

A matter of time

But in the past Merkel has often shown little regard for conservative voters' sensitivities when it came to issues like scrapping compulsory military service or shutting down nuclear power plants. The result has been that an increasing number of conservative voters cast their lot with the right-wing party Alternative for Germany (AfD).

It remains to be seen how conservative voters will react to the chancellor's U-turn on gay marriage. AfD chairwoman Frauke Petry reacted to Merkel's announcement immediately, sending out a press statement with the headline: "Merkel open to 'gay marriage' – AfD open to conservative voters." 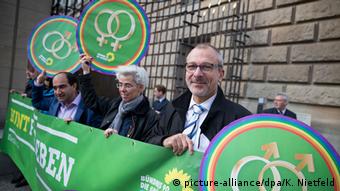 Hasselfeldt denies that the Bavarian CSU, which is even more rural than the CSU, has been an impediment to gay marriage. She sees no "major differences" between the two parties on the issue. Adding that discussions in both parties have been passionate but respectful. Now it seems that the time has come for the CDU and the CSU to make up their minds.

Meanwhile, homosexuality in politics has also become much more commonplace. Many homosexuals occupy important government posts and live openly in same-sex relationships. That is a far cry from 2004, when Guido Westerwelle became the first top-tier German politician to come out as gay. Then again, Westerwelle, who passed away last year, was not a member of either of the Union parties, but rather a member of the liberal FDP.

Gay marriage could become a reality in Germany almost overnight after Chancellor Merkel made certain concessions. However, the issue is also being used as a political bargaining ahead of the September 24 elections. (27.06.2017)