German authorities have approved the first visa for a gay Chechen to take shelter in Germany, following reports that police were torturing gays in the predominantly Muslim republic. Chechen officials denied the claims. 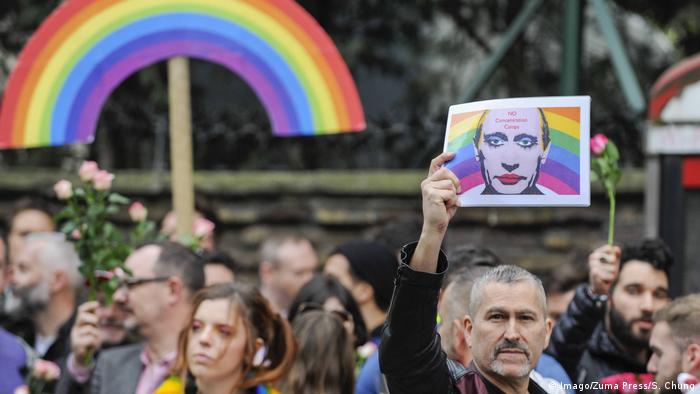 German Chancellor Angela Merkel has pressed the Russian president to protect gays in Chechnya and take into account rights of anti-government protesters. They met in Sochi for "intensive" talks about global crises. (02.05.2017)

The French and Russian presidents have met in Versailles and discussed "points of friction." These included Russian media "organs of influence and propaganda" in the French election campaign. (29.05.2017)

The first Chechen man arrived in Germany earlier this week on a special humanitarian visa, German Foreign Ministry told the AP news agency on Thursday. Several other applicants were invited to make statements in the German embassy in Moscow.

"We are happy to be able to help in especially difficult cases," the Foreign Ministry told the online German newspaper Tagesspiegel.

People from outside Germany can obtain a residence permit on urgent humanitarian grounds, but such cases are very rare, according to the newspaper.

"In every case, the German government checks which meaningful protection can be granted in the interest of the affected person," the diplomats said.

Chechnya is a southern republic within the Russian Federation, located on the border with Georgia. The population is mostly Muslim and conservative.

In March, Russian media reported that Chechen authorities had been rounding up gays and torturing them. Over 100 men were allegedly detained during the crackdown, and two died. The regime in Grozny, led by Chechen warlord Ramzan Kadyrov, denied the allegations.

According to Russian media, conservative Chechen migrants also form a strong community in Germany, occasionally using violence on Chechens who reject the strict interpretation of the Koran.