The future of youth football in Germany

German football has an issue at youth level. Next week, a decision will be made on the reforms that could be suggested. There is an approach that could revolutionize the country's approach to youth football. 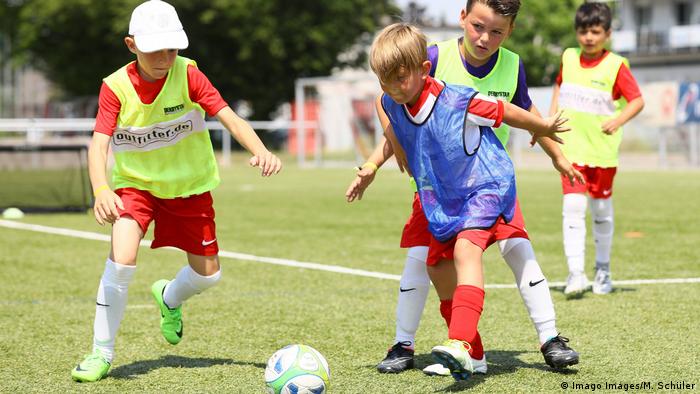 Next week, the DFB's committee will decide on reforms across the country, with a particular focus being put on the issues at the youth level of football. After a shocking World Cup in Russia and a surge in the transfer market towards foreign players who possess strong dribbling ability, Germany has finally recognized the time to act. A solution is set to be put into place, but the concept has already been met with resistance.

Funiño, or as the DFB are keen to call it "Mini-Fußball" could revolutionize the way youth football is played, increasing the enjoyment of all young players as well as improving the likelihood of more individual talents reaching the top. Professor Matthias Lochmann, a Fußball-Lehrer (Germany's highest coaching badge) and a man with two PhDs, is at the forefront of this change. Lochmann's work at the Friedrich-Alexander University Erlangen-Nürnberg (FAU) has enhanced the idea of Horst Wein, one of the great football minds who sadly passed in 2016 aged 75. The project that started with 56 kids in a village is set to be played by two million kids across Germany this summer. 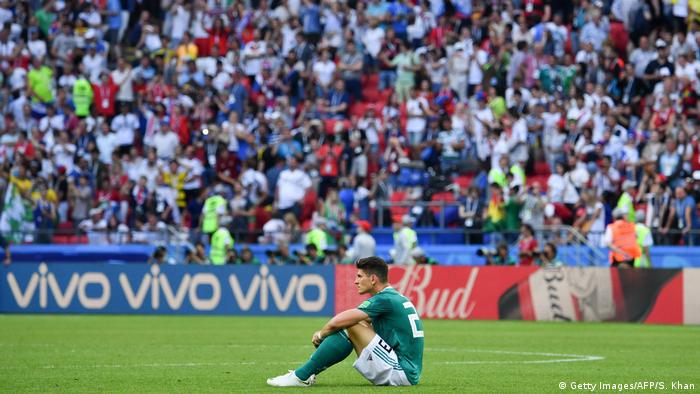 Germany were knocked out of the group stage at the 2018 World Cup.

The base concept is two teams of three trying to attack and defend two mini goals on a small pitch (eight to nine of these games can be played on one standard football pitch). Each team has one sub and every time a team scores the sub must replace a teammate. Goals can only be scored inside an attacking area and there are always three balls waiting on the side of the field to be used for the restart. Instead of leagues, games would be played at ‘festivals' where teams compete against each other on the day. The game can of course gradually be expanded to four on four and then five on five, but there's a strong argument to be made that the three-on-three format is where the game truly shines. 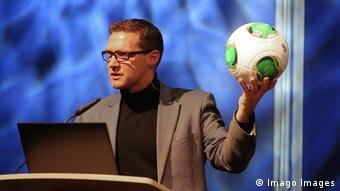 Matthias Lochmann, the sports scientist behind the implementation of Funiño in Germany.

After three years of testing, Lochmann's idea is set to change German football completely. The positives of the format are plentiful. Young kids play more often, they're exposed to one-on-one situations more often and naturally get more touches of the ball. With no offsides, corners or throw-ins there are far more moments where players are forced to decide how to move the ball around. Best of all though, it gives all players a chance to do what everyone who plays football at that age wants to do - score goals. Fewer kids drop out due to a lack of playing time or a lack of fun. It removes the fixation on positions and removes the over, and sometimes damaging, influence of coaches on kids that young.

If this approach is introduced, and the signs look good, it will be in place for the start of next season. It will be offered not as a replacement to the current format but as an alternative. Roughly speaking that means kids aged 5-9 will have the chance to play Funiño, with those from 10 upwards moving onto a game with two goals and a goalkeeper. Bundesliga head coaches Julian Nagelsmann and Sandro Schwarz are both fans.

Despite the many positives though, the sheer suggestion of such an alternative has already been met with opposition. Germany's stubbornness at the top level has, once again, reared its ugly head. There's a suggestion that goalkeepers would be left out, and that the current tactical knowledge of young players would be lost, swinging the scales too far in favor of individualization. And that's before the pressure, from clubs and parents, is considered.

Lochmann is frustrated by the spread of misinformation. The game does allow for elite development, which would mean a stronger focus on a specific position, such as goalkeeping. There is also the option to adapt the game to include a goalkeeper. In that format, shots are allowed from the halfway line and the player in the keeper position is swapped out after every game. If applied to the game designed for the small goals the result is five times the amount of action for the keeper than in the usual seven-on-seven format that is currently in place. On top of that, kids are taught how to anticipate, command the area and be involved in the game. And in truth, a little less tactical knowledge in exchange for a bit more individual skill wouldn't be a bad thing for German football. It's about time the country started developing their own Jadon Sancho again, rather than having to go out and buy them.

DFB to acknowledge the problem?

Some aspects of the rigidness that cost Germany a successful World Cup in Russia remain though. While the failure at the tournament was good for opening ears, it might not open enough doors. Football remains a clique for a special group of connected men. Question marks remain about the amount of knowledge and flexibility in the key positions. The lack of professionalism at local association level is also a concern, which is particularly problematic when it comes to pushing through such reforms because change can come faster if it is controlled by local associations.

Lochmann, who is in danger of being ignored by the German FA for his work in starting this revolution, wants Germany to recognise the dust it needs to shake off. It needs to be brave, embrace innovation rather than chase it, and recognize that too often conservatism is holding Germany back.

That starts with the DFB. The world's largest sports federation in the world with nearly seven million members and 25,000 clubs needs to ask itself who and what it stands for. If 99.6 percent of the football players in the country are not professional then why does so little money flow back into the amateur game? And why are such reforms so hard to push through? The choice to implement Funiño would be an answer in favor of the country's children and the increased fun they would have playing one of the most popular sports in the world. That seems like the best place to start.