The corporate world ditches Trump in wake of Capitol riot | Business | Economy and finance news from a German perspective | DW | 12.01.2021

The corporate world ditches Trump in wake of Capitol riot

Deutsche Bank is the latest firm to distance itself from the US president following the storming of the Capitol. The threat of losing corporate campaign donations could be enough to make Republicans turn on their leader. 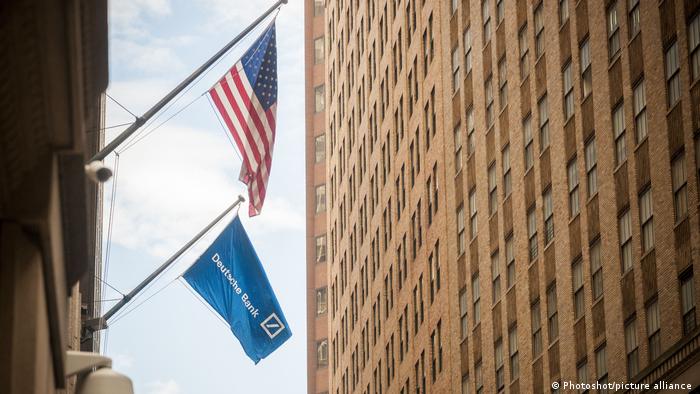 Citing sources familiar with the matter, US media on Tuesday reported that the bank would do no further business with the self-styled businessman, pointing to his reaction to the January 6 assault on the US Capitol.

That the president's long-term lender would drop him now comes as little surprise. Even before the November election, Deutsche Bank senior officials had said the company was seeking a way out of its long-term relationship with the contentious leader, who owes the institute hundreds of millions in loans and has been a constant source of bad press for the bank.

This week, Deutsche Bank saw an opportunity and took it. The firm has joined a growing list of corporations withdrawing support for the president and for members of the Republican Party over their role in the events at the Capitol.

In recent days, financial institutions Goldman Sachs, Citigroup, Morgan Stanley, JPMorgan Chase & Co. as well as others have announced they are cutting business ties or halting political donations in light of recent events. Some have said they will freeze donations to the Republican lawmakers who voted against certifying the results of the 2020 presidential election. Others say they will temporarily stop political contributions to both Republicans and Democrats.

This sudden jumping ship has pulled the curtain back on the role corporate leadership and money play in the US political machine.

Millions of campaign dollars at risk

American campaign finance law prohibits corporations and unions from spending to influence federal elections directly. However,  they are free to indirectly finance candidates or parties through donations to so-called PACs or SuperPACS, a practice used by many of the companies now distancing themselves from the events at the Capitol and threatening to withhold money.

PACs, or Political Action Committees, are committees organized to raise and spend funds with the purpose of electing or defeating political candidates. PACs allow unions and corporations to provide financial support in federal political races without violating US law.

PACs, first established in 1944, are subject to limits to how much they can donate in a given election cycle. The establishment of SuperPACs in 2010 provided donors with a way around this spending cap.
Instead of being donated directly to a campaign or political party, funds aggregated by SuperPACs are used to independently finance other aspects of federal campaigns, like advertisements that support or oppose a specific candidate. There are no limits to how much money SuperPACs can spend.

A day before the storming of the Capitol, Yale School of Management professor Jeffrey Sonnenfeld called a meeting of CEOs of some of the biggest companies in the country. The purpose: to discuss a corporate response to Trump's election challenge, US news outlet CNBC reported.

The group has met regularly over the years. According to the CRP, the group convened in November after the US presidential election as it became clear that Trump would favor an election challenge over concession. They also met in May 2020 following the death of George Floyd, which led to global protests against racism and police brutality.

According to the 2020 Edelmann Trust Barometer — a global, annual survey on trust and credibility — the public trusts CEOs ahead of journalists, religious leaders, and heads of state.

Attendees agreed donations should be denied to initiatives supporting Congress members who voted against the results of the presidential vote, Sonnenfeld told CNBC.

Whether companies will stick to this informal pledge remains to be seen. It would also be fair to question the significance of such promises in the direct wake of the last federal election. Voters went to the polls barely two months ago, and the next round of elections is a long way off.

But corporations are concerned that activist groups will hold them accountable publicly. Ads have already run accusing Republican lawmakers —  and their corporate backers — of trying to delegitimize legally cast ballots. In a tweet following the riot, White House economics reporter for the Washington Post Jeff Stein said lobbyists were speculating whether consumers would hold it against these companies.

Distancing themselves from the president allows the companies to signal their values and attempt to sway public opinion away from election denialism. While corporations tend to lean towards the Republican party's business-friendly policies, political instability is also not in their best interest.

According to Sonnenfeld, the CEOs said they want to "put our money where our mouth is" and that "divided communities, angry workforces and hostile work places is not in the interest of American business."