Big Tech CEOs grilled by US lawmakers in antitrust probe

The CEOs of Facebook, Google, Amazon and Apple have defended their companies in front of a US Congressional committee considering how to adapt US antitrust laws for the digital age. 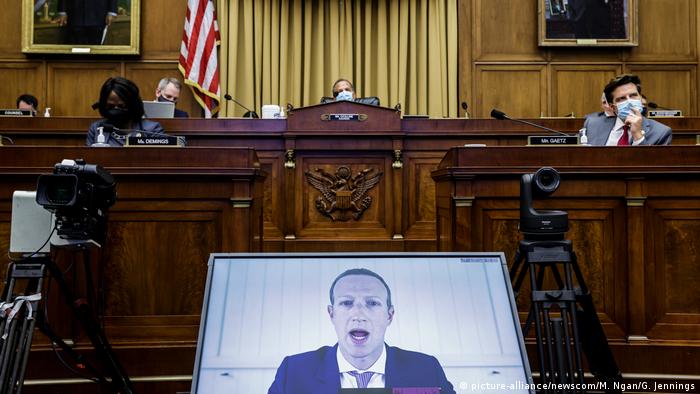 Amazon's Jeff Bezos, Apple's Tim Cook, Facebook's Mark Zuckerberg and Google's Sundar Pichai testified via video conference before a US Congress antitrust committee Wednesday. It is the first time all four have appeared together for a joint hearing.

Lawmakers accused the companies of stifling competition and abusing their market dominance at the expense of consumers and innovation.

Critics of tech giants say tougher regulations and new laws are needed for oversight of tech companies and consumer protection.

The executives maintained their companies offer essential services to consumers and encourage competition and presented data to lawmakers showing how competitive their respective markets are.

However, they sometimes struggled to answer direct questions about their business practices.

Amazon was accused of hurting small retailers by being both a retailer and a marketplace. The company was accused of taking data from vendors on its platform and using it to create Amazon labeled products.

In his first testimony before Congress, Amazon's Bezos said that while there is a policy against using seller data to aid private label business, he "couldn't guarantee" that the policy hadn't been violated.

Apple's App Store was said to force developers to use its payment system in order to have their apps on Apple devices.

Google's Pichai was questioned about ethical issues surrounding presenting third party data as being owned by Google and manipulating search engine results to the company's own advantage.

Pichai said that Google's search engine only blocks out websites to "comply with law," and otherwise search results are run by algorithms.

David Cicilline, the chairman of the House antitrust subcommittee, said the tech giants "have too much power."

"Whether it's through self-preferencing, predatory pricing, or requiring users to buy additional products, the dominant platforms have wielded their power in destructive, harmful ways in order to expand," Cicilline said.

The Democrat Congressman added that the COVID-19 pandemic will likely mean the companies will "emerge stronger and more powerful than ever before" as companies and business shift more operations online.

Current US antitrust laws make it difficult to crack down on companies for being too large or dominant without proving harm to consumers or abuse of market power.

The US Congress can rewrite antitrust laws, and the congressional committee would play a key role in drawing up a blueprint for new antitrust laws in the digital age. However, this would require a fundamental change in century-old US competition rules.

Amazon bans TikTok for employees, but flips back hours later

Amazon cited security risks while telling its employees to delete TikTok, the popular video-sharing app developed by a Chinese company. Just hours later, the company said the memo had been sent "in error."

The Verdi trade union called for the 48-hour strike to "step up the pace" of wage negotiations with the retail giant. The union has long sought a collective bargaining agreement for German Amazon employees.