The Afghan conference: A blueprint for victory or a call to retreat? | World | Breaking news and perspectives from around the globe | DW | 27.01.2010

The Afghan conference: A blueprint for victory or a call to retreat?

London is a long way from the battlefields of the Hindu Kush but on Thursday, the British capital will see the NATO allies and the Afghan government try to hammer out a viable strategy to defeat the Taliban. 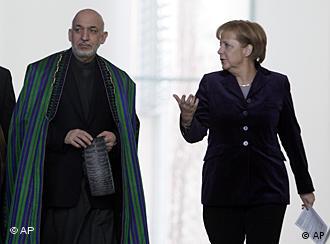 If improved war fighting is high on the collective agenda so are good governance, reconstruction and development, the persistent corruption that hampers them, and the entrenched drugs trade which helps fuel the war and finance terror.

The heavyweight diplomats at the conference are clearly US Secretary of State Hilary Clinton and the US Special Envoy to both Pakistan and Afghanistan Richard Holbrooke, who are expected to have close meetings with their European counterparts, especially British, French and German partners in NATO and ISAF.

While the US has always dominated allied efforts in Afghanistan since the overthrow of the Taliban regime in 2001, as the US military presence in Iraq is being reduced, strategic focus shifts to South Asia, and American troop levels in Afghanistan will more than double this year from 32,000 to 68,000. The war and therefore the allied agenda is all the more going to become an American-accented affair.

Washington is seeking another 10,000 European soldiers to join the 36,000 strong non-US, NATO and coalition contingent in the field, but thus far it seems unlikely to get them. Although there has been support for reinforcements from British Prime Minister Gordon Brown, French President Nicolas Sarkozy and German Chancellor Angela Merkel, the numbers being offered are relatively token. 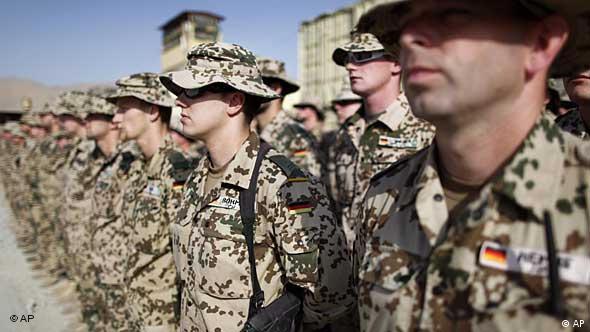 Germany looks set to boost the number of troops in Afghanistan, but far fewer than the US hoped for

Germany has promised another battalion of 850 soldiers. France thus far is unlikely to send more, though its soldiers unlike the German contingent, the Spanish and Italians, remain on combat operations, rather than security and reconstruction duties. Brown had called for 5,000 more pairs of boots on the ground, but its doubtful that they would be British troops, as the Ministry of Defense intends to make dramatic budget and equipment cuts, as part of larger government austerity measures, in light of the global economic turndown.

But Professor Malcolm Chalmers, an Afghan scholar at the Royal United Services Institute in London, told Deutsche Welle that "military burden sharing is less central to the Americans now…the division of labor with its allies matters less as they are able to shift from Iraq, they are going to go ahead regardless, but the level of commitment on the ground by their allies will determine their place at the table and how loudly their voices are heard in shaping policy."

Can the surge succeed?

The great hope in NATO corridors is that the massive surge of combat troops, especially in southeastern Afghanistan, and in particular Helmand where the Taliban have offered the fiercest resistance and where not incidentally much of their vital opium crop is grown, can start to tip the military balance in favor of the allies. "It's not impossible to make a real difference, if there were a real change in momentum and it could be sustained," Chalmers said.

But there are many hotspots in Afghanistan and NATO soldiers have to secure 650,000 square kilometers (250,000 square miles) of the most difficult terrain, without even matching the sort of troop levels the Soviets once mustered, who themselves were often bogged down and hard-pressed to counter Mujahadeen attacks. Guerrilla strategy dictates if the enemy brings to bear overwhelming numbers and firepower against you, you shift locale where he is weaker and less prepared. With the Taliban operating in some 70 percent of Afghanistan's territory, there are no guarantees on what sectors of the country remain quiet. 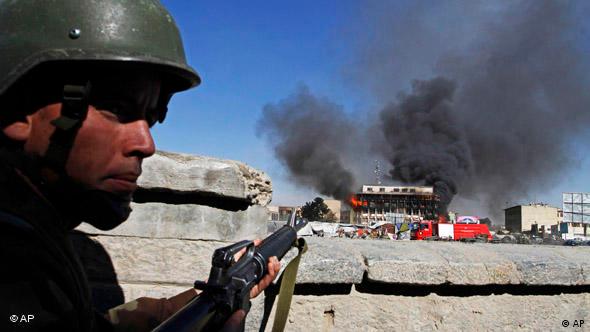 The Taliban struck the heart of Kabul's government district

And as the suicide bombing attacks in Kabul earlier this month showed, as President Karzai was swearing in his cabinet, not even the Afghan capital is safe. During the spectacular bombings and shootings some 20 Taliban fighters detonated bombs and stormed a host of key government ministries in the very heart of supposedly the most secure government district, across from the central bank and a stone's throw from the presidential palace.

Although the attackers were dealt with swiftly, the incident reflected that the capabilities of the Afghan National Army, the Afghan National Police and the National Security Directorate or intelligence service, are still sorely lacking. Building the capacity of all three remains crucial to any hope of an eventual allied withdrawal.

A timetable for a hoped-for Western pullout is likely to be discussed in London but Professor Chalmers says interpretation of an allied retreat is premature. "The time scale for a military pull out is condition-based, its not strict clock watching. Obama said a draw down could begin later in 2010 if there is progress with the surge, but a draw down is not total withdrawal so we have to see what happens in the next year, and if the fighting over the next few weeks in Helmand is an indicator of where things will go."

Quite recently the outspoken US General Stanley McChrystal, the overall allied commander in Afghanistan, reiterated that a foreign army alone could not secure military victory in Afghanistan, that it was crucial that the Afghans themselves bear the brunt of the fight themselves as soon as possible and that some sort of political accommodation be reached with the Taliban. Distasteful as that notion may be to some, the allied strategy may well be to reach the negotiating table through overwhelming firepower and a position of strength, rather than one of weakness and impasse where the generals find themselves now.

As matters stand now, talking to the Taliban is not a prospect yet. And if the US shoulders most of the bill for fighting the war, there will be calls for greater international financial support to help carry the burden of reconstruction. And while there are some lofty and noble sounding resolutions in the draft of the Afghan compact devised for the conference, on achieving greater transparency in government, curtailing corruption and fostering economic growth, these are just that, well-intentioned words and not much more.

The entrenched corruption of Afghanistan's government according to the UN consumes $2.5 billion (1.8 billion euros) yearly of international aid funds. The plan on the table to be discussed at the conference for more aid to be distributed directly through Afghan ministries could well raise some eyebrows among donor nations. In short we may not see too many dramatic changes in London or any great surprises as the die for Afghanistan is already well cast.

Positioning itself ahead of the London conference on Afghanistan, Germany has said it will nearly double development aid to the strife-torn country and send in at least an extra 500 troops. (26.01.2010)

After eight years of war, the US and Europe are scrambling to retool the Afghan mission. Instead of creating new concepts of nation building, leaders should read Lawrence of Arabia, argues a foreign policy expert. (12.12.2009)

Watch this DW report on the German government's new approach to Afghanistan (27.01.2010)