Thailand protests reveal growing generational gap on political issues | Asia | An in-depth look at news from across the continent | DW | 27.10.2020 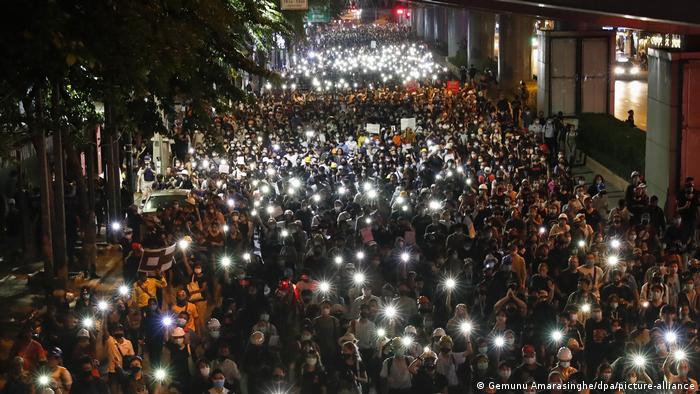 Polarized politics are not new in Thailand. For years prior to a coup in May 2014, led by current Prime Minister Prayut Chan-o-cha, Bangkok was engulfed by rival protests between liberal-minded "red shirts" and pro-establishment "yellow shirts."

But the youthful crowds occupying Bangkok's streets are exposing new fault lines within Thai society. The older generation, which considers the monarchy as beyond reproach, is largely supportive of the pro-royal establishment. The younger generation are demanding the reform of the once-untouchable institution in an unprecedented show of defiance.

"We are marking a milestone in history and setting new standards," on discussing the monarchy in public, a protester named "Sam"* told DW.

The progressive movement says it does not want to abolish the monarchy, but are calling for reforms so people can criticize the institution, which is shielded by some of the world's harshest lese-majeste laws.

They are also calling for Prayut's resignation and a new constitution, which they claim is currently skewed to favor the pro-establishment ruling party.

The monarchy was considered 'God-like'

Sam did not tell her parents when she went out to join protest. She said they would try to dissuade her by saying it's not safe or that demonstrators are being manipulated into joining rallies.

"My parents are conservative and hyper-royalists, but you also have to understand that they were fed [pro-monarchy] propaganda for generations, and expressing your own opinions and questioning those in power was wrong," Sam said.

However, Thai youth are more exposed to free information online, and they are breaking taboos by questioning the authority of the controversial current king, Maha Vajiralongkorn, and talking about lese majeste laws.

Sam said her parents' generation would not have dared to talk about these things, "because the monarchy was considered God-like."

However, Sam was shocked that many supporters of the monarchy seem to support violence that was used to subdue protesters on October 16.

"Honestly, I can respect that my parents love the monarchy and don't want reform, but I cannot understand my mom thinking that the protesters deserved to be dispersed with high-pressure water cannon as setting an example," she said, adding the current situation has caused friction with her mother.

"It's like when politics are involved, she loses some of her motherhood. Normally, she's such a caring mom, but it looks like when I do something that goes against her political beliefs, she doesn't seem to care about me."

Another young activist named "Dao" told DW that it is too tiring to convince her family, and she simply agrees with what they say most of the time.

"It's my decision not to bring it up. I don't think I can change their opinions. Besides, they wouldn’t listen anyway and I don't want to fight about it." 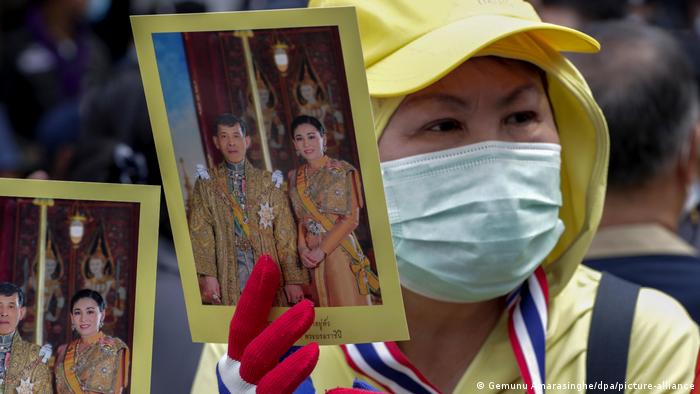 Thai's who support the monarchy often dress in yellow at protests

Dao said her family thinks students-led protests insult the monarchy, create disorder and allow foreigners interfere in Thai politics. Dao said she was uncomfortable discussing the monarchy with her family.

"I've never felt this uncomfortable talking about it. I've never really thought it would be dangerous or risky. When I gossip with my friends, that's it," she said, adding she fears for her safety and job security if she speaks her mind.

'It doesn't really affect us'

However, not every family is divided. "Fon" often discusses politics with her extended family. Apart from her relatives aged over 60, who still view the monarchy as indispensable, most of Fon's family agrees that Prayut should resign.

Although Fon can discuss her ideas openly, she is forbidden from joining the protests.

"My mom fears for our safety. One time my brother wanted to go, but she told him to just follow the situation from home. She said things like 'you don't know if the government would hire someone to stage violence'," Fon said.

She said that her family discusses the situation, but doesn't explicitly support the protest movement."I think my family has never been politically active, because no matter who's in power, it doesn't really affect us so we don't feel like we have to start changing things."

'They are using children as tools'

"Yui" is an older Thai, who holds Prayut in high regard and disagrees with reforming the monarchy.

"The prime minister has not done anything wrong. He is not corrupt and does not cause any harm to the country (...) The monarchy never hurts the people, never causes any trouble and only helps the people, so why is there a need to reform?"

No one in Yui's family has gone out to protest because they claim misinformation and disinformation to being used to mislead young people and insult the monarchy.

"There are no reasons to support the three demands. We don't support the use of children as tools in the protests to sow discord in family and society. These protests are staged to benefit some groups of politicians, not for the country and the people," she told DW.

'Why wouldn't I be able to think for myself?'

However, some parents support the pro-democracy movement. "Bua" feels fortunate that both of her parents understand why she goes out to protest, and have long been disillusioned with the monarchy.

"If he [the former king Rama IX] really did things for his people, how come he was this rich? (...) Why didn't he say no when soldiers stage coups?," Bua's father said.

With her extended family, the situation is different. Her uncle, whom she called a "salim" — a derogatory term for conservative, pro-establishment Thais — does not share a view of reform.

"It's very difficult to get through salims. They are like robots (...) I tried discussing with my uncle in the past but he always responded with answers that made me feel like I'm stupid and manipulated yet unaware of it," Bua told DW.

"Why wouldn't I be able to think for myself? He is just in denial and doesn't want to admit that he, an adult, could be wrong and has been fooled all this time. He can't accept that young people can think for themselves," Bua said, adding she doesn't talk politics with her uncle anymore, and puts her energy into protesting.

"My mom has told me that she let me go [to the protest] because I have to determine my own future. She won't be here forever, but I have to continue living."

*The names of all interviewees have been changed to protect their identities.