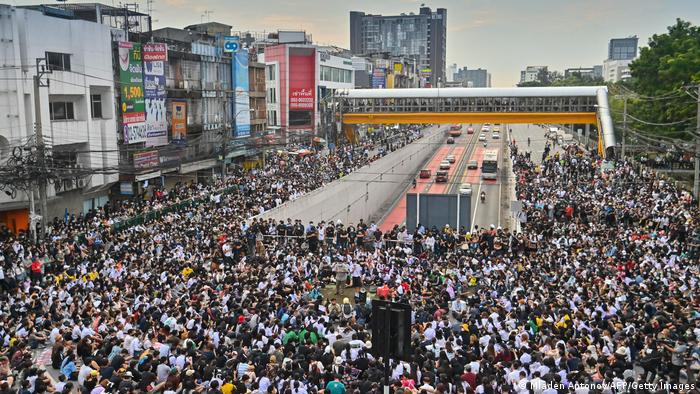 "I fight day by day. When there is a gathering, I will go. I will go until I can't, and if can't go, then I will post about it. I will not stop discussing my thoughts with those around me. I can only pray every day that there will be no violence," 29-year-old Joy (name changed), the owner of a recycled-plastic business, told DW.

Thailand has been witnessing mass anti-government protests over the past several days.

The student-led protesters want Thai Prime Minister Prayuth Chan-ocha to step down, the constitution to be amended to make it more democratic, and reforms to the monarchy to have it conform to democratic norms.

The government has sought to weaken the protesters' resolve over the past week by arresting their leaders, declaring a state of emergency for Bangkok that makes all rallies illegal, and trying to physically impede their gatherings, including by closing mass transit stations.

DW spoke to some of the protesters (all names have been changed to protect their identities) to understand the reasons behind their demonstrations, what they hope to achieve and how they view the nation's all-powerful monarchy, which is shielded from criticism by what's regarded as one of the world's most draconian lese majeste laws.

The protesters also spoke about how they are using social media to get around Thai authorities' attempts to censor the media and stifle public discourse.

Below are some excerpts from the interviews.

DW: Why are you protesting?

This is the first time that there are discussions about the most important source of problems in Thai politics — the relationship between the military and the monarchy. The protesters speak about fixing the "system," not "individuals." Everyone is calling for a real constitution, written by the people for the people and not written by those belonging to dictators. They are also calling for fair elections.

Chai, 23, university student who has been taking part in the protests since October 14:

I have come out to protest because I have seen that the administration of this government has lasted for 6 years and it's by a group of people who came to power through a coup and are ruling the country in a dictatorial manner. The law is being applied unfairly and this government is the most corrupt. A lot of things that happened because of this government have led not only me but also most Thais to realize that we need radical change and real democracy.

DW: What do you expect to come out of the protests?

I, personally, expect to see humanity again. Equality, freedom, including the freedom of speech. A better life governed by a better government that has been chosen in a fair election and really represents the people and acts in the best interests of the people. The government of the people for the people.

Joy: I think it will not end easily. It may last 10 or 20 years but we have to fight because we have no other choice. This is not the first fight of Thai people and probably not the last. We have had 13 coups and 29 prime ministers over the past several decades. More than half of those who came to power through coups are soldiers, and the monarchy is often used as a means of legitimizing power.

We are stuck in this loop. It's like our country is cursed. The terms of civilian prime ministers and ministers chosen by the people are often short-lived, so what we expect is at least a fair and verifiable parliamentary system. We need a transparent electoral system. We want to choose our representatives.

DW: How do you see the anti-government movement evolving in the coming months?

Joy: I believe in the potential of the youth who are the main driving force of this gathering. I admire that they are able to defend themselves, be flexible, and be able to adjust their gathering plans at any time. What binds us together in this movement are not the leaders or any benefits but the principles that we share.

SK: I think after the arrested protest leaders are released and the issues are brought to the parliament, the movement's flow will fade in anticipation of the government's response. The pattern will change. It could be in the form of small group discussions in different areas of the country speaking about the injustice of the current system and more about the reform of the monarchy.

There will be more debates both on the internet and in the real world, except if the government does something severely unjustified, such as arresting participants or speakers. The movement is ready to make a bigger return at any time because it is not like before. Protesters can assemble within one hour and clear the area in 15 minutes via social media, so we can expect that this type of movement will continue.

DW: What's your view of the king and the monarchy in general?

Chai: It can be said that the role of the monarchy is very important to this country because the king is above all laws and has the constitution on his side. He can be above all, can commit wrongdoing without being held accountable, can enforce the disappearance of anyone he's not satisfied with, can use the country's tax money without having to work for it at all.

I want to let the readers know that Thailand is not a country of any king but of all people because the nation is the people. The existence of a king in this country does not make the nation prosper but rather makes Thailand unable to develop any further. If having a king is really good, Thailand would definitely not be like this right now.

Lin, 54, business owner who has been protesting since August:

The monarchy must be reformed (so that it is) answerable to the constitution. The king approved every military coup and he probably does not know how to manage the country because he doesn't know what the people want. The government allocates so much budget (to the monarchy). Why not use it to develop his own country? Rather, he spends it abroad. That's very selfish.

What does Thai king do in Germany?

What does Thailand's king do during his long stays in Germany?

DW: Do you think the government censoring messaging apps and the internet will slow down the movement?

Chai: This would definitely have been effective before because it could disrupt the flow of information. But right now, I think you can no longer keep people in the dark. There are now Facebook, Line, Telegram and various channels that we can give information or inform in real time about what's happening, so censoring or anything that will cause a loss of momentum is certainly difficult these days.

Joy: Not at all, but it's a challenge. Shutting down the BTS and MRT, Facebook pages or arresting every protest leader who have come out to speak, look really funny to new generations because besides not solving any problem, it also makes the government look stupid.

The government has this absurd thought that the punishments would disperse the movement. I think it's a very ancient way of thinking. The more the content is blocked, the more eager I become to follow what's happening. From having never participated in any protests, I myself, for example, decided to join the movement.

The interviews were conducted by Emmy Sasipornkarn