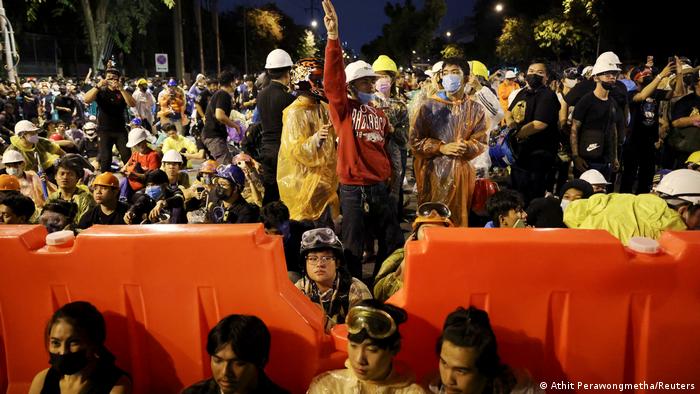 Thailand's government on Thursday scrapped an emergency decree it imposed last week in Bangkok in an attempt to end months of student-led demonstrations.

The emergency rules included a ban on public gatherings of more than four people, allowed media censorship and gave police special powers to detain protesters. But rather than quell the unrest, the measures brought tens of thousands of people onto the streets of the Thai capital.

Protesters are demanding the resignation of former army chief turned Prime Minister Prayuth Chan-ocha, a new constitution, and reforms to the powerful monarchy. They have given Prayuth a three-day deadline to step down.

In a taped speech that was broadcast on national television, the embattled prime minister appealed to Thais to resolve their differences through the parliamentary system. He also called an extraordinary session of parliament next week to discuss the crisis.

"While I can listen to and acknowledge the demands of protesters, I cannot run the country based on protester or mob demands,'' Prayuth said. "The only way to a lasting solution for all sides that is fair for those on the streets as well as for the many millions who choose not to go on the streets is to discuss and resolve these differences through the parliamentary process."

The government's decision to cancel the state of emergency came as Bangkok Civil Court was preparing to rule on motions to revoke the decree on the basis that it illegally abridged freedom of assembly.

The country's pro-democracy movement, which has held daily rallies over the past week despite the emergency measures, said Prayuth's revocation of the decree made no difference.

"He's still seeking to stay in power while ignoring all the people's demands. The emergency decree shouldn't have been issued in the first place," Sirawith "Ja New" Seritiwat, one of the protest leaders, said.

The protesters accuse Prayuth, who toppled an elected government in a 2014 coup, of rigging last year's general elections to ensure the military held on to power — a charge he denies. Back in 2014, he had promised swift elections, ultimately delivering them five years later.

Changes to the monarchy

The protesters are also pushing for curbs on the constitutional powers of the king, sparking a backlash from the royalist establishment. Supporters of the monarchy have held their own demonstrations in recent weeks, although the turnout is usually lower than at the pro-democracy rallies.

Absolute royal rule ended in a 1932 revolution when Thailand became a constitutional monarchy. Since then, the country has seen more than a dozen coups.

Its arch-royalist army, which positions itself as a protector of the monarchy, claims that such interventions are necessary to protect the king. Under Thailand's royal defamation law, criticism of the monarchy is punishable with up to 15 years in prison.