Terror suspect's brother: 'My reaction as an Arab is revenge'

In an exclusive interview with DW, the brother of terror suspect Jaber Albakr has threatened the Syrian refugees who turned in his brother. He also said he intends to sue Saxony's police over Jaber's suicide. 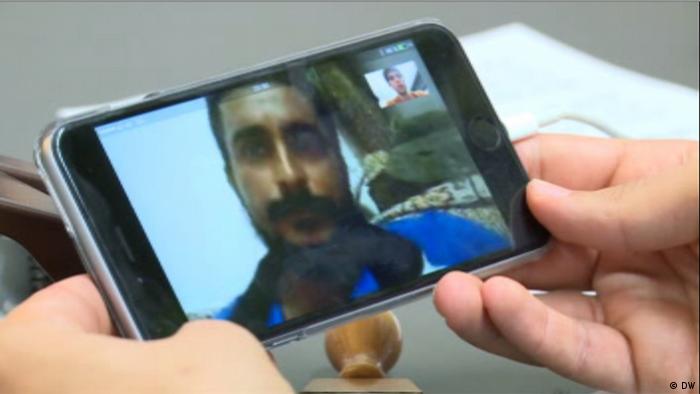 The Berlin bomb suspect Jaber Albakr who committed suicide this week had showed earlier signs of radicalization. He posted jihadi videos online before travelling to the Syrian city of Idlib, his brother says. (15.10.2016)

The Syrian terrorist suspect who committed suicide in custody was not classified as an "acute suicide risk" before his death, the Leipzig prison warden has admitted. Jaber Albakr was found hanged with his T-shirt. (13.10.2016)

The Syrian heroes of Leipzig

For days, police special forces had been hunting Jaber Albakr. But in the end he was arrested by three Syrians - who have now become the heroes of their neighborhood. Fabian von der Mark reports. (11.10.2016)

Opinion: Albakr and his scandal-ridden death

Despite close monitoring, the terror suspect Jaber Albakr was able to kill himself in prison. His suicide has dealt a blow to the anti-terror fight, writes DW's Marcel Fürstenau. (13.10.2016)

The brother of deceased terror suspect Jaber Albakr issued a warning to the Syrian refugees who handed over his brother to the police in an exclusive interview with DW's Jaafar Abdul-Karim on Saturday.

"My reaction as an Arab is revenge."

When asked to clarify what he meant, Alaa Albakr said: "You understand. I have nothing more to say about it. I will come as a refugee."

Twenty-two-year-old Jaber was tied up and handed over to police in Leipzig on Monday by three other Syrian refugees, who have since been described as heroes. They reportedly invited the fugitive to stay in their apartment, only to realize shortly afterwards that Albakr was being sought after by police.

In his first video interview after his brother Jaber was found dead in a Leipzig jail cell after committing suicide, Alaa told DW he was convinced of his brother's innocence.

Jaber told his brother that some imams in Berlin mosques tried to radicalize him.

"In Germany, they tried to brainwash him for a while," he said, adding that, "it is important to know that it was only for a short time and they didn't manage it. If they had, he would have flown back to Syria and never come back."

"I assure that Jaber was not a terrorist and is not a member of IS," he insisted.

Alaa Albakr called for Germany to return his brother's body and also announced he will take steps against Saxony's police department.

"The German police killed him," Alaa told DW. "I want to sue the police in Germany, in the state of Saxony."

Alaa Albakr is 30 years old, married, and lives with his parents and seven siblings in Rif Dimashq near Damascus. According to Albakr, his brother Jaber is a martyr of whom the family is proud.

In a raid on Jaber Albakr's Chemnitz apartment last Saturday - during which the suspect apparently escaped - police found 1.5 kilograms (3.31 pounds) of TATP. The homemade explosive was the same as that used in the deadly jihadist attacks in November in Paris and in Brussels last March.

After a two-day manhunt, he was handed over to police, but committed suicide in his cell on Wednesday.

The thwarted plot has renewed focus on security after Germany took in 890,000 refugees last year, many from Syria.