President-elect Trump's unprecedented call with Taiwan's leader and his subsequent tweets have caused a lot of friction in Beijing. China and Taiwan are waiting to see what policy will take shape after he takes office. 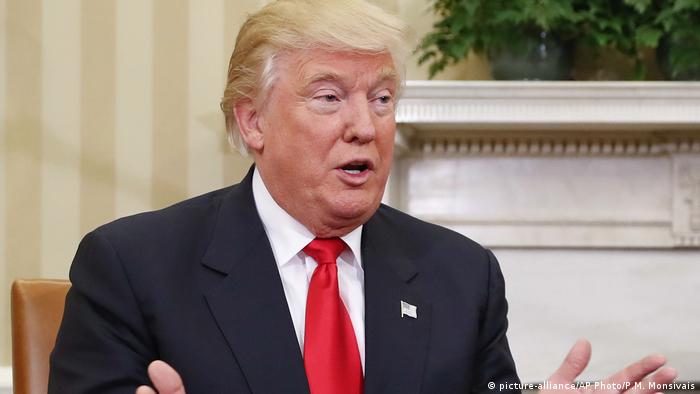 The conversation between Taiwanese leader Tsai Ing-wen and US President-elect Donald Trump on December 2 unleashed a wave of foreign policy predictions and diplomatic doomsday scenarios. In the days following the 10-minute phone call, China issued a diplomatic complaint and speculation has been rampant over the incoming administration's foreign policy intentions.

Trump's ensuing Twitter diplomacy did not reassure anyone that US relations with China will be business as usual after he takes office on January 20. And in an interview with Fox News on Sunday, Trump said he wouldn't feel "bound by a one-China policy unless we make a deal with China having to do with other things, including trade."

Beijing on Monday expressed "serious concern" at Trump's remarks, with foreign ministry spokesperson Geng Shuang warning that any changes to US policy toward Taiwan could damage diplomatic relations between the US and China and render cooperation "out of the question."

"We urge the new U.S. leader and government to fully understand the seriousness of the Taiwan issue, and to continue to stick to the one-China policy," Geng said.

Although it is unclear whether Trump will carry through on his words and use the "one-China" policy as a bargaining chip in his negotiations with Beijing, so far one thing is certain: with his unpredictable and eyebrow-raising statements and tweets, Trump has already managed to cause a lot of unease in China.

And by publically referring to Taiwanese leader Tsai as "president," Trump violated the longstanding "one-China" diplomatic protocol by indirectly recognizing Taiwan as a state with an autonomous government. China maintains that it has sovereignty over Taiwan as a "breakaway province."

Vice President-elect Mike Pence said the telephone call was a "courtesy call" and that Taiwan had "reached out to offer congratulations." Trump tweeted after the conversation and emphasized that Tsai had contacted him.

However, facts that emerged in the days following Trump's conversation with Tsai indicate that the call was the result of careful planning by his advisers and was not a spontaneous decision from Tsai or an unintentional gaffe from Trump. And members of the president-elect's foreign policy cadre have expressed support for the US forming closer ties with Taiwan than during the previous presidential administration.

Did Trump's advisers set up the call?

Richard Bush, Director of Northeast Asian Policy Studies at the Brookings Institution in Washington D.C. and former chairman of the American Institute in Taiwan, told DW that Asia specialists loosely associated with the Trump camp made the call possible.

"They had been looking for ways that in their mind would upgrade the relationship with Taiwan. And it was their idea," he said. "Obviously Trump accepted the idea." Bush added that no one has yet directly admitted to arranging contact between Trump and Tsai. "People whose fingerprints could be on this are denying any involvement. They are making policy before they are in the administration."

According to a report published in the New York Times on December 6, Trump's campaign had been in regular contact between May and October with representatives from the Taipei Economic and Cultural Representative Office (TECRO) in the US. Documents included with the report - filed by the law firm Alston and Bird - specify that former Republican Senator Bob Dole worked as a lobbyist on behalf of TECRO and arranged meetings with members of Trump's campaign team.

The disclosure document listed Dole's lobbying activities, which included assistance in bringing a Taiwanese delegation to the Republican National Convention in July and including supportive language for Taiwan in the Republican Party foreign policy platform. Senator Dole also convened a meeting between embassy staff and Trump's pre-election transition team. Dole is a long-time member of the Republican establishment, and was steadfast in supporting Trump's candidacy.

The report also said that Dole helped arrange the phone call between Trump and Tsai, with Dole quoted as saying that the firm "had some influence" in making the call possible.

US-China relations, carefully developed over decades, have been turned upside down after one phone call by Donald Trump. He has confirmed his reputation as an unpredictable partner, writes Philipp Bilsky. (03.12.2016)

During a TV interview, US President-elect Donald Trump criticized several of China's policies, such as those on tariffs, North Korea and the South China Sea. Washington's one-China policy dates back to the 1970s. (12.12.2016)

China has lodged a diplomatic protest with Trump after the US president-elect spoke Friday with Taiwanese President Tsai Ing-wen on the phone. The US broke off diplomatic relations with Taiwan in 1979. (03.12.2016)

"In terms of what was said it was a courtesy call," said Bush. "There is a diplomatic significance to it and we will see where all of this goes." Bush added that it was speculative to say the call was a leverage move against China ahead of Trump's administration. "It's not clear what they were trying to get," he said.

Whether or not the call was the first step of the incoming Trump administration's move toward stronger ties with Taiwan remains to be seen. However, the breaking of a 37-year-old diplomatic protocol is the strongest pillar in rhetorical groundwork that is being put in place, on which a different US policy regime towards China and Taiwan could be based.

Tiffany Ma, Senior Director of Political and Security Affairs at the National Bureau of Asian Research (NBR) in Washington D.C. told DW that it is too early to determine concrete policy directions for Asia from the next administration.  However, Ma added that a change in course is possible. "Given the president-elect's rhetoric, it does seem as though new options might be on the table if the US is unwilling to follow precedent simply for the sake of doing so and be constrained by concerns over China's reaction," she said.

The Chairman of Idaho's Republican Party and a Trump adviser with strong ties to Taiwan, Stephen Yates, told Taiwanese media during a recent visit to Taipei that American diplomacy in Taiwan was a "myth." Referring to Trump's Twitter response to criticism of the conversation with Tsai, Yates said, "In 140 characters or less, he pretty much broke a myth that I think has stood in the way of common sense in Washington for multiple decades."

Speaking to reporters at the Republican National Convention in July, Yates said that the Trump campaign was "strongly supportive" of the language on Taiwan, which says the US will help Taiwan defend itself if China were to violate the principles of the Taiwan Relations Act. The text also says that China's behavior had negated the "optimistic language" concerning future relations from the last platform in 2012.

"Even without a significant policy shift, it is well within the framework of the current US approach toward Taiwan to engage in more and higher level exchanges and visits," said Ma, adding that this could include increased arms sales, greater diplomatic support for Taiwan's international space and enhanced trade relations.

The language in the Republican Party platform also reaffirmed the US' "six assurances" to Taiwan from 1982, which include making arms sales to Taiwan without first consulting China and not formally recognizing Chinese sovereignty over Taiwan.

"If the incoming administration is serious about revitalizing the US-Taiwan relationship, then it makes sense to signal its position early on," said Ma.

"They seem to believe that China would be willing to accommodate," said Bush. "And there was a period in the early George Bush administration when the same sort of attitude existed."

The last diplomatic crisis between the US and China over Taiwan was in 1995 after former Taiwanese President Lee Teng-hui was permitted to give a speech at Cornell University in upstate New York. China responded by conducting a series of missile tests in the Taiwan Strait near Taiwan island.  In turn, the US sent two aircraft carrier battle groups to the region as a show of military support.

This time, Beijing has responded only with a "stern representation" from China's foreign ministry, although on Saturday, Reuters news agency reported that the Chinese air force conducted exercises of long-range military aircraft over waters near Taiwan.

"The Chinese government is watching the situation with restraint," Shi Yinhong, Director of the Research Inistitute of American Studies at Renmin Univsersity in Beijing, told DW. "It will strive to maintain the stability of relations during Trump's administration." Shi added that China is watching with concern and vigilance to see if Trump's position changes after taking office and that they could become more confrontational if relations turn negative.

Economist: Trade war between US and China a 'clear and present danger'

Economist: Trade war between US and China a 'clear and present danger'

"One should also say there are other things and other initiatives that Trump might take that bear on China's interest that have nothing to do with Taiwan that would lead to a very negative assessment on the Chinese part," said Richard Bush.

Before Trump's telephone transgression, he had called for massive tariffs on Chinese goods sold in the US and accused China of currency manipulation. Once Trump takes office, China will be watching closely and is sure to test the new administration to see if the rhetoric translates to action.

"The US-China relationship will certainly continue to have elements of both cooperation and competition," said Tiffany Ma, adding that if China holds Taiwan at fault for stronger ties with the US, then the Trump administration would need to respond in Taiwan's defense. "How the Trump administration will find ways to constructively manage differences with China will be key, as not everything can be a 'deal' for negotiation," she said.

Bush said that he doesn't think Trump's telephone call and subsequent tweets will cause a crisis in US-China relations. "It depends a lot on what Trump does to follow this up in terms of our relationship," he said. "If Trump, for whatever reason, stays within the general framework of US-China relations, he will probably be excused for this one little initiative," he said. "If Taiwan goes unpunished is another question and one can ask, 'was it worth it?'"