China has lodged a diplomatic protest with Trump after the US president-elect spoke Friday with Taiwanese President Tsai Ing-wen on the phone. The US broke off diplomatic relations with Taiwan in 1979. 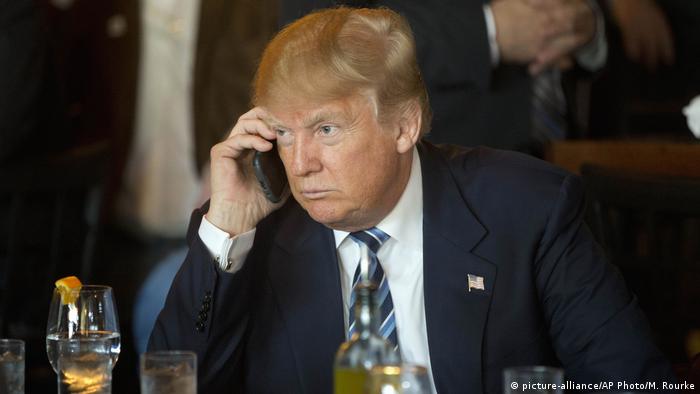 China has lodged a protest with the "relevant US side" on Saturday after President-elect Donald Trump spoke by phone with Taiwanese President Tsai Ing-wen, China's Foreign Ministry said.

The ministry urged Trump to uphold the "one China" principle, adding that the US should carefully handle the Taiwan issue to avoid a disturbance in Sino-US ties. The wording of the statement implies that the protest went to the Trump camp, but the ministry did not provide further information.

Trump's phone call with Tsai on Friday is what is believed to be the first such contact from the US government since 1979.

Hours after the call, China's foreign minister, Wang Yi, expressed the hope that relations with the US wouldn't be "interfered with or damaged" as a result of the call. He also described it as a "petty action" by Taiwan.

"This is just the Taiwan side engaging in a petty action, and cannot change the 'one China' structure already formed by the international community," Wang said.

On Saturday, Taiwan asked for China to view the call "calmly."

"We call on China to face the new situation in the Asia-Pacific region and work with us towards developing a benign cross-strait relationship and create a new way that will benefit the development of peace, prosperity and stability for the region," Taiwan's policy making body on China, the Mainland Affairs Council, said in a statement.

The United States cut off relations with Taiwan after then-US President Jimmy Carter formally recognized Beijing as the sole government of China in 1978 and adopted the "One China" policy in 1979. The US embassy shut its doors in Taipei in 1979.

China considers Taiwan a breakaway region and opposes any official contacts with the Taiwanese government.

Ned Price, spokesman for the White House National Security Council, said the conversation will not result in any changes to the long-standing US policy on "cross-strait" issues. "We remain firmly committed to our 'One China' policy," said Price.

During the election season, Trump advisors called for arms sales to Taiwan to counter China's growing military strength, although he has yet to formulate exact policies concerning Taiwan.

Trump is set to assume office in January. Tsai has been president of Taiwan since May 20. She vowed she "will not bow" to China on the issue of sovereignty.

But he later claimed the president-elect is signaling "major pivots in foreign policy without any plan."

Trump also spoke with Philippine President Rodrigo Duterte in what one Duterte aide dubbed a "very engaging, animated" phone call Friday. Both leaders invited each other to visit their respective countries in 2017.

In a video released by Duterte aide Bong Go, the Philippines leader is seen smiling while talking to Trump. Trump's transition team did not make an immediate comment on the conversation, and it was unclear whether Trump brought up Duterte's tough policy on drug trafficking that has left thousands of people accused of selling and using drugs dead.

During the video, Duterte told Trump, "We will maintain…and enhance the bilateral ties between our two countries."

The Philippines is an important ally to the United States in East Asia, although relations have soured since Duterte took office in June. Duterte called current US President a "son of a whore" and told him to "go to hell" if he visited the Philippines. Duterte also threatened to sever decades-long ties with the US and work with China.

The Trump transition team said Trump discussed with Ghani "the grave terrorism threats facing both countries and pledged to work more closely together in order to meet these growing threats" in a statement.

Trump spoke with Lee on "the long history of good economic, political, and security relations between the United States and Singapore," according to the same statement.