Tackling Pakistan′s pathetic economy: Is Imran Khan up to the task? | Business | Economy and finance news from a German perspective | DW | 11.10.2018

Tackling Pakistan's pathetic economy: Is Imran Khan up to the task?

Almost two months after Imran Khan took office as Pakistan's PM, reality is knocking hard on the doors of his government. Wracked by a raft of financial challenges, the country has become an economic basket case. 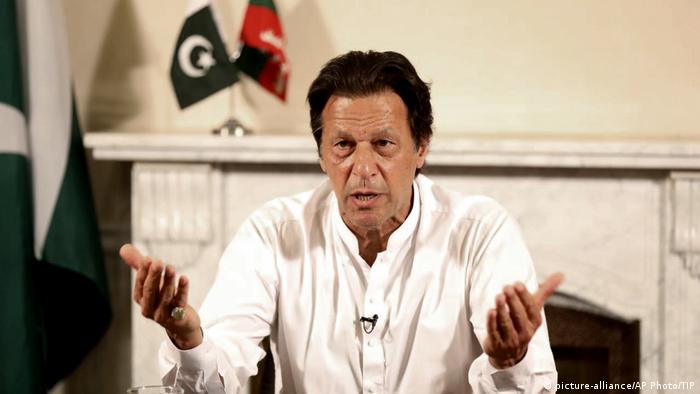 Pakistan's economy is a perpetual mess. It's not hard to come to this conclusion considering the fact that the country has gone begging to the International Monetary Fund (IMF) 14 times since 1980 seeking bailouts. The current Pakistani government, led by the newly elected Prime Minister Imran Khan, has once again gone cap in hand to the IMF requesting yet another rescue.

The South Asian nation, home to over 200 million people, is beset by a range of financial and structural challenges. Pakistan has long imported more than it exported. The result is a surging current account deficit — now estimated at over 5 percent of gross domestic product (GDP) — and a looming balance-of-payments crisis.

For decades, Pakistan's real per capita income growth has underperformed many of its peers. Corruption and tax evasion remain rampant, resulting in reduced revenue for the state. Less than 1 percent of Pakistanis, for instance, pay income tax.

State resources are also often squandered. Defense spending takes a higher priority than allocating resources for more productive purposes like education and healthcare. That's a consequence of the Pakistani military's obsession with maintaining a military, political and diplomatic competition with neighboring India.

Furthermore, Pakistan faces a chronic energy crisis, resulting in regular power outages across the country. The economy is highly vulnerable to shifts in global crude prices, as 80 percent of its oil needs are met through imports. The recent rise in oil prices has aggravated the nation's already fragile financial situation.

Many state-run firms are loss-making and the government has failed to make enough headway when it comes to their privatization as well as cutting bureaucratic red tape and improving ease of doing business.

The problems have put heavy pressure on the nation's currency, with the Pakistani rupee falling by more than 20 percent in four big drops since December. Its foreign exchange reserves are also dropping rapidly. In September, they stood at $8.4 billion (€7.25 billion), barely enough to cover Pakistan's debt payments due through the end of the year.

IMF to the rescue — once again

When Pakistan has previously found itself in this situation, it has knocked on the doors of the IMF. But this time around, the nation's leaders appeared to be a bit reluctant to approach the global lender, as it is likely to impose tough conditions on government policy, limiting Prime Minister Imran Khan's vision of an Islamic welfare state.

"As the price for a deal with Pakistan, the IMF is likely to demand a further sharp tightening in fiscal and monetary policy as well as structural reforms aimed at raising more revenue and improving the business environment," Gareth Leather, Senior Asia Economist at Capital Economics, said in a research note.

Khan, whose new administration took office in August, said on Wednesday that his government will seek help from "friendly countries" alongside any assistance provided by the IMF.

Khan has also promised to recover funds stashed abroad by corrupt officials, and embarked on a series of populist austerity measures such as auctioning luxury cars owned by the prime minister's house and crowdfunding to build a dam in the country's north. He has also vowed to turn around loss-making state-run enterprises and reform tax collection.

"This prime minister and his team seem serious about focusing on Pakistan's economy, and moving beyond superficial economic management to deeper reforms, given that they have engaged some prominent Pakistani economists to help them out," Madiha Afzal, an assistant professor at the University of Maryland's School of Public Policy and a non-resident fellow at the Brookings Institution, told DW. "Some of their rhetoric and actions, however, are markedly superficial, which does not bolster confidence in their approach," she added. 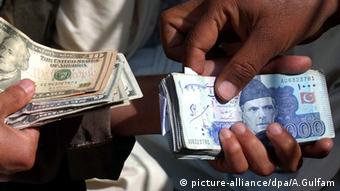 Pakistan's economic woes have put heavy pressure on the nation's currency, with the rupee falling by more than 20 percent in four big drops since December

To combat the economic woes, many Pakistanis seem to be expecting help from their ally China, often called an "all-weather friend" to Pakistan due to the two sides' close political, economic and military ties as well as aligning strategic interests. But it is unclear how generous Beijing will be in helping its strategic partner weather the current economic storm.

Many inside and outside Pakistan also partly blame China for the troubles afflicting the Pakistani economy. They argue that the deteriorating balance of payments is a result of higher import spending by Pakistan on materials from China for the China-Pakistan Economic Corridor (CPEC) project.

CPEC is a Chinese-led series of ambitious transport and energy projects to build infrastructure in Pakistan that some estimate at over $60 billion. It forms part of Beijing's wider Belt and Road Initiative (BRI).

As part of CPEC, China provides loans to Pakistan, which imports equipment and services from China. This adds to Pakistan's debt and worsens the current account deficit.

If investments are sound, CPEC has the potential to boost the Pakistani economy. But observers say the terms and conditions of much of the Chinese lending are opaque, and interest rates on some loans may be higher than Pakistan can afford.

Acknowledging that Pakistan needs more infrastructure development, the IMF's chief economist Maurice Obstfeld recently cautioned: "It is important that the design of the projects... be solid and excessive debts which cannot be repaid are avoided."

One implication of Islamabad approaching the IMF now is that Pakistan will likely have to be far more transparent about the lending terms of its CPEC projects than it has been so far. "This transparency may have positive implications in terms of generating public support for renegotiating some CPEC deals which are not necessarily beneficial for Pakistan," said Afzal.

Regardless of CPEC, there are a number of difficult measures Khan's administration will have to take to pull Pakistan out of its economic malaise. Economists say the government needs to tackle tax evasion and broaden the tax base by removing tax loopholes and exemptions.

It has to privatize some loss-making and inefficient state-owned firms, which are acting as a major drag on the economy.

Reforming the product and labor markets, particularly the energy and agricultural sectors, will also have to be high on the agenda. Also, the Pakistani rupee, experts say, has to be fairly valued, flexible and market-determined.

If Khan's administration manages to push through at least some of these measures, it could significantly improve Pakistan's growth trajectory. "While a sharp slowdown in growth looks inevitable over the coming year, Pakistan's longer-term prospects should improve if the IMF deal leads to a sharp fall in the country's external vulnerabilities and an improvement in its business environment," said Capital Economics' expert Leather.

Moving into a small house instead of using the prime minister's office, and spending less money on security — PM Khan's measures are commendable. But economists say Pakistan needs serious efforts to improve the economy. (31.08.2018)

With its economy in distress, Pakistan's new government is expected to soon go cap in hand to the IMF seeking yet another loan. But US Secretary of State Pompeo's recent comments highlight the tough road ahead. (01.08.2018)