The Syrian regime has said it is planning an offensive with Russia to take Aleppo from rebels as Islamist groups press an offensive. A month-long cease-fire appears to be rapidly breaking down. 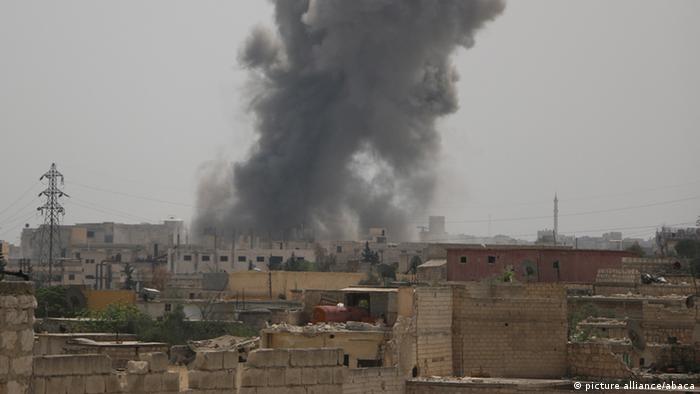 The Syrian military and allied forces, backed by Russia's airforce, are planning a major operation to clear Aleppo of rebel groups, Syria's prime minister said Sunday, as a fragile cease-fire between the regime and rebels appears to be breaking down.

"We, together with our Russian partners, are preparing an operation to liberate Aleppo and block all illegal armed groups that have not joined the cease-fire agreement or violated it," Syrian Prime Minister Wael Nader al-Halki was quoted as saying by Russia's TASS state news agency.

The late-February "cessation of hostilities," brokered by the United States and Russia, has led to a lull in fighting on multiple fronts, but rebels and the regime continue to accuse the other side of violations.

Aleppo city and the countryside are controlled by a patchwork of rebel groups and the Syrian regime, backed up by Lebanese Hezbollah, allied militias and Iranian forces on the ground and Russian warplanes in the air.

Over the past 10 days, the al-Qaeda affiliated al-Nusra Front has launched an offensive in southern Aleppo. Al-Nusra and the "Islamic State" (IS) are not part of the cease-fire.

According to the Syrian Observatory for Human Rights, a monitoring group, 35 combatants on both sides had been killed in a 24 hour period late Saturday and early Sunday in southern Aleppo. Fighting between regime forces and rebels was also reported in northwest Latakia's Turkmen Mountains and the Douma outside the capital Damascus, where the regime reportedly dropped deadly barrel bombs.

Al-Nusra operates in some of the same areas as other rebel groups, making both a target for regime forces and the Russian air force.

Continuing an alliance that has defined the Syrian conflict, Islamist rebel factions including Ahrar al-Sham, one of the largest Islamist rebel groups and a party to the cease-fire, are also actively fighting alongside al-Nusra, according to SOHR.

"Al-Nusra, Ahrar al-Sham and their allies are pushing an offensive to take back turf seized around Aleppo by the regime before the truce came into force," SOHR director Rami Abdel Rahman told the AFP news agency. 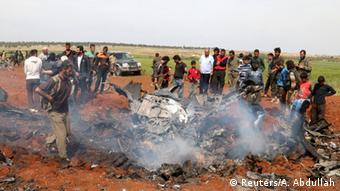 That assessment is shared by the Syrian regime.

"Some armed groups operating in the southern and western parts of Aleppo that previously announced their affiliation to the 'opposition' have recently put themselves under the command of the Jabhat al-Nusra leadership and got involved in provocations and breaches of the agreement," Syrian state media SANA said on Sunday, referring to the opposition negotiating with regime representatives in UN-backed peace talks.

Those stalled talks were set to resume in Geneva on April 13, but the future of Syrian President Bashar al-Assad remains a sticking point. The opposition demands Assad step down before a transition, while the regime and its backers Russia and Iran argue the Syrian people should decide.

Russia and the regime used the nearly month-long lull in fighting to free up resources to dislodge 'IS' from the ancient city of Palmyra. That victory carried both strategic and symbolic significance, opening up the possibility of Syrian forces advancing on 'IS'-controlled Deir ez-Zor and Raqqa further to the east and sending a message to the West that the regime may be the best bet to defeat 'IS.'

Meanwhile, rebel factions in northern Aleppo have used the cease-fire and lack of contact line with Syrian forces to turn their attention on 'IS' territory along the border with Turkey. The Turkish-backed Sultan Murad Brigade and Faylaq al-Sham have punched out from the area around Azaz over the past week, taking key territory along the Turkish border and the border town of al-Rai.

The rebels are now approaching Dabiq, the name of the group's English language magazine and a city steeped in 'IS' mythology. 'IS'' founder, Abu Musab al-Zarqawi, believed Dabiq would be the scene of a war of Armageddon. Losing the town would be a blow to morale.

The string of defeats for 'IS' appears to be strengthening al-Nusra, a rival of the so-called caliphate.

Rebel advances along the border suit US objectives. The US-led anti-'IS' coalition has prioritized sealing the Turkish border to cut off supplies and foreign fighters to the terrorist group. Concerned over Syrian-Kurdish gains, Turkey wants to prevent fighters affiliated with its own Kurdish rebel group, the PKK, from joining the autonomous cantons of Afrin and Kobane.

The Syrian Democratic Forces (SDF), a group dominated by Syrian Kurdish YPG fighters, have suggested they may cross the Euphrates River, a move Turkey has said is a "red line." To date the SDF have only crossed the Euphrates further to the south of the border after taking the Tishreen dam in December. Turkey considers the YGP to be a terrorist organization.

If the Turkish-backed rebels are able to advance further and seal off the Turkish border it would be a severe blow to 'IS.' But any frontline between rebels and the YPG in areas now under control of 'IS' could also open up the possibility of clashes with the YPG, which is backed by the US and considered one of the best fighting forces against 'IS.'