Kurdish groups have declared a democratic federal system in regions of northern Syria that border Turkey. Washington, which has been supportive of Syrian Kurds, said it does not recognize autonomous zones in the country. 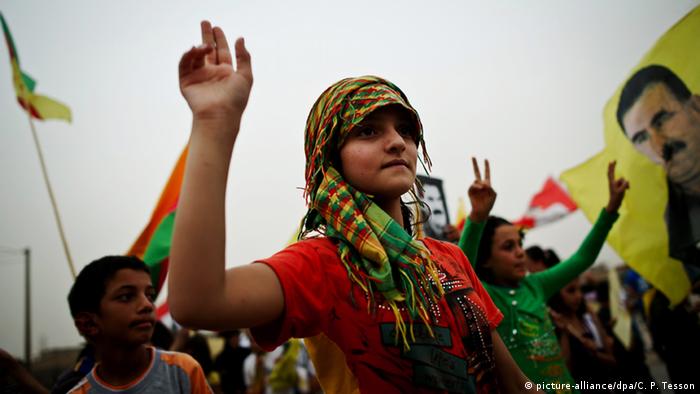 The Kurdish Democratic Union Party (PYD) of Syria, along with several allied groups, on Thursday announced that three Kurdish-led regions voted in favor of a democratic federal system under the name Rojava-Northern Syria.

"The Rojava-Northern Syria founding document was adopted by the constituent assembly," the PYD said in a tweet.

Kurds took to the streets in the Syrian city of al-Qamishli near the Turkish border to celebrate the announcement.

"We will preserve the oneness of the Syrian land and the right of all elements living under the federal system [in Syria's Kurdistan]," said al-Salum at a press conference.

"We had a successful experience with the system of canton in the past and this decree of federalism system will help resolve issues in Syria," al-Salum added.

Kurds in Syria, the country's largest ethnic minority group, have been systematically persecuted by Syrian and Turkish authorities, according to human rights groups Amnesty International and Human Rights Watch.

The Syrian government decried attempts to undermine the nation's territorial integrity in a statement made by a foreign ministry source, carried by the official Syrian Arab News Agency (SANA).

"Raising the issue of a federation or that of federalization would affect the territorial integrity of Syria, which goes against the constitution, national concepts and international resolution," the source said.

The PYD and other Kurdish groups were not invited to UN-backed negotiations between Damascus and the Saudi-backed mainstream opposition alliance High Negotiations Committee (HNC).

"We're not interested in self-autonomous ... areas in Syria," Kirby said, adding that federalism would have to be an option explored by all parties of the conflict.

The US has been supportive of Syrian Kurds fighting the "Islamic State" militant group in Syria, with Defense Secretary Ash Carter on Thursday saying the Kurds "have proven to be excellent partners of ours on the ground in fighting ISIL (Islamic State)," referring to the PYD's armed wing, People's Protection Unit (YPG), according to AFP news agency.

The ongoing standoff at a Syrian prison shows that the so-called "Islamic State" still has the means to fight. However, experts say that IS doesn't pose a global threat due to lack of money, fighters and ammunition.