Christians, Kurds join forces against 'IS'

In the Syrian town of Tel Tamer, life has been set on hold. Buildings stand empty and the people who used to live here have gone. In their place rebel fighters try to stop "IS" advances. Hannah Lucinda Smith reports. 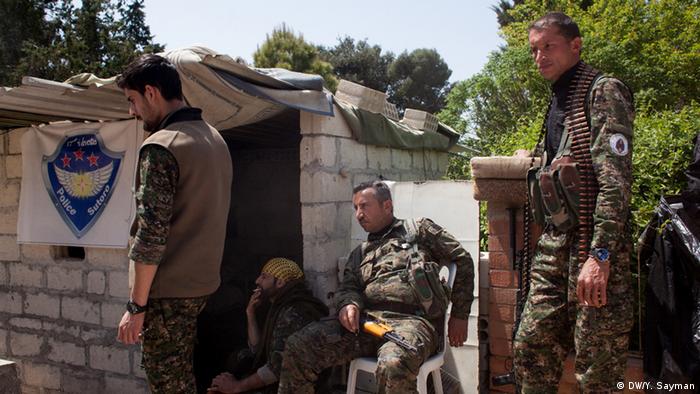 "We are surrounded from three sides," says a fighter in the hilltop sniper position that looks out across the river and to the plain beyond. "If IS wants to push into the town, they will probably be able to take it." As if in agreement, a burst of sniper fire rings out from the enemy lines.

If Tel Tamer falls to "Islamic State" (IS) fighters, the people who used to live here will probably leave Syria - and maybe the Middle East - for good. This is the heart of the Khabur Valley, a small strip of Christian towns and villages marooned in a sea of Kurdish and Arab territory. Far from the regime-held areas of Aleppo and Damascus, where Syria's Christians can find safety in numbers, the people of Khabur have been in a precarious position since the country's revolution took an Islamist turn.

In late February their worst fears became manifest. IS forces launched an early morning blitzkrieg assault on the Christian villages to the south of the river, taking over 200 civilians hostage and forcing the others to flee for their lives.

"We woke up hearing bombs and we knew it was IS," says George, a swarthy man who wears a huge silver crucifix around his next. "We took our children, found a motorcycle, and left the village. They were shooting at our backs as we left." Now sheltering with his family in Qamishli, he is still coming to terms with that morning. "We didn't imagine this, it just wasn't in our mind that this could happen. It is a peaceful region, there are no regime bases there." 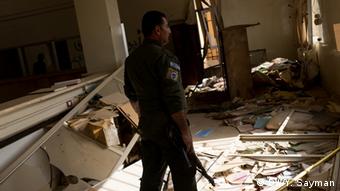 Can the rebels hold off IS fighters permanently?

The Kurdish People's Protection Units (YPG) and the Syriac Military Council (MFS), a Christian anti-regime militia, have moved in to stop the jihadists advancing north and crossing the river into Tel Tamer. But while they have managed to retake some of the villages, they do not have the numbers or weaponry to dislodge IS from the area. The threat of a new assault is real and ever present, and so far only 20 of those hostages have been released. On the day before Good Friday and as Christians around the world prepared to celebrate Easter, Tel Tamer was declared a military zone and its people were asked to leave.

The exodus is so recent that Tel Tamer is full of ghosts. In the Ekhaima nightclub, once the center of the town's nightlife, the tables are still laid out around the dance floor. Thirty Christian soldiers in green fatigues take their places and bow their heads as they say Grace. "Our soldiers who fall down in the battle, Be the light for the road of our revolution."

David Jendo, one of the last civilians left in Tel Tamer, takes a place alongside the soldiers. "This place used to be full of life," he says sadly, looking around at the bar that used to be full of Arak (aniseed brandy - the ed.), and the stage that is still lit with blue neon. "Every night it was packed with people eating and drinking and dancing." 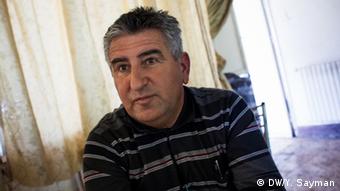 David Jendo was one of the last civilians in Tel Tamer

David stayed behind as the others fled, organizing a team of local men into a home guard. Armed only with hunting rifles and skills learned during the military service that they completed decades ago, they nonetheless say that they will defend their town to the last. Syria's President Bashar al-Assad - the self-proclaimed defender of the country's minorities - has done little to help the Christians of Khabur.

"The regime left this area in 2012, and then the Islamists came in," he says. "When their propaganda started, all the Arabs in this area turned against us. Our neighbors of 30 years changed within half an hour."

The Christian MFS started out as a pro-revolution militia in late 2011, allied with the Free Syrian Army. But they soon found themselves pushed out of an opposition that was being taken over by sectarian Islamist interests. With few places to turn they linked up with the Kurdish YPG, who were forging out their own state in the northeast.

It is an uneasy alliance. The YPG has never openly opposed the Syrian regime as the MFS have, and no-one knows what kind of deal can be struck between the two groups should the Kurds get the autonomy that they have coveted for so long.

So far the alliance has saved Tel Tamer, but three days later the Christian soldiers got a stark reminder of how vulnerable they now are in a region that was abandoned by the regime and left up for grabs to the strongest player: David Jendo was assassinated as he drove his car along the road out of Tel Tamer.