With regime gains, fight in Syria turns against Turkey

Gains by Syria's regime in the Aleppo province may be the beginning of the end for the rebels. The battlefield losses have also delivered a blow to Turkey's policies on Syria. 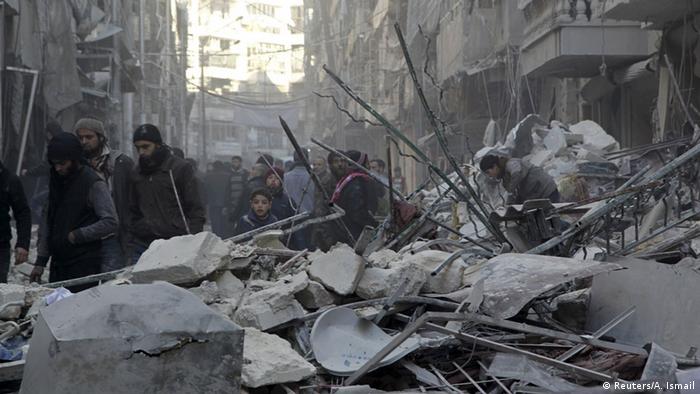 Backed by relentless airstrikes by Russia, government forces and allied Shiite militia may have altered the course of Syria's five-year civil war over the past week, delivering a series of blows to rebel factions that have also managed to challenge Turkey's core strategic interests.

Days after virtually encircling Aleppo, where rebels have controlled the eastern portion of the city since 2012, the regime and allied Hezbollah and Iranian forces have advanced to within 25 kilometers (15 miles) of Syria's border with Turkey and the key rebel-held logistical hub of Azaz.

Ankara has been one of the main external backers of the armed opposition centered in Idlib and Aleppo provinces, acting as a conduit for weapons, supplies and fighters as well as a safe haven for opposition forces.

The narrow sliver of contested rebel territory running north from Aleppo to the border is under Russian and regime assault from the south and by the "Islamic State" (IS) from the east.

From Syria's western canton of Afrin, the YPG Kurdish militia, which have ties to Kurdish rebels in Turkey, are advancing on Azaz, a further blow to Turkish- backed rebels. 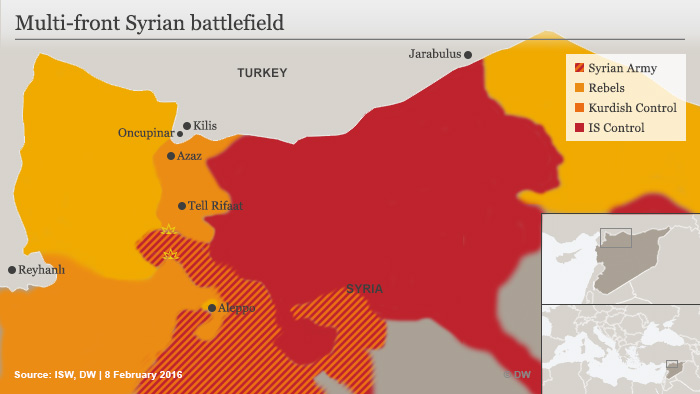 The Kurds - who on and off have fought against Turkmen and Islamist rebel groups backed by Turkey - are benefiting from the airstrikes by Russia and appear to have reached a tactical understanding with Russia and the regime.

For Turkey, the section of territory controlled by IS along the border between Azaz and Jarabulus is vital because it separates the noncontiguous Kurdish-controlled cantons of Afrin from territories in northeast Syria.

The regime advance in the northern Aleppo countryside adds to a string of successes on the back of four months of Russian airstrikes in the south, Latakia and Idlib that helped to scuttle UN-backed peace talks in Geneva last week.

Now in a position of strength, Russia and the regime appear to be trying to divide and crush the opposition and, in some cases, negotiate the withdrawal of rebels and the restoration of regime control in certain towns and neighborhoods.

Otherwise, the regime will continue with a strategy of siege, starvation and bombardment.

Hossam Abouzahr, the editor of Syria Source at the Atlantic Council, told DW that the balance of power has shifted so dramatically that the armed opposition faces an existential struggle for survival.

"The asymmetrical balance is so much in favor of the regime," he said. "It is the beginning of the end for the opposition. They are not able to hold out against the Russian air force."

Abouzahr said that once Aleppo is surrounded, the question will be whether the regime will leave the city trapped and conserve resources to go after other rebel-controlled areas one by one or fully lay siege and retake the city.

The regime offensive in Aleppo city and province has sent tens of thousands of civilians fleeing to the border with Turkey as fear mounts that Syria's largest city and former commercial hub could face a sustained siege.

Turkish officials have warned that hundreds of thousands of people could ultimately be forced to the border.

Aaron Stein, a senior fellow at the Atlantic Council, told DW that recent events in Aleppo have undermined Turkish interests but the country still has options.

"Ankara still has a lot of cards to play," Stein said. "Turkey is the most important external backer of the Syrian opposition and will not simply look on as Russian, regime and Iranian forces surround Aleppo."

Stein said Ankara's options included increasing support to the opposition in Idlib through the Bab al-Hawa border crossing or demanding that Syrians displaced from Aleppo be protected inside Syria opposite the border crossing at Oncupinar.

The idea of a safe zone has been floated by Turkey since the early days of the conflict but has garnered little international support.

German Chancellor Angela Merkel has met with Turkish Prime Minister Ahmet Davutoglu for more talks on reducing the influx of migrants to Europe. Both condemned the Russian-backed airstrikes over Aleppo in northern Syria. (08.02.2016)